Formerly known as Slab City, GCW The Last Resort will take place from Oak Canyon Park in Silverado, California. Originally, this event was set to emanate from Slab City, which is an area that exists in the desert outskirts of California. However, due to various circumstances, Game Changer Wrestling moved the event to a different location. Name change aside, GCW is set on providing fans with a night of entertainment featuring stars from around the world. Take a look at the confirmed card for this Saturday’s event. 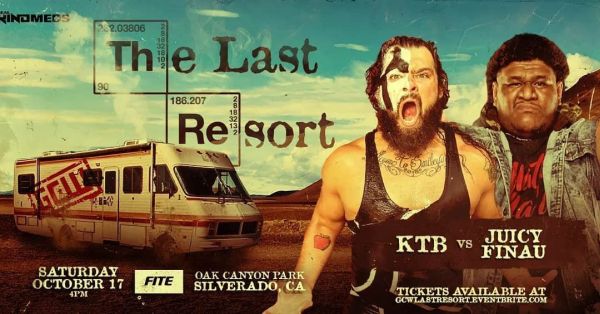 One of the feel-good stories to come out of The Collective was Juicy Finau. He showed tremendous work ethic, assisting the ring crew, even traveling from California to do so. His humble demeanor and work ethic resonated with talent and fans alike. Now, the “New Era Savage” has his next big break ahead of him in the form of a singles match at GCW The Last Resort. His opponent will be no small challenge, however, as evidenced by the work of KTB. As one half of Ironbeast, KTB has seen tremendous success in GCW. Earlier this month, at Joey Janela’s Spring Break 4, Ironbeast bested The Rascalz. To keep his momentum rolling, KTB will have to put an abrupt end to the feel-good story in question.

Chris Dickinson was rather busy during The Collective as well. Case and point, at Josh Barnett’s Bloodsport 3, Dickinson faced Jon Moxley in a hard-hitting effort. This was perhaps the most important match in the career of the “Dirty Daddy,” and though he lost, he proved he could hang with the AEW World Champion. At GCW The Last Resort, Dickinson’s next challenge will come in the form of the high-flying Adrian Quest. Keep in mind that Quest has been absent from GCW since March; this last appearance took place at The Wrld on GCW, where he wrestled Tony Deppen to a no-contest. Between Dickinson’s brutality and Quest’s agility, this will be a match to keep an eye on. 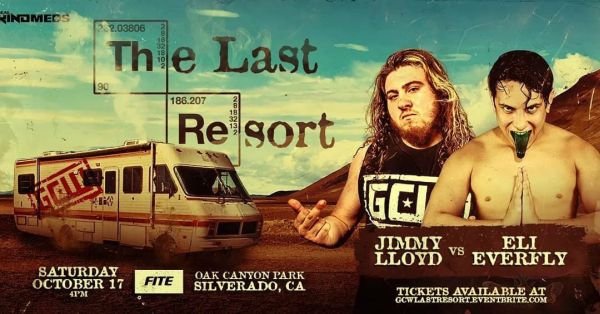 No GCW event will be complete without wrestlers throwing caution to the wind. Jimmy Lloyd is arguably GCW’s poster child in this respect, putting his body on the line for the sake of victory. The “Different Boy” was a consistent presence throughout The Collective, but at The Last Resort, he will be back in singles action against Eli Everfly. Though “The Fly” had been absent from GCW since January, his independent wrestling efforts have been consistent. For example, at Violence X Suffering‘s Legends Never Die, he bested Smiley and TJ Crawford in a fast-paced three-way contest. In Everfly’s GCW return match, will he be able to overcome Lloyd’s propensity to take things to the extreme? 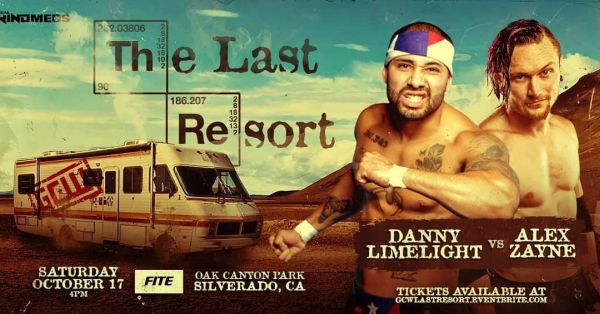 The Last Resort marks the GCW debut of Danny Limelight. Wrestling fans may be familiar with the New York native from his various appearances on NJPW Strong and UWN Primetime Live, both of where he’s been plying his craft. The Last Resort may prove to be Limelight’s biggest break yet, and what a challenge that awaits him. Not unlike Limelight, Alex Zayne made his own appearances on NJPW Strong. However, he’s been a regular performer for promotions ranging from GCW to Black Label Pro. It’s been months since Zayne’s last singles victory in GCW. At The Last Resort, Zayne plans to add another victory at the expense of the debuting Limelight. 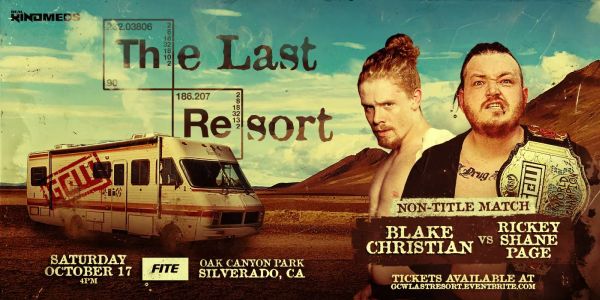 It’s difficult to dispute that Rickey Shane Page is the man in Game Changer Wrestling. However, even the reigning GCW World Champion has setbacks. This past Saturday, at JJSB4, Page issued a non-title open challenge. Multiple wrestlers, including Danhausen, attempted to answer the challenge, but were quickly dispatched by Page’s group, 44OH. What the group didn’t expect was the surprise arrival of Orange Cassidy. Not only did the “Freshly Squeezed” AEW star answer Page’s challenge, but he defeated the GCW World Champion and even sent the members of 44OH home with bruised egos.

Needless to say, Page will enter The Last Resort with an intense fire in his belly. This will pose a challenge for his opponent in the form of Blake Christian. Not unlike Page, Christian fell short at Joey Janela’s Spring Break 4, teaming with Alex Zayne and Jordan Oliver in a losing effort against Team Pazuzu. Despite this, “Air Blake” remains one of the most thrilling stars in the wrestling scene today. His work in not only GCW but Black Label Pro and even New Japan Pro Wrestling indicates a bright future for the Missouri native. However, can he overcome an incensed Page, pulling an upset on the GCW World Champion in the process? 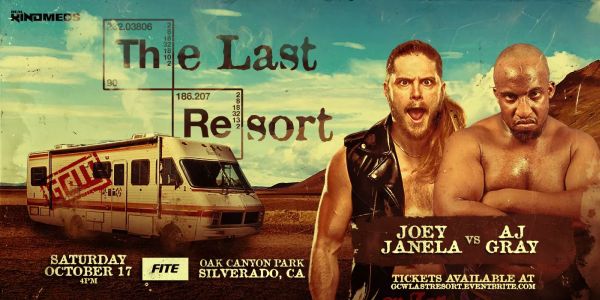 To say that last weekend was packed for AJ Gray would be an understatement. At JJSB4, he took part in the Clusterf**k Battle Royal. The following night, at Black Label Pro’s Threat Level Noon, “Rich Homie Juice” emerged victorious in a seven-way contest. Other events Gray appeared for, during said weekend, included GCW For The Culture, Jimmy Lloyd’s D-Generation F, and Glory Pro Wrestling‘s Are Ya Wrestling, Son? The explosive Gray intends to keep the momentum rolling in his upcoming match against “The Bad Boy.”

Not unlike Gray, Joey Janela’s previous weekend wasn’t without its moments. Specifically, at JJSB4, he faced Ricky Morton of the legendary Rock ‘n’ Roll Express in a barnburner of a contest. Though Janela may currently wave the AEW flag, he has remained a staple of the independent wrestling scene. His latest chapter in this particular book will involve his upcoming showdown with Gray. Between the daredevil tactics of Janela and the powerful offense of Gray, this will be one of the matches of The Last Resort to keep an eye on. 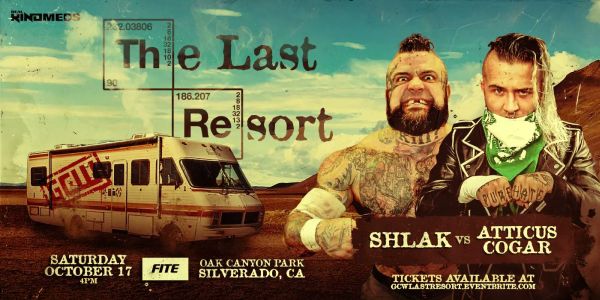 The tattooed powerhouse known as SHLAK has been absent from GCW since August. His last appearance took place at Tournament of Survival 5, where he lost to eventual winner Alex Colon. Since then, SHLAK has made multiple appearances for Insane Championship Wrestling, winning their Insane 8 deathmatch tournament. Thus, SHLAK enters The Last Resort with greater legitimacy on his side. Who can stop the path of rage brought on by “Public Animal #1?”

If any man can pose a challenge against SHLAK, it would be Atticus Cogar, a man with deathmatch expertise as well. Like AJ Gray, Cogar took part in the JJSB4 Clusterf**k Battle Royal. The night prior, at Jimmy Lloyd’s D-Generation F, he bested Colby Corino in a deathmatch. From IWA Mid-South to International Wrestling Cartel and beyond, Cogar specializes in absorbing punishment and dealing brutality in kind. To overcome SHLAK will be a tall task, but Cogar is up for the challenge. 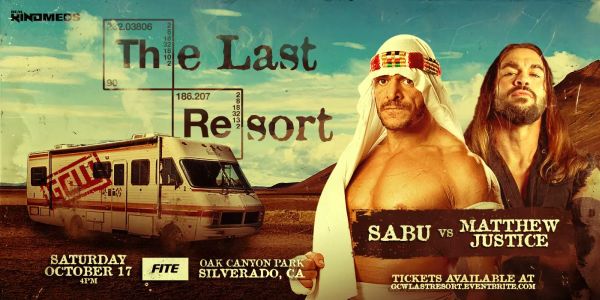 Expect this match to throw everything but the kitchen sink at viewers. On one side of the match stands Sabu, the legendary hardcore wrestler known for putting his body through punishment for victory. The former two-time ECW World Heavyweight Champion last appeared for GCW at 2018’s Joey Janela’s Lost in New York, challenging Nick Gage for the promotion’s heavyweight title. Earlier this month, he challenged Jimmy Lloyd at Legends Never Die. Simply put, Sabu has been kept busy on the independent scene. His opponent for The Last Resort will be a tall order, though.

Enter Matthew Justice, the “Great Northern Trendkill” from Ohio. Known for being a hardcore wrestler in his own right, Justice has become prominent in GCW’s recent events. Not only did he partake in the JJSB4 Clusterf**k Battle Royal, but at Effy’s Big Gay Brunch the same evening, he teamed with Levi Everett, 1 Called Manders, and Mance Warner in a winning effort. Justice is the ideal opponent for Sabu, given that they share a predilection for taking things to the extreme. Can Justice score a win over the “Homicidal, Suicidal, Genocidal” high-flyer, or will Sabu prove to be too much for “Thrash Justice?”

GCW The Last Resort will take place at Oak Canyon Park in Silverado, California, on October 17, 2020.

Tickets for the events are on sale now via Eventbrite. Attendees are expected to wear masks and face coverings. Furthermore, social distancing guidelines will be enforced throughout the event. For those that are unable to attend in person, The Last Resort will air live on FITE.tv; further details can be found below.

Stay tuned to the Last Word on Pro Wrestling for more on this and other stories from around the world of wrestling, as they develop. You can always count on LWOPW to be on top of the major news in the wrestling world, as well as to provide you with analysis, previews, videos, interviews, and editorials on the wrestling world. GCW The Last Resort airs on Saturday at 7:00 PM EST live on FITE.tv.