Generation Championship Wrestling has been putting together a tournament to crown a new women’s champion after KiLynn King  vacated the title.  The tournament, now dubbed the The Diamond Cup, has a full announced lineup now with Renee Michelle completing the tournament field.

Michelle has been seen in recent times on WWE TV when she was part of the 24/7 Championship feud between Drake Maverick and R-Truth.  Michelle, Maverick’s real life wife, was unhappy as Maverick couldn’t consummate their marriage as he was too busy trying to win, or keep, the title.  Don’t let that fool you though as Michelle is an accomplished performer in her own right.  In 2017 she even took part in the Mae Young Classic.  Most of her success has come with Maryland Championship Wrestling (MCW) where she is a former four-time women’s champion but she has also been RIOT Women’s Champion, ECWA Champion, and WXW Diamond Division Champion. 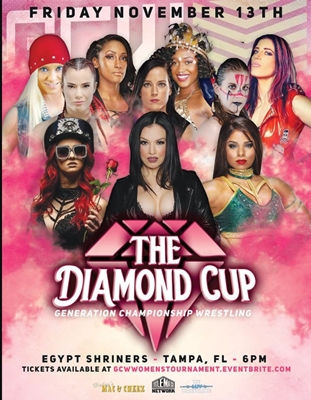 Tickets to this event can be found HERE.  And the show will air on the Title Match Network