Welcome to your 2021 NHL Entry Draft Headquarters right here at Last Word On Sports and Top Shelf Prospects. We have you covered with everything you will need to be ready for the big event. Due to the COVID-19 Pandemic and the delay in starting the NHL season, this years draft is set to take place on July 23rd and 24th. 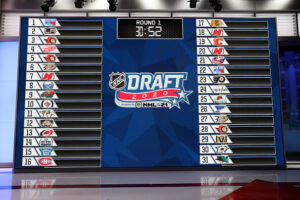 Each day, I will bring you a new player profile or topical article in the lead-up to the 2021 NHL Entry Draft. Be sure to bookmark the site, follow me on Twitter, and spread the word for the site that will bring you analytical and critical draft profiles and scouting reports! Last Word On Hockey and Top Shelf Prospects bring it to you. Make us your new headquarters for everything “2021 NHL Draft”!

Undervalued Leagues at the NHL Draft
Drafting Efficiency: NHLe vs the Buffalo Sabres

Main Photo: SECAUCUS, NEW JERSEY – OCTOBER 06: 2020 NHL Draft board is seen prior to the start of the first round of the 2020 National Hockey League (NHL) Draft at the NHL Network Studio on October 06, 2020 in Secaucus, New Jersey. (Photo by Mike Stobe/Getty Images)