Stephen Halliday is a very interesting prospect. Standing at 6’4″, 234 lbs, he’s a contradiction of hockey’s current movement. It seems that more-and-more players under 6’0″ are breaking into the game. And yet, Halliday has found how to stay competitive in a much quicker, more skill-based hockey. He’s a strong-skating winger with a howitzer of a shot and a great hockey IQ.

A few bumps in his play kept Halliday from being drafted in the 2020 NHL Draft, his first year of eligibility. But he’s taken the lump in stride, making drastic improvements to his game and looking like a much stronger prospect this year. I currently have him ranked 125th in my 2021 NHL Draft rankings: a late-fourth round selection. That’s about where he ranked in his before the 2020 Draft as well. Last year, FC Hockey’s final rankings placed him 159th and NHL Central Scouting ranked him 123rd.

But there’s one move that could really skyrocket Halliday’s rankings. His great strength, hard shot, and good vision all lend themselves perfectly to… a move to defence.

All tracked data is courtesy of Mitch Brown.

Nothing Out of the Ordinary

A move to the blue-line would be nothing new for Stephen Halliday. He actually played defence for years as a kid, as have former teammates (and fellow notable USHL prospects) Michael Citara and Matthew Coronato. That’s a surprising bit of trivia but not hard to wrap your head around. Halliday is a 6’4″, 234 lbs goliath. He’s one of the strongest forwards in American juniors, so taking advantage of his abilities on the blue-line seems to make sense.

And his history at the position makes Halliday open to a move back. In reply to the idea, he said…

“Moving back to the blue line wouldn’t be terrible! I’ve always wondered what would’ve happened if I ever did [move back to defence]… I still think I’d be able to make plays and still be effective. I’ve just never really tried it.”

But despite this prior history at the position and an openness to the move, Halliday has remained glued to the wing during his history in the USHL. He said a position has never even come up during his time with the Central Illinois Flying Aces and Dubuque Fighting Saints. And Halliday’s teammate Connor Kurth explains why that is…

“He’s a unique blend of power and skill and as a young guy coming in he made it really easy [for me] to be productive… all the guys that have played with him this year have had similar success… [Matthew Savoie, Andrei Buyalsky, P.J. Fletcher] and myself have all been able to contribute offensively fairly early and Stephen is a big part of that.”

Halliday is simply the quarterback on a Dubuque team that’s created a very good platform for their young talent. Kurth himself, another 2021 Draft eligible player, has 26 points in 32 games. 2022 top prospect Matthew Savoie has 14 points in 14 games. And, as Kurth mentions, it’s largely thanks to Halliday’s veteran presence. His smooth-playmaking and ability to open space make things a bit easier for younger players.

Halliday’s style is pretty straightforward. Looking at the tracked data, he is very average in both his zone exits and zone entries, often leaving the puck carrying up to players like Kurth and Daniel Dzhaniyev. But that’s not to say Halliday isn’t comfortable with the puck on his stick. He has great stickhandling, something that is very rarely seen in such a big player. While his lesser agility works against that stickhandling a bit, he still manages to be elusive at 6’3″. That’s a large testament to his athleticism and confidence. His strong puck control is matched by some very good intuition and awareness. Halliday never seems to get contested when he’s carrying the puck. He’s knowledgeable about how and when to create space.

And when he has the puck in the offensive end, Halliday is terrific at taking advantage of the opposing defence. Only one Dubuque player has set a higher xG-per-shot (xG/shot) than Stephen Halliday has this year. In fact, Halliday ranks fifth among all tracked USHL players in that stat, per Mitch Brown’s data. He averages 6.99 shots-per-60 (shots/60) and is one of the rawest scoring-threats in the league. In fact, Halliday ranks second among all Fighting Saints players in expected-primary-points per-60 (xP1/60), only behind the 2000-born Robert Cronin.

That’s a terrific stat, especially for a player that’s already scored 23 points in 32 games. And his high xG speaks to his potential to become a solid goal-scorer. It also highlights Halliday’s strong shot selection. He is a smart player with one of the most dangerous shots on his team. He’s an always-involved winger who’s managed 18 assists on the season, speaking to his playmaking abilities as well.

But Halliday’s defence is what stands out. He’s not flashy at all in the defensive-end… in the best way possible. His defensive ability has been among his biggest improvements over the last few years. He’s evolved into a very capable defensive-forward, showing off great awareness and a strong ability to shut down passing lanes by the smart placement of his body and his stick. What’s more, Halliday does a great job of using his size and strength to force the opposition to the outside of the rink. He’s not scared of physical play at all and has a very active stick. His ability to maintain defensive-prowess, even though he may not be as mobile as some of his teammates, is also noteworthy.

The tracked data agrees with the idea that Halliday is a great defensive player. Among all USHL forward tracked, he ranks 10th in All-Zone Defence. This is a statistical category made up of the sum of two stats: how well the player pressures shooters and how well they prevent shots. Halliday has particularly thrived in the latter metric, ranking 7th among the league’s forwards and 18th among all players, including defensemen.

That’s a pretty insane ranking for a winger. The position usually doesn’t lend itself to much defensive involvement and most of the forwards who rank ahead of Halliday are centres. But Halliday’s smarts have kept him among the top of the list, speaking true prowess to his abilities in his own zone.

And while it’s not always a good idea to compare forwards and defensemen, Halliday’s tracked data combines well with a very safe, strong, and smart skill set that would translate really well with the move. Halliday has all of the attributes a strong blue-liner needs in his great awareness, physical play, and stickwork.

Kurth spoke positively about what a move-to-blue could mean for Halliday. He said…

“I could see that… He makes a difference wherever he is on the ice. You’ve seen him back there on the power-play and with his shot, vision and size he is going to be successful in just about any role.”

Overall, Stephen Halliday doesn’t need to move to defence to be successful. He’s a strong-shot forward with the ability to make an impact in all three zones. He’s found a nice scoring-groove this season and made some impressive improvements in his play. He is well worth a draft pick, even stay at forward.

But the simple fact that his skill set could be strong in either role speaks a lot to his flexibility. On defence, Halliday would be much more removed from the transition game, one of the few areas where the tracking data places him as average instead of well-above-average. It’d also give him a chance to use his powerful shot a little more often and a bit more consistently. There would be a learning curve, for sure, but once he’s comfortable, he could easily become a big-bodied, two-way defenseman worth a third-round pick.

Oh and, of course, if Stephen Halliday moves to defence, someone would have to move to forward. When asked who he’d pick to bump up, Halliday said…

“Definitely Braden Doyle. He is unreal with the puck [and] has some of the nastiest hands I’ve ever seen. He’s a great player and even when he plays [on defence] he’s super fun to play with and a great guy off the ice to bounce ideas off of.” 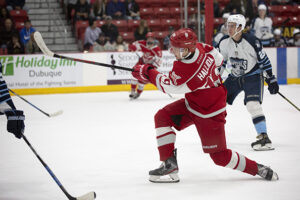