Janis Jérôme Moser is 20 years old. He was first eligible for the NHL Draft in 2018 but went unselected. He met the same fate in 2019 and 2020. Now, he’s up against the 2021 NHL Draft. It’s his final year of draft eligibility. And given his status as a Switzerland defenceman, it’s not certain that an NHL team will recognize his talent when he hits the free-agent market.

But, thankfully for Moser, he is NHL-ready. While it’s never a good idea to overestimate a player’s worth before they’ve even been drafted, Moser makes it almost impossible not to. He’s a strong and mature defenceman with a very modernized knack for offence. He’s racked up tremendous scoring over the course of the 2020-21 season while playing in Switzerland’s top leagues; one of the best leagues in Europe. His play this year has solidified his worth. He belongs in the NHL. To have him anywhere else would simply be a crime against the sport of hockey. And he’s going to make the jump very soon.

Janis Moser Is Ready To Make the NHL

There is a popular compilation of 2021 NHL Draft rankings that’s been made in an effort to create a consensus among the public scouting community. I was fortunate enough to have my own rankings featured on the list. And out of the 22 different rankings compiled, only one (one!) has ranked Moser… my own, which ranked him 47th out of 160 names.

He is simply unknown to the hockey world. And it’s blasphemous. Not only does Moser have a great floor that he’s already reached, he has a sky-high ceiling. And he is well, well worth a breakdown.

Janis Moser has incredible puck control. It’s jaw-dropping. Simply watching him skate around the ice with the puck entranced me. His smooth skating and soft hands made him impossible to get the puck from. In my viewings of him, Moser’s team often seemed a bit too packed into their own zone. But he was able to handle things with an uncanny amount of ease. Moser is incredibly smart with his defensive zone play and knows how to win the puck back, avoid forechecking forwards, and spark a perfect breakout. It’s simply clockwork when he is on the ice… at some point, his team will win back possession and manage a breakout that’s so seamless it looks like they’re the only ones on the ice.

And this is largely thanks to Moser’s passing, which might be his best asset. That’s saying a lot considering how strong his skating is but it’s completely warranted. Moser has a passing ability that would wow fans if he were in a North American professional league. I mean, just watch this stretch pass from him, that resulted in a gorgeous goal:

Moser rifles the puck up the ice in this play. And while his assist wasn’t even the flashiest on the play (somehow…) it was still well worth a standing ovation. Being able to both see such a perfect lane and deliver the puck through it is a trait that few draft-eligible defencemen have learned. It’s one that Moser has mastered.

There are a lot of things to gauge when watching a prospect pass. Of course, accuracy is most important. But the strength of the pass, the way they scan the ice, and their form can all be very telling signs as well. Moser has all of these traits down. He passes like a player that’s spent the last three years leading the charge in a professional hockey league.

Moser is an absolute genius when it comes to stepping up in the offensive zone as well. He is a very mobile defenceman when in the attacking end but often remains true to his position. When he does step up, though, his agility, speed, and great hands guarantee a strong scoring chance will be made.

🚨! And just like that it is 2-0 in Klagenfurt! Janis Moser gives @ehcbiel the 2 goal lead!#ChampionsGoBeyond pic.twitter.com/LuLmLlKsfw

Janis Moser is such a good two-way defenceman. His IQ and strength dominate his defensive play, while his skating, passing, hands, and vision make his offence look seamless. He ranked seventh in scoring among all NL defencemen and it’s very clear to see why. Nearly nobody in the league can top his ability in transition and the offensive zone. His team thrives with him on the ice.

I need to reword myself. Moser’s scoring hasn’t just been tremendous. It’s been historical. Not only did Moser rank seventh among all defencemen in the league but throughout the league’s history, only one defenceman under the age of 21 has scored more points than Moser’s 26 through 43 games. That accolade belongs to Yannick Rathgeb, who scored one more point in seven more games. In fact, since the 1990s, only one National League defenceman (>10 games played) has scored at a higher point-per-game pace than Moser. That defenceman is Roman Josi. What’s more, no NL defenceman under-21 has recorded more assists than Moser did this season.

Now Josi did this in his 19-to-20-year-old season, whereas Moser did it in his 20-to-21-year-old season. It’s a small difference but one worth pointing out. But then again, the point isn’t to compare Moser to Josi.

It’s instead to show that the only defenceman in the last 32 years, under the age of 21, to score at a higher pace than Moser in the National League is now a Norris-winning defenceman in the NHL, one that’s received Norris votes in each of the last six years. That’s an incredible achievement for Moser. There is a very real, very clear argument that his offensive production this year was the best the league’s seen from a young defenceman since Josi left for North America.

And the scoring came out of nowhere. Moser, who won the ‘Youngster of the Year’ award in 2019, only had nine points in 40 National League games last season. He had seven in 43 games the year prior. And yet, he managed to record more than the sum of both years this season. It’s a huge splash that’s not often seen in prospects.

The rarity of this insane increase in productivity can be seen perfectly using NHLe metrics; of which Byron Bader’s is far-and-away the best. Bader’s model translates point-per-game scoring in other leagues into NHL-terms, showing how much the player’s performance would’ve equated to if they had been in the NHL. 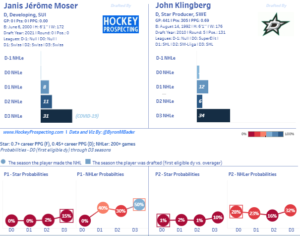 This image speaks absolute volumes to how absurd Moser’s performance really was this season. He not only shattered expectations, but he also scored at a level only matched by famous late-bloomer John Klingberg. Klingberg is now his team’s star defenceman and has received Norris Trophy-votes in two of his seven years in the league. He’s also developed into a terrific scorer, with a career-high of 67 points in the 2017-18 season.

Most of Klingberg’s points in the NHL — in fact, 80 percent of his career points — have come from assists. That’s a sentiment that Moser lives by as well, with 79 percent of his NL points coming from assists. There are admittedly a few errors with comparing these percentages. The NL and NHL are vastly different and most defencemen find the basis of their scoring on the back of assists. But, at the same time, it’s no coincidence that the only defenceman to see such terrific DY+3-booms in scoring have done it on the back of a playmaking-knack.

There are a few other fun-facts that help prop up Moser’s resume. He’s only 20 and made his NL debut at the age of 17. But despite the short time in the league and his young age, he’s managed to earn his team’s captaincy. He was named captain at the start of this season and he wore the “C” on pace to an incredible season.

Moser has also consistently torn up play for Switzerland internationally. He was named “Top 3” on Switzerland’s U17 team in 2017-18, serving as the backbone to the Swiss defence. Moser earned the same accolade in the 2019-20 season, a year where he scored four points in five games at the U20 World Juniors. He spent the year between these two “Top 3” awards working to earn the “Youngster of the Year” award in the NL.

He’s a well-accoladed defenceman who has consistently impressed. Elite Prospects’ own Cédric Martin spoke on Moser in February, saying…

J. J. Moser is an all-rounder D-man with great skating skills and who is brilliant defensively. He can also play on the powerplay thanks to his good hockey sense.

What Have We Learned?

Janis Jérôme Moser is a smooth-skating, fast-paced defenceman, much like Nick Leddy in his prime. Moser has scored in a manner that only one under-21 National League defenceman – Norris Trophy-winner, Roman Josi – has ever topped. In fact, Josi is the only NL defenceman under the age of 21 to ever have a better year than Moser, offensively. And Moser’s boom in production is something so rare that only star defenceman and famous late-bloomer John Klingberg has ever managed anything similar.

Is Moser going to become a Norris-winning defenceman like Josi? Is he going to be a future star like Klingberg? Or will he be instrumental in a Stanley Cup win like Leddy? Probably not. But the fact that he’s in the conversation with these players is truly incredible. He’s broken through barriers in a way that’s only been done by players that are now elite defencemen. Moser is ready to wear an NHL jersey next year. Any team skipping out on that opportunity isn’t worth the ice they skate on.

Janis Moser may be 20 and entering his final year of draft eligibility. But the draft is about fostering future NHL talent. Moser is NHL-ready. He has reached his floor of fringe-bottom-six worthiness. And the sky is the limit, as shown by the players that have walked his path before. I ranked Janis Moser in my Top 50. He might be worth an even higher pick. A smart GM in need of immediate help on their NHL blueline should do everything in their power to get him onto their team.