Welcome to Last Word on Hockey’s 2021 NHL Draft Class introductions. The 2020 Draft class was a blast, and the 2021 NHL draft should be too. Alexis Lafreniere was the first overall pick for the New York Rangers in ‘20, but who will it be in ‘21? How about we here at Last Word introduce a second-year eligible prospect: Theo Rochette.

Earlier this week, Last Word on Hockey looked at one of the top second-year eligible players in the 2021 NHL Draft in Brady Burns. However, perhaps the best over-ager in the 2021 class plays in the same league as Burns. That player is Theo Rochette.

Rochette, born February 20th, 2002, in Neuchatel, Switzerland, is a 19-year-old center playing in the QMJHL. Standing at 5’10” and 165 pounds, he is undersized, similar to Burns. In his draft year, last season, Rochette played the first half of the 2019-20 season with the Chicoutimi Sagueneens, with four goals and 12 assists for 16 points in 19 games. He was dealt to the Quebec Remparts, where he played 30 games and recorded 10 goals and 13 assists for 23 points. In total, he recorded 39 points in 49 games.

So far this season with Quebec, Rochette has potted 12 goals and 18 assists for 30 points in 32 games played. Last season, he was ranked in the top-150 consistently by several outlets, and even ranked top-90 by Central Scouting. Currently, I have him ranked at 100 on my list.

Let’s start with his skating. Rochette generates strong acceleration through crossovers, which he uses consistently. He doesn’t have blazing speed, but that acceleration helps him to be at least above-average in terms of straight-line speed. There are some flaws to his skating. Without the puck, he shows a strong knee bend and ankle flexion, but when the puck is on his stick, he looks stiff. Rochette straightens out his back and doesn’t bend his knees as he does when he is without the puck. That takes away some of the speed he could attack with, and something he will have to work on moving forward.

When it comes to his overall stride, he could look to extend his legs when pushing off, which will lengthen his stride and provide more speed and power in his stride. Rochette also struggles with his edges from time to time. In a game I tracked against Val-D’or, he failed to stop when the play changed directions at the defensive blue-line, and in the process, lost all his momentum and power, with his back to the slot. A Val-D’or forward skated past him, received a pass and easily scored a goal. If Rochette had stopped, or even turned, quicker, that player would not have had a clear lane.

As mentioned several times, the transitional aspect of hockey is growing in importance every single year. Rochette, being a strong skater overall, has the attributes in order to be effective in this area. That statement rings true. When it comes to exiting the defensive zone, Rochette clears the puck with possession on 80% of his attempts, while averaging eight controlled exits per game. He is extremely involved with clearing the defensive zone and he does so with efficiency.

In terms of entering the offensive zone, he is less effective. Entering the zone with possession on 47.1% of his attempts in games I have tracked, he is below-average compared to 18 other CHL forwards that I tracked. However, he’s well-above-average in terms of controlled entries per game, which sits at eight as well. While he gets involved consistently in the neutral zone, he isn’t the cleanest when it comes to getting the puck into the offensive zone. Here’s my Z-score chart looking at these transitional stats compared to those aforementioned 18 CHL forwards, as well as other stats, below. 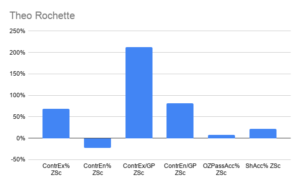 Rochette’s offensive game is based on his anticipation and processing abilities. He is so smart in the offensive zone, showing he is ahead of the play with relative consistency. He constantly puts himself in areas where the puck ends up, and he builds off the play through that read. One prime example is the goal he scored against Val-D’or.

Coming off the bench, his teammate was heavily pressured by a defenseman as he was coming from the left corner behind the opposing net and heading towards the right corner. Rochette came streaking towards the right boards when his teammate pushed the puck ahead and was winning the race to the loose puck. When he recognized this, he immediately changed direction and darted towards the net. His teammate shot the puck low from an odd angle, the Val-D’or goaltender couldn’t control the rebound or cover the puck, and Rochette dug it out, pulled it to his forehand, and slid it into the back of the net.

Theo Rochette is fairly balanced in the offensive zone, though he does spread the puck around more than he shoots. In the games tracked, Rochette has attempted 15 passes in the offensive zone, connecting on 11 of them (73.33% completion percentage). A majority of his passes are simple ones, like quick passes to the point or cycle passes. Those two pass types, simple and cycle passes, made up 13 of his 15 pass attempts. The other two attempts were centring passes. He focuses primarily on possession and offensive attack time, wearing down his opponents.

His shot is more of a focus. His offensive zone positioning, along with his ability to process the game so well, makes him a threat to get the puck in high-danger areas, as evidenced by his goal I described above. The thing with his shot is that it lacks overall power, despite relatively good accuracy. When shooting, Rochette pushes off his back foot well, generating a lot of power off his back foot. The problem is he doesn’t transfer that power onto his stick, as he doesn’t lean down on the stick. That said, a large amount of the power he generates off his back foot goes into his lead foot and not the stick. If he can work on that shooting form, he could be a very strong shooting option at the next level.

Overall, he fired nine shot attempts in the game I tracked, hitting the net on six of them. Four of those shots came from the slot area, with three hitting the net. The rest came from the perimeter and the point. Rochette constantly finds openings and drives the net, especially off the rush.

Rochette is a strong defensive forward. His positioning is strong, and he supports the defence down low. Playing a man-on-man style, he keeps his head on a swivel, locates the man who he needs to cover, and sticks with him. The issue is, when his man goes up to the point, he looks lost, as he is a center and prefers to help down low. Another issue with Rochette is his unwillingness to block shots. He actively jumps out of shooting lanes, and one such example led directly to Val-D’or’s first goal. Not only that but oftentimes he will cheat up ice for offence before his teammates fully possess the puck. However, that is not a consistent issue.

His strong defensive abilities and relatively untapped offensive potential make him a sneaky good late-round option. His lack of size paired with only an above-average skating ability are glaring issues for how he can translate his ability to the NHL level. If he can take more risks with his passing in the offensive zone, using his seemingly high hockey IQ, and improve his shot further, he could be a steal. However, it’s likely he doesn’t fully hit that potential unless he improves his skating in a big way. That said, he could be a high-energy, defensive-oriented center on a team’s third line. If he hits that potential, he could be a middle-six forward moving forward.

A really good comparable for Theo Rochette is, in my opinion, Blake Coleman. Last Word’s resident prospects expert, Ben Kerr, compared Rochette last year to Phillip Danualt. Kerr said, “Rochette plays a very fundamentally sound game. With some improvements in his strength, he should be a solid prospect. If he develops well, Rochette could become a middle-six centre, capable of killing penalties and playing against an opponent’s top line.” Coleman isn’t a blazing skater, but he is a strong one, similar to Rochette. Also, Rochette is responsible in his own end, though he does need to work out a few kinks to his game overall, and as Kerr said, could be a penalty-killing specialist in the future. Coleman will likely always be the better defensive forward than Rochette, but it’s easy to see the comparisons. However, in the offensive zone, Coleman is a better goal-scorer than Theo Rochette. Even then, he too focuses a lot on possession as opposed to setting up high-danger chances.