Welcome to Last Word on Hockey’s 2021 NHL Draft Class introductions. The 2020 Draft class was a blast, and the 2021 NHL draft should be too. Alexis Lafreniere was the first overall pick for the New York Rangers in ‘20, but who will it be in ‘21? How about we here at Last Word introduce a second-year eligible prospect: Brady Burns.

Every draft year comes and goes, but some names don’t get called in their first year eligible in the draft. However, some of those undrafted players get drafted in their second eligible season, while others end up getting signed further down the road if they’re deemed good enough. One name who was surprisingly not called in 2020 is Saint John Sea Dogs forward Brady Burns.

Burns is small, so he is reliant on his strong skating ability and shiftiness. Not only that but in his draft year, he was known for utilizing that skating and pairing it with his high IQ and vision. Those traits still remain. He utilizes those abilities in the offensive zone, as he shows his IQ by exploiting defensive zone coverages and getting open without the puck. Burns also shows his vision and IQ with his nifty passing ability, which is a trait he has expanded upon since last season.

Burns is a strong skater, with good vision and anticipation. Those traits should translate well when it comes to his transitional ability. That is true, although he doesn’t get very involved in the transitional aspect of the game very often. In fact, he has a 100% controlled exit percentage, meaning he clears the puck from the defensive zone 100% of the time in the games I have tracked. However, he only averages three zone-exits per game.

As for entering the offensive zone, he has a controlled zone entry percentage of 66.7%, but averages just 4 controlled entries per game. His average attempts are considerably lower than his peers in the CHL that I have tracked, which is a total of 19 forwards. Here’s a graph I have from data collected on Burns that I have tracked thus far. 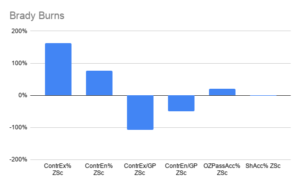 As touched on earlier, Burns is a solid playmaker in the offensive zone. If you watch a game and focus on Burns, you’ll notice on several occasions that he will take the puck on one side of the ice, take it down below the goal line, up the right boards, and try to get the puck into the slot area. He uses strong edges and high-end speed to draw defenders out of position. That opens a teammate up, and he has the vision to find that teammate and potentially set up a scoring chance. As a shooter, Burns has a decent shot, with strong accuracy, but lacks overall power. He also does not shoot the puck very often, which is indicated by his base-line shooting accuracy stat.

As for the numbers, Burns has attempted 16 passes, completing 12 of them, in the offensive zone. That’s a completion percentage of 75%, which is why he grades out positively in the chart above. Three of those 16 pass attempts were directed to high-danger areas, completing just one of them. While he moves the puck well and maintains offensive zone pressure, and despite the fact he often tries to find the soft spots in high-danger areas, he misses opportunities. A combination of teammates not getting open consistently to opponents being more aggressive on Burns to force him to make a pass to the point has been the leading contributor to a limited amount of high-danger pass attempts.

As for his shooting, he has attempted five shots, with three of them hitting the net. Only one of his shots came from the slot, while three attempts came from the perimeter and one from the point area. A common theme from his shots are to set up teammates, however. He will often shoot for a rebound or a deflection, which is why two of his three perimeter shots did not hit the net. That said, he isn’t a threat as a shooter, which is something he should look to change moving forward.

Arguably his worst trait is his defensive ability. His size and lack of strength at this point, despite being older than most of the 2021 draft class, is a red flag that limits his defensive ability. He gets low in the offensive zone, though inconsistently, but cannot do much to defend against the cycle. From a shift-to-shift standpoint, he picks and chooses when to engage himself in the play in the defensive zone. Burns does not utilize an active stick and puck-watches or chases more than he doesn’t. Finally, he cheats up the ice for offence quite often, and due to his strong skating, gets up ice rather quickly. He leaves his teammates short-handed and takes his time to get back if they fail to get it out and face another offensive attack.

Burns’ skating ability and offensive instincts give him a strong ceiling at the NHL level. The issue is opposing teams are already adjusting and defending Burns effectively with the way he circles the offensive zone looking for options. That said, at the NHL level, if he doesn’t work on his shooting ability, his offensive game will have a hard time translating. However, with good coaching and patience, as well as working on his lower and upper body strength, he could find a home at the NHL level. He most likely won’t be a top-six forward, unless there is a large overhaul to his game. However, he does have third-line upside and could carve out a bottom-six role with proper development. Improvements to his defensive game aren’t necessarily required. However, unless his offensive game becomes much better, he’ll need to be at least replacement-level in the defensive zone.

One NHL comparison for Burns would be Tyler Johnson of the Tampa Bay Lightning. Johnson is a better goal-scorer than Burns, but Johnson also has high-end hockey sense. While Burns looks to be a better skater, in terms of speed, Johnson is the player Burns should look at. That’s how he can see an undersized player with strong offence and relatively weak defence can succeed. Johnson plays a hard-nosed game, getting to high-danger areas, and a strong lower body. If Burns can develop a stronger lower-body, and improve on his shooting, Burns could play an important third-line role.