The Toronto Maple Leafs had yet another disappointing finish to their NHL season. Despite all that, there’s still something to look forward to in the 2021 NHL Draft. What prospects fit the mould of a future Maple Leaf best?

In order to determine what makes a prospect a Leafs prototype, you must enter a time machine of sorts. Reid Mitchell, the Director of Hockey and Scouting Operations, was promoted to this position back in 2015. From the 2015 draft through to the 2020 draft, the Leafs have selected 28 total forwards, from Mitch Marner to Martins Dzierkals. Of those forwards, seven came from the Russian leagues (MHL, VHL, and KHL). An additional 11 forwards came via the CHL leagues, including five from the OHL, four from the WHL and two from the QMJHL. Three more came through the USHL and two each from Finland (Liiga and SM-Liiga) and Sweden (SuperElit and SHL). An additional three players came from the NLA (Switzerland), USHS (high school), and OJHL (Ontario Juniors).

How To Determine Prototypes

Each forward selected will be separated into their respective leagues, keeping a comparable playing field for every prospect. Then, for every league, there are 15 different categories; height, weight, nationality, junior team, total games played in their respective leagues, goals, assists, points, goals per game, assists per game, points per game, and finally their U18 World Juniors performances. Every former Leaf draft pick was organized into their own leagues in order to give a maximum and minimum, along with an average, for each category, which gives the draft-eligible prospects thresholds to hit. Since we are focusing on Russia for this piece, here are the Leafs’ draft picks, separated by Russian leagues for purposes of comparable statistics, below.

As shown above, the Maple Leafs have taken their fair share of prospects via the Russian ranks. Now, there are three different Russian leagues, and they were all separated by those three leagues and given their respective draft fit score for each individual league for one final score. First, let’s look at the MHL scores.

The best fit, based on MHL production, is Prokhor Poltapov. In fact, he is ahead of the other MHL draft eligibles by quite a bit. While he is smaller than the Leafs average, at 5’11” and 174 pounds, they have drafted shorter and lighter Russian forwards before. His raw production also fits what the Leafs look for. He’s played 84 career MHL games ahead of getting drafted, which is above average. If he were to get selected by Toronto, he would now hold the most goals and points of previous Leafs selections out of the MHL. Plus, playing as many games as he did in the U18’s, and producing fairly well in them, aided his score as a Leafs fit.

Currently, he is my 49th ranked prospect. Overall, Poltapov is a strong offensive presence, with strong playmaking abilities and a really good motor. He keeps his feet moving and does a great job of anticipating where the puck will go and when to get there. His defensive game is a work in progress, but he does possess strong transitional abilities to pair with his strong offensive tools. While my high ranking puts him outside of Toronto’s reach, other rankings have him as high as 33rd (McKeen’s) and 78th (Dobber).

Two more positive fits for the Leafs are Alexander Kisakov and Matvei Petrov. For Petrov, he lands right in the middle of every statistic. He doesn’t exceed the max set by previous Leafs picks, nor does he go below the minimum in any category. As for Kisakov, he is extremely undersized and would become the smallest MHL forward that the Leafs have ever drafted before, if they select him. However, his production has been excellent in the Russian junior league, and that might entice Kyle Dubas and co. to take a shot on him.

Kisakov comes in as my 124th ranked prospect, putting him firmly in the discussion for the Leafs at some point in the middle rounds. He has good playmaking instincts and is relentless in his attack. When he has the puck, he constantly pushes the pace and tries to make something happen. However, his decision-making needs a lot of work and his style is far too high-risk, high-reward to project at the next level.

There is some real upside if he can unlock the mental side of his game. Petrov is my 64th ranked prospect, placing him within the Leafs reach in round two. Petrov is fairly well-rounded as a player. What sticks out for him is his passing ability. But generally, he doesn’t have many weaknesses, and he is fairly average to above average at mostly everything. Working on his transitional play and playing with a faster pace could go a long way for his development.

The MHL is just the first tier of Russian hockey. Moving up one more level brings you to the VHL. Here are those same aforementioned players, but this time displaying their VHL stats.

The best fits by quite a bit are the two best Russian forwards eligible in this class. Svechkov is my seventh ranked prospect, while Chibrikov checks in at 21st. Svechkov is arguably the best forward when it comes to defending his own end while possessing some underrated offensive skills. Meanwhile, Chibrikov is a really good skater, who is strong transitionally and has high-end offensive awareness. Unfortunately for Leafs fans, barring any unforeseen moves, they don’t possess an early enough pick to scoop one of these two players up in the draft.

The only other positive fit based on VHL stats is Pavel Tyutnev. Tyutnev is my 150th ranked prospect, making him a mid-to-late round option for the Maple Leafs, if they so choose. He is an intriguing prospect with a ton of work ahead of him. When he has the puck on his stick, he does an excellent job drawing defenders in and opening up his teammates in doing so. However, he does not get the puck to the high-danger areas himself. When he doesn’t have the puck, he tends to wait around for the puck to get to him. If he can work on his play away from the puck, as well as putting more emphasis on getting to the slot, he could have an NHL future ahead.

Finally, the men’s league. The second-best league in the world, some might say. The Leafs have, in the past, put a fair bit of emphasis on how well their prospects play in this top league. So which 2021 prospects meet the Leafs standards?

With only one positive fit among all the prospects KHL performances, it’s clear the Leafs have a high expectation on Russian prospects. That player was Nikita Chibrikov, and we already dove into what he can bring, along with how difficult a task it would be for the Leafs to acquire him. So, to the final tally.

Among all the leagues, putting together all the fit scores, there are three total positive fits. Those three players are Svechkov, Chibrikov, and Poltapov. Of those three, only Poltapov is within realistic reach of a Leafs selection. Leafs fans, if you select Poltapov, here’s the player you will be receiving. 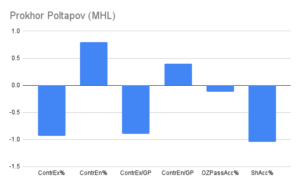 As seen, Poltapov, compared to other MHL eligible players, struggles with zone exits. To be exact, Poltapov has a controlled zone exit percentage of 40 percent, which is the worst mark among other tracked MHL forwards. However, when it comes to entering the offensive zone, he has a 70 percent controlled entry percentage, which is second. He’s also extremely involved when it comes to entering the offensive zone, being at the center of attention when his team is moving the puck up ice. His defensive zone struggles are displayed, however, in his lack of involvement, and success, when breaking out of the defensive end.

Why Are Poltapov’s Offensive Numbers Are Low

While his offensive numbers (offensive zone passing accuracy and shooting accuracy) leave much to be desired, let’s dive deeper. Attempting 13 total passes in the offensive zone in games tracked, he completed 10 of them. Of those 13 attempts, six were directed towards the middle of the ice, in other words, high-danger areas. He completed four of those attempts. As for his shots, he fired just three total in the games tracked, with all three attempts coming from the slot. Poltapov loves attacking through the slot in the offensive zone, and despite finding below moderate success, it gives him some strong offensive potential.

After reviewing all three Russian leagues and determining the best fit among forwards, what’s next? Looking at where the Leafs often find themselves selecting players, the CHL leagues will be next on the list. Click here for the Leafs CHL draft prototypes!