Welcome to Last Word on Hockey’s 2021 NHL Draft Class introductions. The 2020 Draft class was a blast, and the 2021 NHL draft should be too. Alexis Lafreniere was the first overall pick for the New York Rangers in ‘20, but who will it be in ‘21? How about we here at Last Word introduce one name to pay attention to this season: Isak Rosen.

Draft rankings are being spread throughout the hockey universe. One of the biggest takeaways from each ranking is the sheer number of Swedish players in the first round! Fabian Lysell and William Eklund dominate the early portion of many rankings. Simon Edvinsson is another big name. Then you have guys like Oskar Olausson, Simon Robertsson, and in some instances, Anton Olsson ranked highly too. I talked about a few of those guys in my top-15 piece. Thrust between all these names is another Swede: Isak Rosen.

Currently, he is my 11th ranked prospect in the 2021 Draft. He has been ranked 13th by Neutral Zone, 16th by Gabriel Foley, 17th by Smaht Scouting, 18th by McKeen’s Hockey, 22nd by Elite Prospects and The Puck Authority, 25th by Dobber Prospects, 26th by FC Hockey, 28th by Recruit Scouting and 29th by Draft Prospects Hockey.

Rosen’s game is based around his skating. Anyone could argue that Rosen is the best skater in the class, but at the very least, he’s right at the top of the list. His speed, agility and acceleration are all high end. But, as is clear with his size, he needs to work on his balance and lower-body strength. But outside of his skating, there are three pieces of his game he uses effectively: his shot, anticipation, and defensive zone play.

Before we get into those three key traits, let’s first start off with his transitional abilities. Of the Swedish players in this draft, I’ve tracked two games on Rosen, Eklund, and Lysell, as well as one game on both Robertsson and Olausson. When it came to exiting the zone with possession, Rosen did so on 40% of attempts, tied with Olausson and behind only Lysell. Lysell, by the way, was at a ridiculous 83.3% rate in this category.

When it came to entering the zone, Rosen was at the top with Olausson and Robertsson. The three of them all entered the offensive zone on 50% of their attempts. The difference, however, is Rosen had more total attempts then Olausson and Robertsson combined! That said, albeit in a small sample size, Rosen is one of the better Swedish players available in the draft when it comes to entering the zone. Rosen had eight total entry attempts, with four gaining the zone with possession, two getting dumped in, and two of them failing to get into the offensive zone.

Now, we can get into one of his three areas of strength, his shooting ability. Rosen, especially in the U-20’s, showed his ability to rip shots past goalies with consistency. He has a quick release on his shot, displaying good power and accuracy behind those shots. He also pairs his shooting with an ability to stickhandle and change the angles of his release point. This trait allows him to take shots from tough spots with tight pressure.

Adding further, he uses his stickhandling to create space for himself as well, and his ability to read the defense and time his stickhandling is huge. Rosen may not be the most efficient passer, but he certainly is not bad, and that ability to create space for himself will open up his playmaking ability as he fine-tunes his passing. When away from the puck, he puts himself in good positions and uses his speed to beat opposing defenders into high-danger spots, making his goal-scoring abilities that much better.

That’s not to say he doesn’t have any issues in his game. At the SHL level, Rosen lacks the maturity and confidence, and it’s part of the reason why he barely gets five minutes on the ice every game. He doesn’t shoot the puck much, he doesn’t stickhandle much, and he tries to play very simplified. In the two games I tracked, he attempted just four total passes in the offensive zone, completing three of them. He ranks 16th out of 26 forwards tracked with at least four pass attempts in passing accuracy at 75%. In the games tracked, he never shot the puck, being one of just three of the 30 players I tracked to not fire a shot attempt.

He lacks the confidence in the SHL, and it has prevented him from gaining trust from the coaching staff. But it also doesn’t help that he isn’t being given much of a chance at gaining more confidence because the coaches don’t want to play him. It’d be best for Rosen to play more in the SuperElit currently and gain confidence. If he takes that next step in his development while down, then he can be given a second chance.

Rosen is an exceptional defensive player as well. He’s obviously more offensively leaning, but he keeps his defensive zone responsibility on his mind constantly. When in the defensive zone, he does a very good job positioning himself. He attacks the point aggressively, but with a purpose. He also gets deep in his own zone to help defend against the cycle, as well as just supporting coverage in the slot.

His strong defensive zone play is also reflected in his zone exit stats. Rosen gets involved more than any other Swedish forward breaking out. That’s despite the extremely limited minutes he plays at the SHL level. It’s because he is constantly attacking the puck carrier when they’re on his end of the ice. Arguably, Rosen is better defensively than Eklund, and is more consistent in his own end than Lysell.

When matched up against Lysell and Eklund as a whole, he doesn’t compare well, especially with upside. Rosen is egregiously underrated by many this year. But looking at the other great Swedish forwards, it’s fair to see how he could be a bit in the shadows. That said, Rosen looks like he could wind up as a very good second line wing with special teams time. At best, he could be a good, but not great, first line winger with special teams minutes.

Also, despite being a couple years away, Rosen has a relatively safe floor. He’s a great skater, with a strong skill-set based around that. He’s solid in transition already and he plays a 200-foot game. The big question surrounding Rosen is whether or not he will be able to gain confidence in the SHL. Especially if faced with the same circumstances as this year. Vasily Podkolzin is dealing with it in Russia, as he is constantly scratched or buried in a lineup. That’s despite having been in the KHL for a bit now. If Rosen is constantly held back in the lineup, will he never get past the mental hump he is dealing with now? 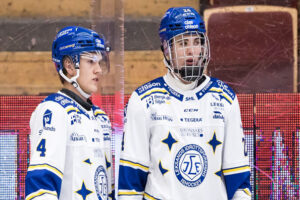