This Friday, Game Changer Wrestling returns to Los Angeles and the Ukrainian Cultural Center to present GCW Shooting Star. This event marks the final event for the promotion in the United States before its Japan tour later this month. It also appears that the independent wrestling powerhouse aims to depart in a strong way. From lucha libre action set to steal the show to the return of a former Ring of Honor world titleholder, there will be much to witness in person or live via FITE. Here’s what to know prior to Shooting Star. 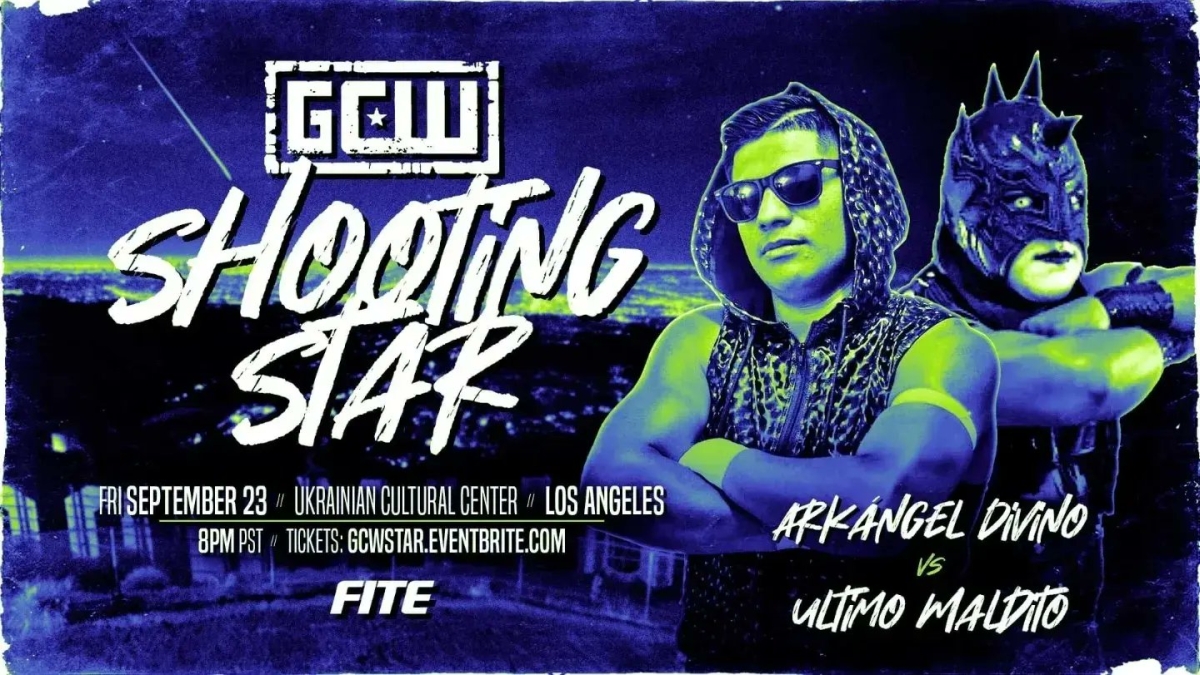 Perhaps the most unique encounter announced for GCW Shooting Star is a lucha libre match between brothers Arkangel Divino and Ultimo Maldito. These two individuals will be making their Game Changer Wrestling debuts this Friday, and while the names may not be familiar to those that don’t follow the wrestling scene in Mexico, lucha-style matches at GCW shows are known to deliver. Furthermore, they have worked together in The Crash, Lucha Libre AAA Worldwide, and elsewhere over the years, meaning they’re very familiar with each other both outside and inside of the ring. This level of familiarity should instill confidence in new viewers, as they can rest easy knowing that these luchadors will put on a show that viewers in attendance and watching at home will remember.

Divino has the distinction of being a former Junior Champion for The Clash. He held the title for 338 days, successfully defending it against names including Latigo, Astrolux, and even Ultimo Maldito himself. While Maldito doesn’t have the same championship accomplishments, he’s been able to continue toiling in AAA, oftentimes in tag team matches alongside his brother. As mentioned earlier, wrestling fans that follow the Mexico scene may be the ones most familiar with the work of these luchador siblings. For everyone else, expect Shooting Star to be an eye-opening encounter that may lead to continued GCW appearances for both. 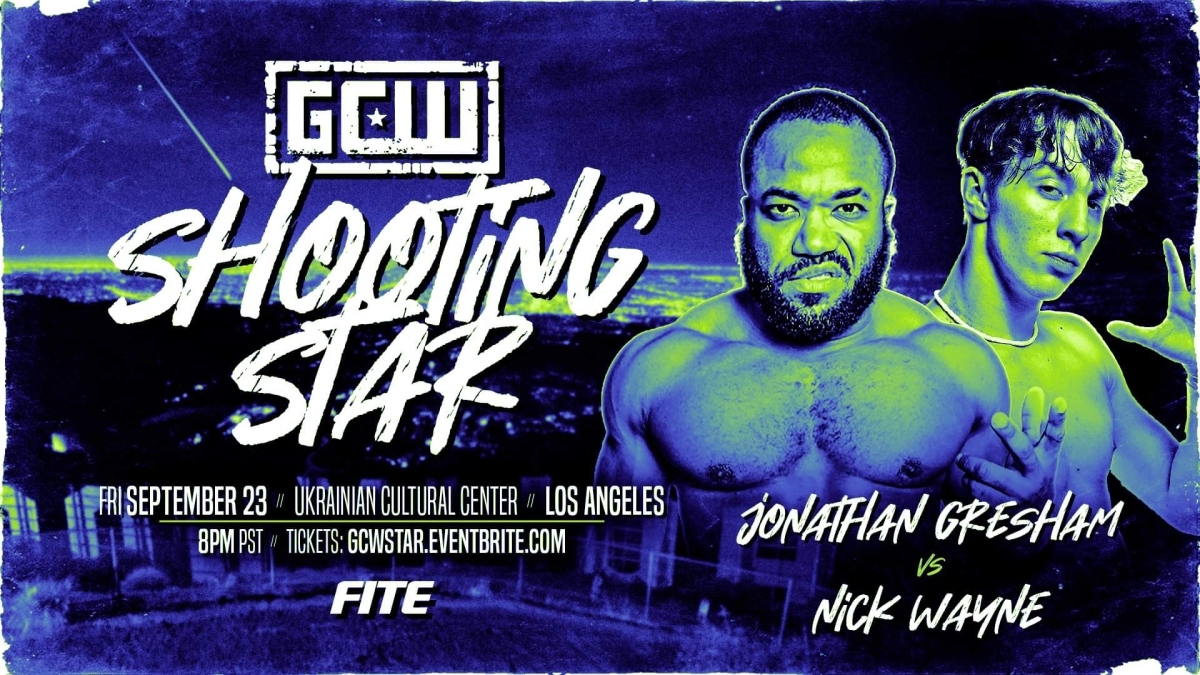 GCW Shooting Star also marks the Game Changer Wrestling return of “The Foundation” himself, Jonathan Gresham. This technically savvy grappler hasn’t been seen in the promotion since March, when he bested Blake Christian at the Astronaut event. More recently, however, he lost the ROH World Championship that he held for 224 days to Claudio Castagnoli at Death Before Dishonor this past July. While Gresham parted ways with All Elite Wrestling not long after, it didn’t take long for “The Octopus” to continue plying his craft. Case and point, at the Ric Flair’s Last Match show later that month, Gresham became the number one contender for the PROGRESS Wrestling World Championship when he won a four-way match.

As Gresham awaits his opportunity to wrestle for the PROGRESS World Championship, Gresham will be making his way to the LA area for Shooting Star. It’s here where he’ll take on promising young upstart Nick Wayne, one of the names involved in the aforementioned four-way encounter. Win or lose, Wayne’s performances have been indicative of his potential in professional wrestling. The fact that he has an All Elite Wrestling contract waiting for him has only strengthened his confidence early in his career. However, he can’t rest on this particular laurel if he intends to reach greater heights in his career. A victory over an accomplished grappler the likes of Gresham would be nothing short of advantageous to the young Wayne. 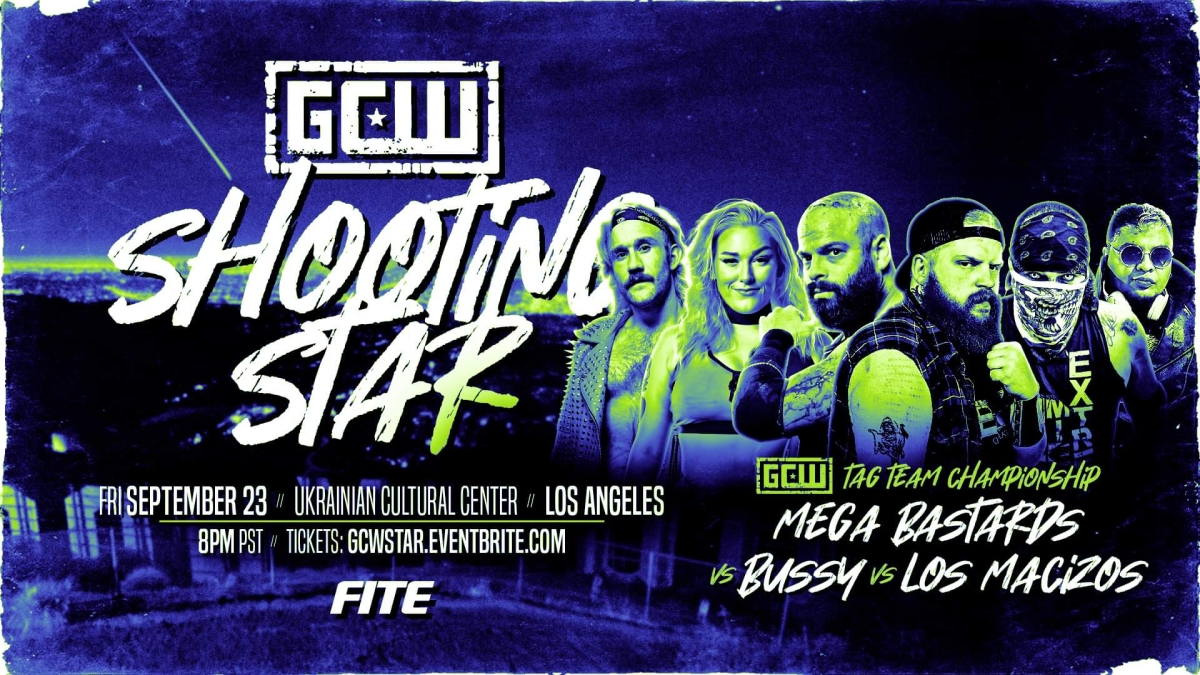 The Mega Bastards Defend Their Gold

Also scheduled for GCW Shooting Star is a tag team title defense. The GCW Tag Team Championship is currently held by the unlikely duo of Alex Colon and John Wayne Murdoch, collectively known as Mega Bastards. Despite being heated rivals for months, putting each other through pandemonium in and out of the ring, they have gelled when teaming as of late. This culminated at The Art of War earlier this month, when Colon and Murdoch emerged victorious in the War Games main event to capture the GCW tag team titles. Battered and bruised, Mega Bastards won gold for the first time as a duo. This Friday, they defend their newly won titles in a three-way encounter against two teams who claimed the GCW Tag Team Championship in the past.

Needless to say, this won’t be an easy outing for Colon and Murdoch, as they will have to square off with BUSSY, the duo of Allie Katch and EFFY, as well as Ciclope and Miedo Extremo of Los Macizos. While BUSSY is often regarded as a fun-loving tag team, they’ve proven themselves as capable wrestlers on multiple occasions, even using foreign objects if it means seizing victory. Meanwhile, Los Macizos are an international duo that captured gold in the United States and abroad. Mega Bastards’ first GCW Tag Team Championship defense won’t be without its proverbial bumps in the road, though it should make for a promising match all the same.

Stay tuned to the Last Word on Pro Wrestling for more on this and other stories from around the world of wrestling, as they develop. You can always count on LWOPW to be on top of the major news in the wrestling world, as well as to provide you with analysis, previews, videos, interviews, and editorials on the wrestling world. GCW Shooting Star is set to air Friday at 8 PM PST on FITE. Tickets are also available via Eventbrite.