On September 15, Gatoh Move Pro Wrestling celebrates its 10th anniversary with its event known as Phoenix Rises. There will be plenty to see and experience as Gatoh Move takes center stage at Shinjuku FACE, too. In the main event, Yuna Mizumori and Mei Suruga square off in a match pitting two long-time rivals against each other. In addition, the Asia Dream Tag Team Championship will be on the line. Miya, the newest Gatoh Move recruit, will also be in action as she battles the company’s founding member, Emi Sakura. All of this, and more, will take place at this 10th-anniversary event. Take a deeper dive into what to expect. 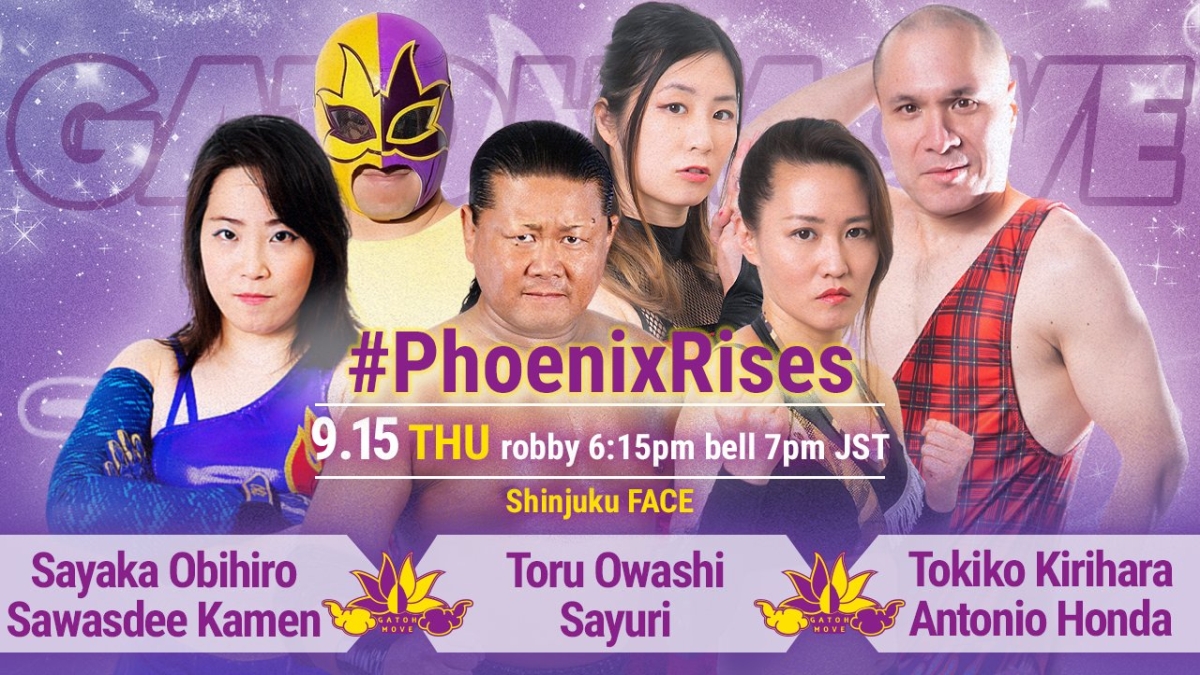 Sayaka Obihiro and Sawasdee Kamen vs. Tokiko Kirihara and Antonio Honda vs. Sayuri and Toru Owashi

In one of the preliminary matches of Phoenix Rises, three Gatoh Move duos will face off against one another. “The Blue Heart” Sayaka Obihiro and the masked Sawasdee Kamen will be in action against Shin Black Comaneci, the team of Tokiko Kirihara and Antonio Honda, as well as the duo of Sayuri and Toru Owashi. On paper, one would assume that Obihiro and Kamen have the advantage from an experience perspective. However, the wily ways of Kirihara and Honda have been well-documented and could very well lead them to victory. Furthermore, Sayuri and Owashi serve as something of the wildcard team in this match; it’s also worth noting that Sayuri’s original partner for this match, Shin Suzuki, had to be pulled from this show following a broken nose sustained on a recent episode of ChocoPro. Keep an eye on this match, especially as it sets the pace for the rest of the show to come. 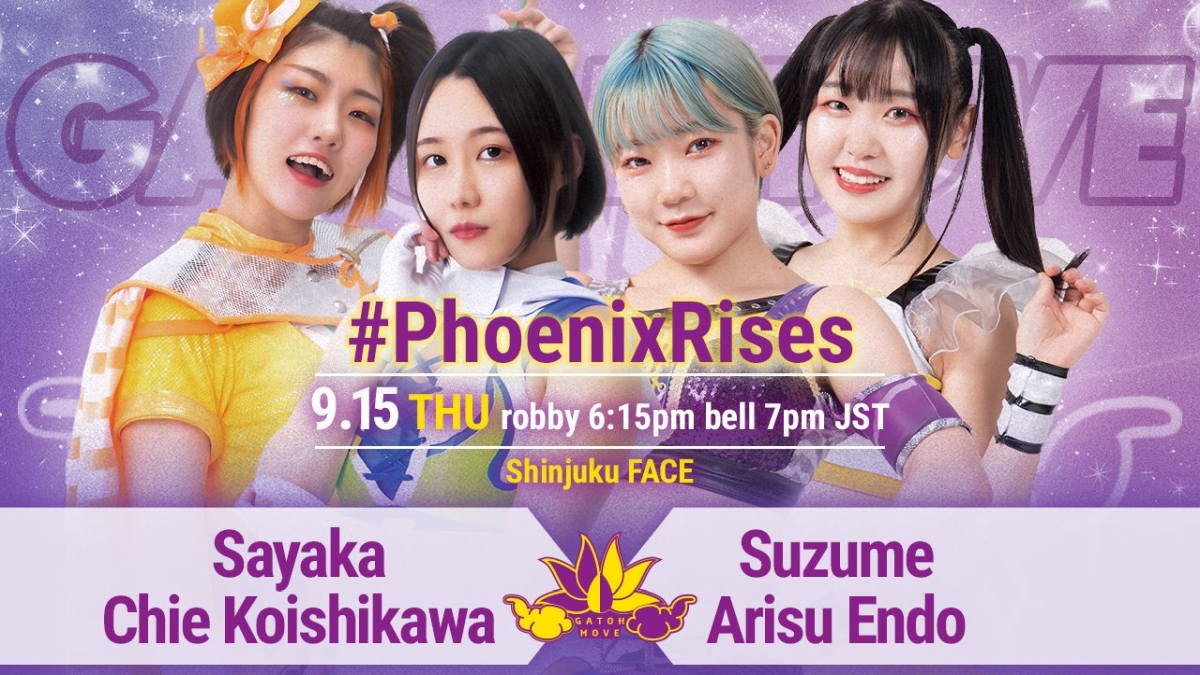 Sayaka and Chie Koishikawa vs. Suzume and Arisu Endo

This match can very well be described as Gatoh Move vs. Tokyo Joshi Pro-Wrestling in distilled form. While Sayaka and Chie Koishikawa represent the purple-and-yellow brand, Suzume and Arisu Endo enter this bout as TJPW representatives. Sayaka and Koishikawa are part of the fourth generation of their company and continue to sharpen their skill sets in not only Gatoh Move but other joshi puroresu promotions. Case and point, “Chiezo” recently appeared for one of STARDOM’s New Blood events, competing against Ruaka and Lady C. Collectively known as Daisy Monkey, Suzume and Endo have been testing their mettle against many of the joshi scene’s best, whether it’s been Suzume going into the Tokyo Princess Cup 2022 semifinals or Endo taking the fight to such names as Mei Suruga and Maki Itoh. Which team will emerge victorious at Gatoh Move’s Phoenix Rises event? 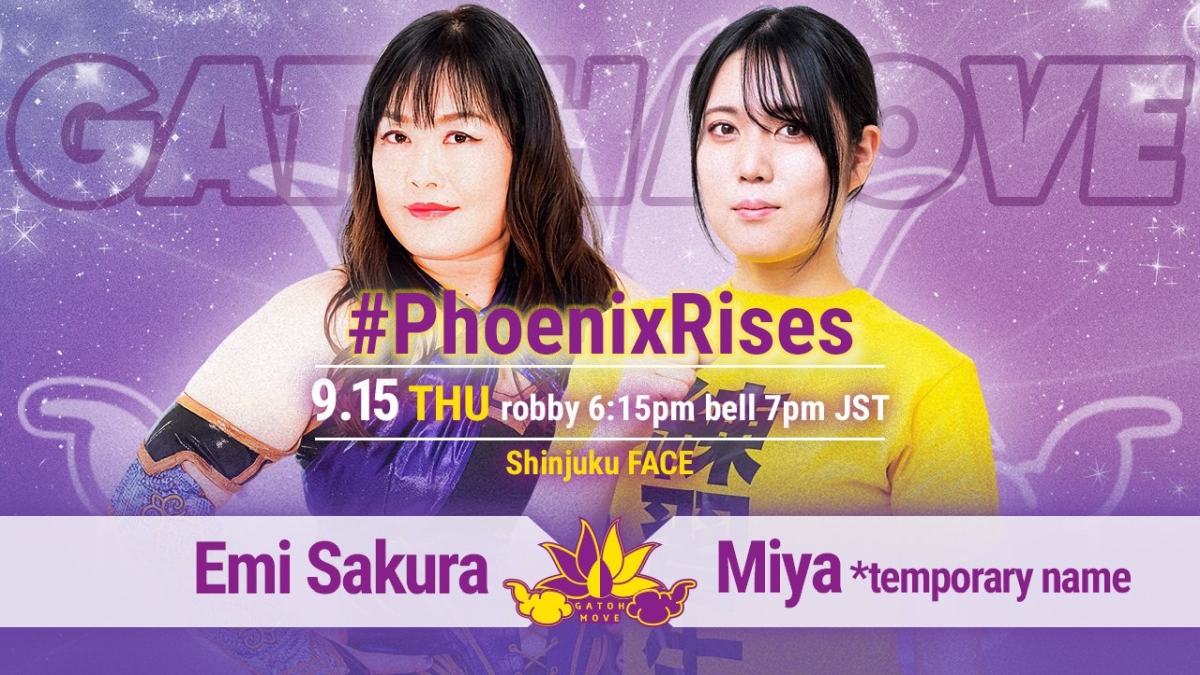 As the newest Gatoh Move trainee, Miya already has a few bouts under her belt, specifically against Chie Koishikawa and Mei Suruga. The former was her most recent bout and it showed incredible promise on the part of the recruit in question. Miya took the fight to the endlessly energetic “Chiezo,” though said energy was a factor that kept victory from her grasp. Nonetheless, Miya showed tremendous promise in this bout and the confidence and momentum from this could help her as Gatoh Move presents Phoenix Rises. On this show, she competes with the founder of Gatoh Move herself, Emi Sakura, who took a brief hiatus from her time in North America to celebrate her company’s anniversary. She will also have the opportunity to bestow a lesson upon Gatoh Move’s newest starlet in the making that won’t soon be forgotten. 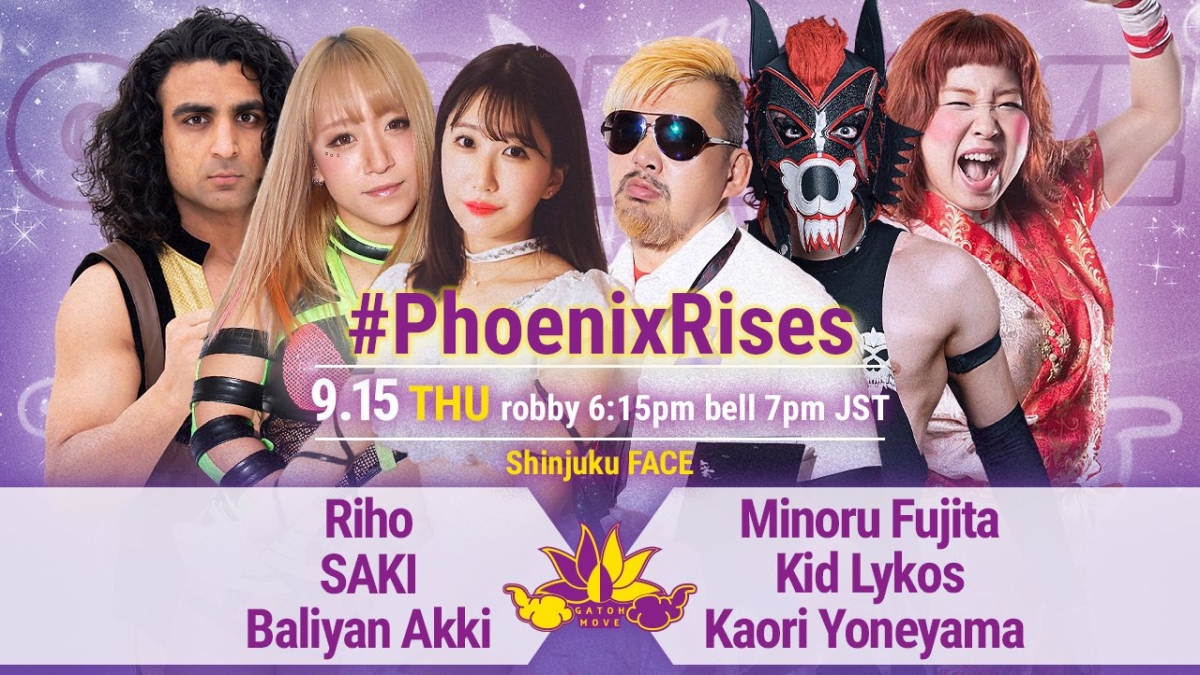 At Phoenix Rises, Riho and Super Asia Champion Baliyan Akki make their respective returns to Gatoh Move as they team with SAKI to take on the trio of Kid Lykos, Kaori Yoneyama, and former Super Asia Champion Minoru Fujita. Though contracted to All Elite Wrestling, Riho has spent the last few months in Japan, recently competing at TJPW’s Summer Sun Princess event. Meanwhile, Akki has been on a tour of North America, working matches for not only AEW but DEADLOCK Pro-Wrestling, Garden State Pro Wrestling, and elsewhere. They’ll be set to team with SAKI, who’s heading into this show as a dual tag team titleholder for Pro Wrestling WAVE and PURE-J. Meanwhile, Japanese wrestling veterans Fujita and Yoneyama will be working alongside Lykos, the masked high-flyer from the United Kingdom who’s held singles and tag team titles around the world. Expect this to be a competitive encounter. 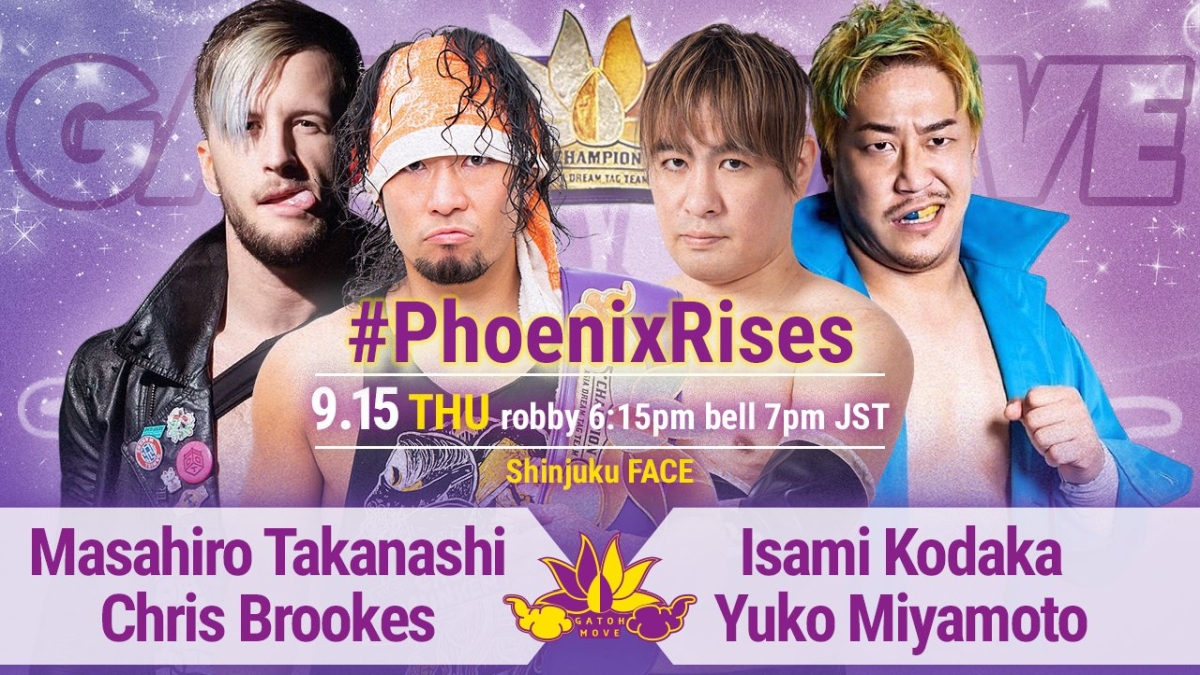 The sole title match to take place at Phoenix Rises sees the Asia Dream Tag Team Championship up for grabs. Calamari Drunken Kings, the duo of Masahiro Takanashi and Chris Brookes, defend the purple belts against hardcore wrestling veterans Isami Kodaka and Yuko Miyamoto. CDK captured the Asia Dream titles from Best Bros, the team of Mei Suruga and Baliyan Akki, this past February. Since then, Takanashi and Brookes defended the gold on four occasions, leaving with said gold each time. Though one may assume that the titles stay with the champions heading out of this show, it can’t be overlooked that Kodaka and Miyamoto boast veteran skill sets. As a duo, they captured tag team gold in promotions including Pro Wrestling WAVE, Big Japan Pro-Wrestling, and All Japan Pro Wrestling. Adding another tag team accolade to their resumes wouldn’t be terribly farfetched, making this match one to keep an eye on. 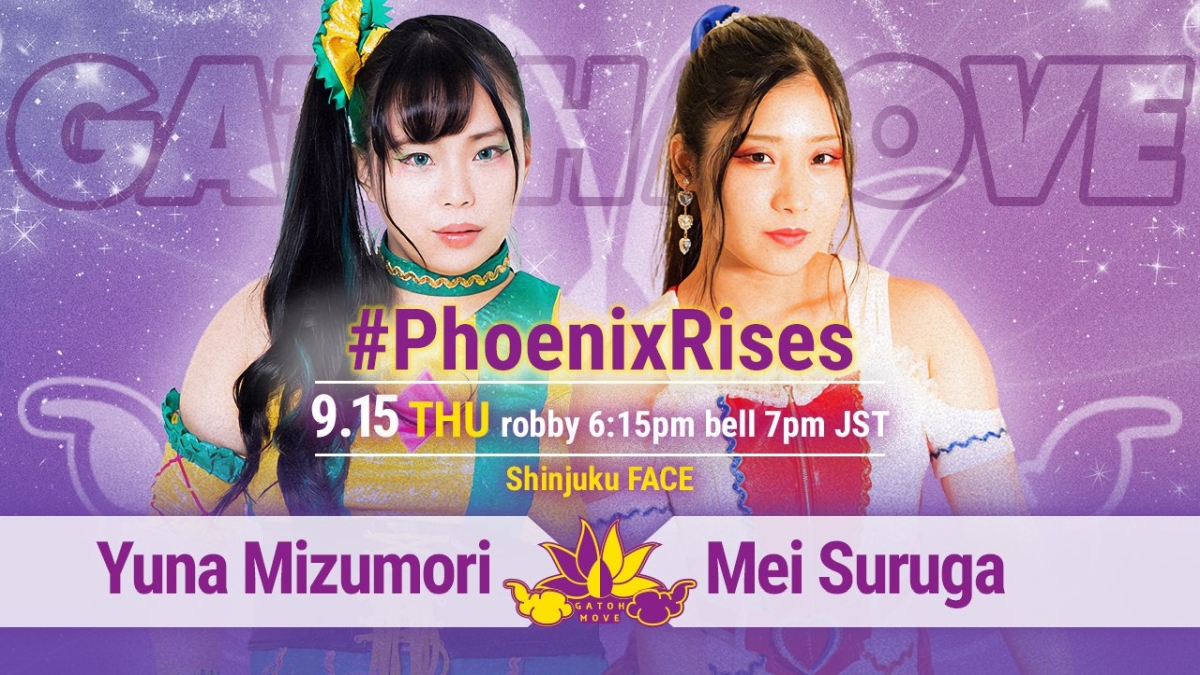 To cap off Phoenix Rises, two of the biggest names Gatoh Move has produced will do battle. Furthermore, this will be a match featuring two long-time rivals in “The Pineapple Girl” Yuna Mizumori and “The Big Apple” Mei Suruga. Whether it’s been for bragging rights or tag team gold, Mizumori and Suruga squared off on multiple occasions, not only as tag team competitors but singles wrestlers as well. Looking at analytics alone, one would be wise to place their bets on “Yunamon;” she holds 6 singles victories over “Mei-chan,” including one earned following a 30-minute Iron Man Match. Meanwhile, Suruga holds only 2 singles victories against Mizumori, one with Super Asia Championship contendership at stake. Given that this show has been touted as an anniversary event, there are perhaps no two better competitors to headline it. Will this match prove to be another notch in “Yunamon’s” belt, or can “The Apple Devil” end the night a winner?

Gatoh Move Presents Phoenix Rises will take place on September 15 live from Shinjuku FACE. It will then be made available to watch for free on the Gatoh Move YouTube channel. To support the company, you can sign up for their Patreon, which features multiple tiers, linked below.

Match Point: Bryan Danielson vs. Chris Jericho, AEW Dynamite (9/14/22)
Who Is the Longest Reigning NXT Women’s Champion of All Time?