As appropriate as it sounds, Game Changer Wrestling returns home to Atlantic City, New Jersey for GCW Homecoming 2022. This two-night event features both well-known wrestlers and up-and-coming names alike, all of whom will be competing at the historic Showboat venue. Last year’s Homecoming featured everything from major title changes to violence, the latter of which GCW has become synonymous with. This year’s show promises to be no different, and whether you’re attending in person or watching from home, a promising show awaits. Here’s what to expect heading into GCW Homecoming 2022 Part 1 this Saturday. 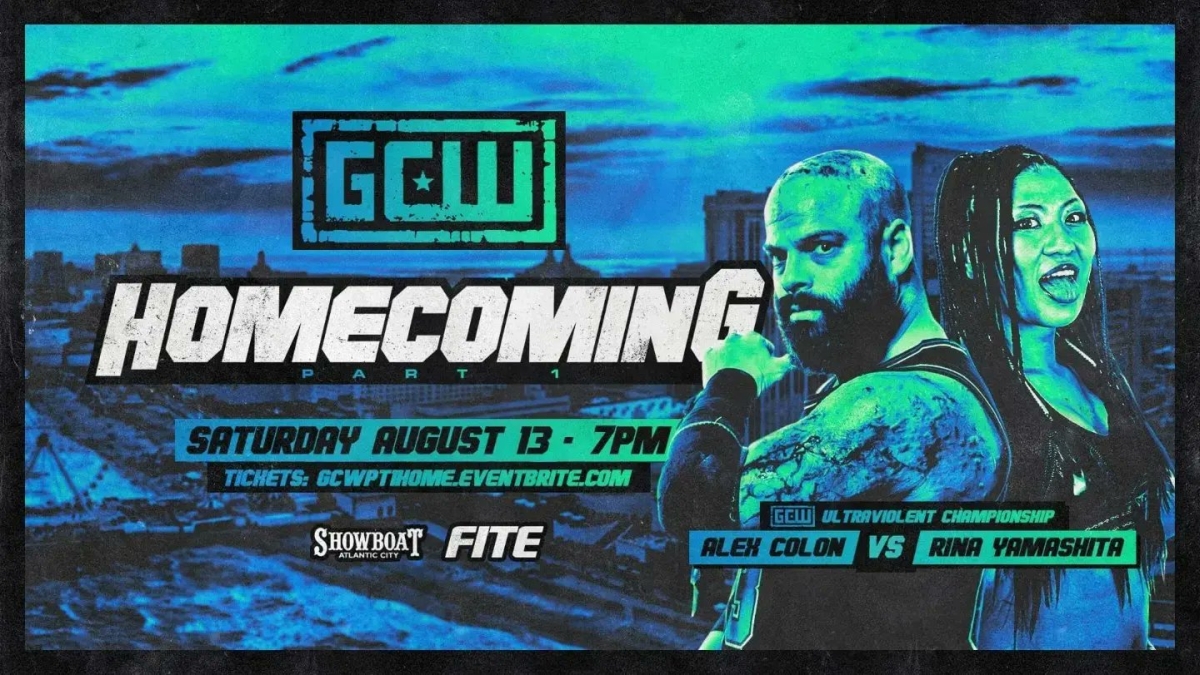 In one of the two title matches set for GCW Homecoming 2022 Part 1, Alex Colon defends the GCW Ultraviolent Championship against Rina Yamashita. As one of the grittiest fighters in Game Changer Wrestling, Colon’s representation speaks for itself. In addition to being a 3x Ultraviolent Champion, he has won numerous tournaments in the company, being a threepeat Tournament of Survival victor. To say that Colon embodies the ultraviolent style of wrestling would be an understatement and it’s a badge of honor that he wears proudly. The self-proclaimed “Best of the Best” heads into Homecoming Weekend to take on Yamashita, and while they’ve competed in tag team matches in the past, this marks their first-ever singles encounter.

Also known as “The Deathmatch Amazon,” Yamashita made her GCW debut this past November. In short order, she became one of the most popular international stars to step through the promotion. Earlier this year, she competed in the Tournament of Survival 7, making it to the semifinals where she was bested by Drew Parker. In her home country of Japan, Yamashita has held gold across numerous organizations including PURE-J, OZ Academy, and Pro Wrestling FREEDOMS, becoming one of the most highly sought-after stars in both Japan and abroad. This Saturday, she aims to add more gold to her resume when she challenges Colon for the GCW Ultraviolent Championship. Who will leave The Showboat with the title in their possession?

Plus:
COLON vs YAMASHITA
BRISCOES vs MACIZOS
WAYNE vs STARBOY
JWM vs TREMONT

EFFY Sets His Sights on the Gold

In the main event of GCW Homecoming 2022 Part 1, EFFY challenges the reigning GCW World Champion, Jon Moxley. Since capturing the gold in September, Moxley has kept a stranglehold on the GCW world title, defending it against a slew of different challengers. From Nick Gage to Tony Deppen to, most recently, Blake Christian, there has been no challenge that the All Elite Wrestling star has turned back. In fact, it can be argued that Moxley thrives the most in the environment of GCW, being able to use his trademark brawling style and penchant for violence to maximum effect. Heading into this Saturday’s show, one may assume that a successful Moxley defense is a given. However, one shouldn’t count out his challenger so quickly.

EFFY can best be described as one of the stalwart competitors in GCW. Whether it’s due to his popular tag team alongside Allie Katch, the two collectively known as BUSSY, or his various Big Gay Brunch events under the company banner, EFFY is nothing short of prevalent in GCW. With this prevalence comes an incredible degree of fan support, and one may say that if anyone were to dethrone Moxley for the title, it would be “The Weapon of Sass Destruction” himself. Despite their differing presentations, EFFY and Moxley are more alike than they seem on the surface. Anyone that has seen EFFY in a deathmatch-like environment will attest to this. Simply put, the challenger can match the champion from a violence perspective.

However, violence alone won’t guarantee a title change. As mentioned earlier, since winning the GCW World Championship, Moxley overcame every challenger placed in front of him. Thus, it will require considerable effort to take the title from him. Of all the wrestlers in GCW, EFFY may have the best chance of any to be the one to finally dethrone Moxley. The current champion is closing in on a full calendar year as GCW World Champion, provided he makes it through Homecoming Weekend. Tune into GCW Homecoming 2022 Part 1 to see if Moxley’s reign continues or EFFY seizes world title gold.

Stay tuned to the Last Word on Pro Wrestling for more on this and other stories from around the world of wrestling, as they develop. You can always count on LWOPW to be on top of the major news in the wrestling world, as well as to provide you with analysis, previews, videos, interviews, and editorials on the wrestling world. GCW Homecoming 2022 Part 1 is set to air Saturday at 7 PM EST on FITE. Tickets are also available via Eventbrite.