It is time to place your wagers on the betting odds for Ric Flair’s Last Match!

In many ways, wrestling is like any other sport. It offers action-packed sequences of athletic triumphs, features loud, animated crowds who like to boo/cheer as appropriate, and has rosters of star players whose names and likenesses people proudly wear as they walk around town. Wrestling is a lot like any other sport, which is why it makes all the sense in the world that not only can you bet on the outcomes but that you can bet on other things such as who will hit their finisher first.

Sports betting in wrestling isn’t necessarily new or even unique anymore, but prop betting is. And for those who don’t know what prop betting is, it is essentially the ability to bet on elements of a game or match outside of that event’s outcome. For example, when it comes to the NFL’s Super Bowl, prop bets range from who will win the coin toss to how long the National Anthem will be to what color Gatorade will be poured on the winning coach. There are also in-game props that include who will have the first touchdown, which team will be leading at the half, who will win the MVP, how many sacks a certain player may have, and the list goes on. In all, the Super Bowl can feature upwards of 100 prop bets, which offers quite the excitement for bettors.

Over the last year or so, websites such as DraftKings and FanDuel have started to get in on the prop bet action as it relates to wrestling, offering special free-to-play pools on full cards and special attraction matches. Most recently, DraftKings offered a special pool for Forbidden Door with opportunities to wager on the full match card as well as prop bets for the main event that included wagers for how many paradigm shifts would be hit, how many tables would break, if there would be interference, etc.

Now, BetOnline is also getting in on the action as they have offered a series of betting odds for Ric Flair’s Last Match. 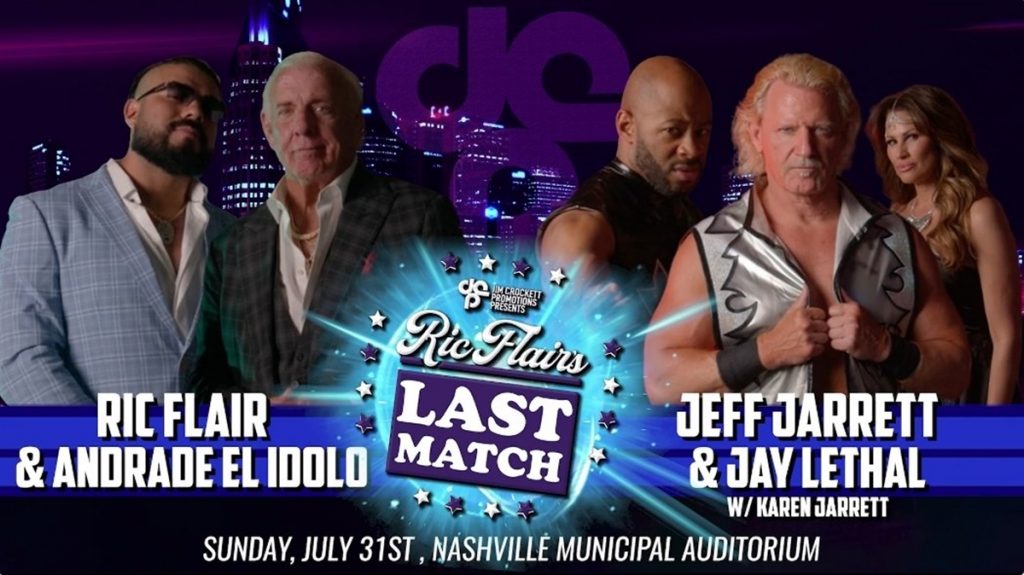 After months of speculation that saw an entire show card be built around an unknown main event, the details for Ric Flair‘s final match and opponent were finally announced last week. Flair will be teaming up with his son-in-law Andrade El Idolo to take on longtime adversaries, Jeff Jarrett and Jay Lethal as he laces up the boots for one last time. In advance of the match, Flair and Jarrett filmed a segment where Jarrett attacked Flair, bloodying him up. Not that any additional interest needed to be drawn, however, as Ric Flair’s Last Match sold out almost as soon as it was announced and the ensuing card made the show an expected high PPV buy, even before Flair’s own opponent was revealed.

But now that Flair’s opponent and the details of his final match are out there, sportsbooks are getting in on the action with a series of prop bets you can wager on. We’ll break down the betting odds for Ric Flair’s last match, one-by-one.

For those who may not know anything about odds, here is a crash course. When odds are listed as fractions, the first number indicates the amount of money you win and the second number indicates what you would need to wager in order to make that money. So, in the above example, you would need to wager $20 on Flair and El Idolo in order to make $1 in profit. So basically, a $20 wager nets you $21. Conversely, if you wagered on the underdogs of Jarrett and Lethal, you would wager $1 to profit an additional $7. For Flair and El Idolo, that is what those in sports betting would consider a sure thing.

While wrestlers have a history of retiring on their backs (aka losing the match), no one seems to have any doubts in their minds about how this one will go. That’s why the odds are so staggering in favor of Flair and his son-in-law. The odds favor those two so much, that it’s barely worth betting on. But should you want to, there is a clear favorite. It would be absolutely shocking to see Flair and El Idolo lose as Flair seems primed to give his son-in-law a huge rub with the victory here, while also going out with a hero’s goodbye for himself after such a long and decorated career.

Here’s a fun one. In the pre-match parking lot attack of Flair by Jarrett and Lethal, the bad guys used closed fists, sunglasses, a microphone, and a less than hidden blade job, to bloody Flair so bad that his face was covered in a crimson mask and his white dress shirt was stained red. Following the beatdown, the two older statesmen of the match have exchanged shoot promos on the other, using various podcasts and interviews to do so. Credit to both guys, they’ve sold this match excellently.

But when it comes to who will bleed first, it is Jarrett, not Flair, that tops the odds. It makes sense as Flair took the first shot. During the match, which is a showcase FOR him, it is only natural that Flair will get his modicum of revenge by causing Jarrett to bleed as well. And while both El Idolo and Lethal could end up with a crimson-stained face of their own before all is said and done, it is unlikely either of those guys will be first to do so. Blading, while still something that is used in wrestling today, is certainly something that guys of Jarrett and Flair’s ilk are more accustomed to. There is an art to it, one that some younger wrestlers may not be as experienced in. So when it comes to who will bleed aka blade first, going with Jarrett seems like a safe, yet minimally profitable wager.

It is time to wheel-and-deal, and style-and-profile with the dirtiest player in the game. Ric Flair’s final match is going to be all about him. Sure, Lethal and El Idolo will probably do the heavy-lifting, but expect Flair to go through all his greatest hits. That means leg drops, body slams, elbow drops, figure fours, and more. Assuming that is, that Flair can still do some of these moves. He is 73 years old after all.

When looking at the list above, there are two moves that stand out as ones that are easier than others for a septuagenarian to pull off. One is the figure four. The figure four is a submission move and not one that is likely to start a match. It is no doubt a move that will be seen over the course of this final bout, perhaps even to cause Jarrett to eventually tap out, but it’s not one that will be seen early on. That leaves another Flair classic, the Woo chops, as the unsurprising favorite. Flair may start the match or he may take a hot tag, but one thing is certain when he comes in, he’ll be ready to have the crowd reacting with every blow to the chest.

A closer look at the robe Ric Flair will wear for his final match #RicFlair #Starrcast pic.twitter.com/FIoHwvbgp8

Perhaps BetOnline hasn’t been paying close enough attention, but this prop seems like an odd one to include given Flair revealed the color of his last match robe before his last match opponent was even revealed. Having spent his entire career entering the ring in extravagant robes of every color listed above and then some, clothing has always been a huge part of Flair’s entrance and gimmick. As the familiar refrain of “Dawn,” taken from Richard Strauss’ “Also Sprach Zarathustra” plays him in, Flair has revealed that he will be coming out in a white robe with purple lettering and trimming. It is primarily white, so here’s a chance to attempt to make a quick few bucks on a moderately priced wager of +600 (6/1).

That is of course if Flair doesn’t swerve us, pick green, and bet a bunch of money on himself. That’s probably against the rules, but hey, this is pro wrestling we are talking about. There is no such thing, as a sure thing.

Will a Guitar be broken in the match?

While 99 percent of this match will be about Flair’s final bow, he isn’t going to be in the ring by himself. He does have a teammate and opponents so it’s not surprising to see a prop bet revolving around one of wrestling’s most famous props from years past, Jeff Jarrett’s guitar.

When Jarrett was still in the midst of his regular wrestling career, ‘J-E-Double F, J-A-Double R, E, Double T’ was known for a few things, one of them was talking about how great he was and another was his country boy gimmick that saw him bring a guitar to the ring. Whether it was in WWE, TNA, or any number of other promotions, Jarrett’s guitar helped him win a lot of matches and adversely led to him losing a lot of matches as sometimes his opponent smashed the guitar on him instead of Jarrett smashing it on his opponent. To that effect, it is kind of surprising to see “No” as the favored option here. Because let’s be honest, this match is going to be overbooked to death when Flair and Jarrett are the primary wrestlers, if only to hide the weaknesses of their ages. The idea that a guitar, along with other props might not factor into the outcome, seems odd.

Of all the odds listed above, this one is probably the toughest to handicap though, because of its specificity. It is worded as such that Jarrett could still bring the guitar to the ring, swing it around, attempt to smash it, and ultimately fail, thus earning bettors of the “No” wager their cash. The odds are still pretty close though, so it seems this one could be a toss-up either way.

Stay tuned to the Last Word on Pro Wrestling for more on Ric Flair’s Last Match betting odds and other stories from around the world of wrestling, as they develop. You can always count on LWOPW to be on top of the major news in the wrestling world. As well as to provide you with analysis, previews, videos, interviews, and editorials on the wrestling world. You can watch Ric Flair’s Last Match via FITE.TV.

Opinion: AEW Is In Need of More Delegation
Preview: AEW Dynamite (7/27/22) – Fight For The Fallen