This Friday, Game Changer Wrestling returns to the West Coast – Los Angeles, California, to be exact – for GCW No Signal in the Hills Pt. 2. The inaugural event took place in August of last year, featuring such bouts as BUSSY challenging Second Gear Crew in a brutal GCW Tag Team Championship match and Dark Sheik and Nick Gage taking one another to the limit in the main event. This year’s event looks to be just as promising, featuring high-flyers including Gringo Loco and Komander, not to mention more grounded wrestlers such as Tony Deppen, along with many others. Before the action airs lives from the Ukrainian Cultural Center and on FITE, here’s what to know.

GCW No Signal in the Hills Pt. 2 – Full Card 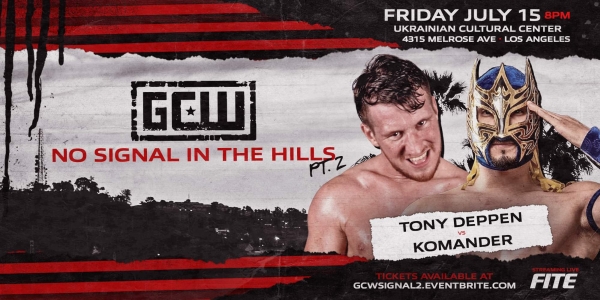 To say that Komander has made a splash in Game Changer Wrestling would be an understatement. Hailing from Reynosa in Tamaulipas, Mexico, this masked high-flyer boasts roughly a decade of wrestling experience. He wrestled primarily in his home country for such organizations as Promociones MDA, Revelacion Lucha Libre Iztapalapa, and Lucha Libre AAA Worldwide, building a name for himself in the process. However, it was earlier this year when he took his talents stateside, appearing for GCW at the company’s You Wouldn’t Understatement event this past month in a Scramble Match. The following day, at I Never Liked You, Komander was involved in a six-man lucha-style tag team match. While the young luchador came up short in both matches, he wowed viewers with his fast-paced offense and propensity to take to the skies.

Komander’s work in GCW isn’t done yet, however, as he’s scheduled to compete at GCW No Signal in the Hills Pt. 2. Furthermore, this will be his first singles match in the promotion, and against a talent the caliber of Tony Deppen, Komander will have to be at the top of his game. Deppen is another name who’s been prevalent throughout the promotion, even challenging Jon Moxley for the GCW World Championship on the same show Komander made his company debut. Despite coming up short against the All Elite Wrestling star, Deppen performed valiantly, taking the fight to the multi-time world champion across several companies. In fact, the experience gained in this match may grant Deppen the upper hand as he goes into battle against this new competitor on Friday.

Due to Injury, @TheRealMorrison is unable to compete.

At GCW No Signal in the Hills Pt. 2, Rocky Romero of New Japan Pro-Wrestling fame makes his Game Changer Wrestling return. Initially, Johnny Game Changer was set to take on Loco, though the former had to be pulled due to injury. It’s important to note that this will mark Romero’s first GCW appearance of the year. The former 8x IWGP Junior Heavyweight Tag Team Champion last appeared at Josh Barnett’s Bloodsport 6 in April 2021, facing Chavo Guerrero Jr. in a losing effort. Needless to say, Romero will be aiming to make his GCW return a successful one.

Hailing from Chicago, Illinois, “The Base God” Gringo Loco possesses not only two decades plus of in-ring knowledge but an array of aerial maneuvers. Though he may appear bigger than your average high-flying luchador, his ability to pull off such techniques as his 450 Splash can’t be overlooked. He’s also seen modest success in GCW as of late, emerging victorious in his previous tag team encounters. With that said, it’s not often that he’s able to showcase his singles work in GCW, which is where this upcoming bout against Rocky Romero comes into play. On paper, their styles seem to gel well, but it’s this Friday that they’ve had the opportunity to square off. See who comes out victorious at GCW No Signal in the Hills Pt. 2.

Stay tuned to the Last Word on Pro Wrestling for more on this and other stories from around the world of wrestling, as they develop. You can always count on LWOPW to be on top of the major news in the wrestling world, as well as to provide you with analysis, previews, videos, interviews, and editorials on the wrestling world. GCW No Signal in the Hills Pt. 2 is set to air Friday at 8 PM PDT on FITE. Tickets are also available via Eventbrite.