Game Changer Wrestling is set to return to the Los Angeles area for GCW Maniac. Live from the Ukrainian Cultural Center, which has become one of the company’s trademark venues on the West Coast, viewers will see plenty of action from the independent wrestling powerhouse. In addition to the GCW returns of Drew Parker and Indie Wrestling Hall of Fame inductee LuFisto, Joey Janela, Second Gear Crew, and many more will be in action. Furthermore, if you’re unable to attend the show in person, the action will unfold live on FITE. Without any further delay, take a look at what’s in store. 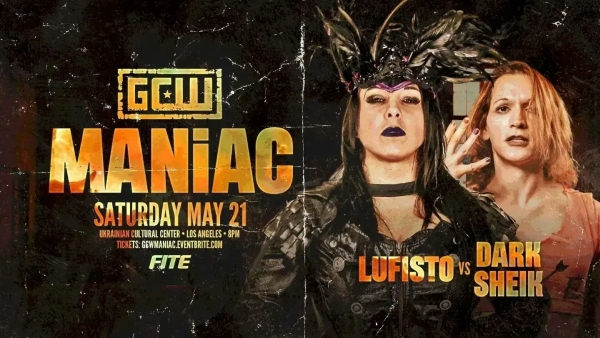 A Hall of Fame Worthy Encounter

One of the first matches announced for GCW Maniac will pit LuFisto, an Indie Wrestling Hall of Fame inductee as mentioned earlier, against “The High Priestess” herself, Dark Sheik. This match marks LuFisto’s first one-on-one encounter in GCW; she made her debut for the promotion this past January at The WRLD on GCW. LuFisto was a surprise entrant in the kickoff show’s battle royal, and despite a valiant effort, she was unable to get the win in New York City. She would go on to appear at last month’s Joey Janela’s Spring Break 6 Part 2 in the Clusterf*ck Battle Royal. Finally, the women’s indie wrestling veteran will wrestle a singles match under the GCW banner and against an opponent the caliber of Sheik, no less.

It’s important to note that this will be LuFisto and Sheik’s first singles match against each other, which is surprising given how long they’ve been in wrestling. While LuFisto’s career kicked off in the mid-1990s, Sheik started wrestling during the early 2000s. In terms of a home-field advantage, heading into GCW Maniac, one must give the nod to Sheik. She’s been nothing short of a Game Changer Wrestling stalwart, even working for the company’s sister promotion, LA Fights; in the latter promotion, she picked up wins over names such as Kevin Blackwood and Peter Avalon this year. A victory over LuFisto would be huge for Sheik, but if it works in the latter’s favor, expect the victory to be well earned. 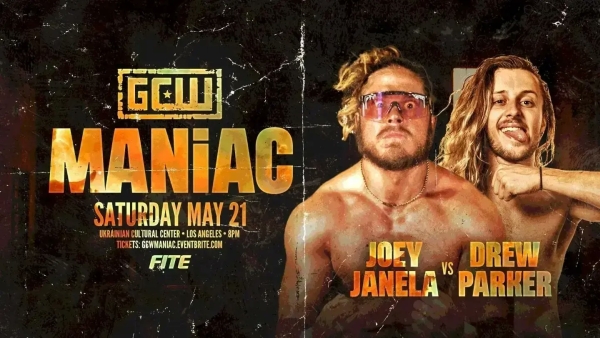 LuFisto won’t be the only wrestler making their Game Changer Wrestling return at GCW Maniac; “The Urchin Prince” Drew Parker will also be in action, wrestling his first GCW match since this past July, taking on “The Bad Boy” Joey Janela. For the uninitiated, Parker previously wrestled across both nights of Homecoming Weekend 2021. He went into Night 1 as BJW Deathmatch Heavyweight Champion, defeating Alex Colon for GCW Ultraviolent Championship, before going onto Night 2 to best Jimmy Lloyd as a double champion. In fact, Parker will step into the Ukrainian Cultural Center as a 2x BJW Deathmatch Heavyweight Championship, having won the title a second time this past May. Simply put, he’ll be a sizable challenge for “The Bad Boy.”

This isn’t to say that this is the first time Parker and Janela have shared a ring, however. They’ve worked against each other in the United Kingdom, Parker’s home turf, working against each other at HOPE Wrestling and Pro Wrestling Chaos. In both encounters, Parker had his arm raised. Time has changed “The Bad Boy,” however, making him a hungrier, more dangerous, and even more nefarious wrestler. Since infamously turning his back on supposed ally X-Pac earlier this year, Janela has done little to endear himself to the GCW faithful. Given his most recent victory against Masha Slamovich at Life Goes On, however, one can’t argue with results. Can Janela pick up another victory, this time at the expense of Parker, at GCW Maniac? 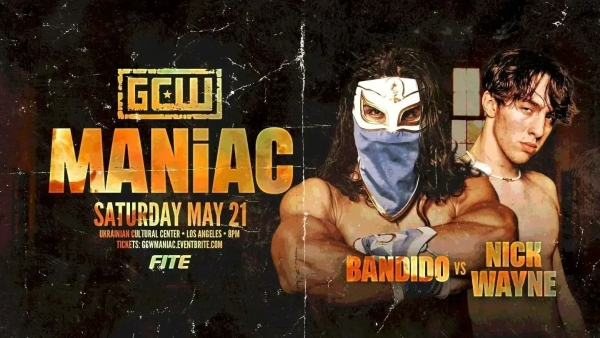 In what may be the most unique match set for GCW Maniac, Bandido will clash with Nick Wayne. To say that Bandido has encountered recent trials and tribulations would be an understatement. This past April, he failed in his efforts to unseat Jonathan Gresham for the ROH World Championship at Supercard of Honor. More recently, at Pro Wrestling Guerrilla’s Delivering the Goods event, Bandido lost the PWG World Championship to Daniel Garcia, who won this year’s Battle of Los Angeles tournament. Despite being a world-class wrestler, not to mention a world championship elite level contender, Bandido struggled to pick up recent major victories. Can he rebound this Saturday against a young man that many are touting as a prodigy?

With an All Elite Wrestling contract in his possession, albeit one that he can’t cash in on yet due to his age, Wayne is right to feel as confident as he likely does. This third-generation wrestler has been more than busy on the independent scene, not only in GCW but other promotions including DEFY Wrestling and Violence X Suffering. Most recently, he was involved at GCW’s Life Goes On event, teaming with Jordan Oliver in a losing effort against The S.A.T. One shouldn’t overlook his success throughout 2022, however, as victories over Jimmy Lloyd, Alex Zayne, 2 Cold Scorpio, and others speak to Wayne’s potential. Needless to say, a victory over Bandido would take him to a higher level. Don’t miss this first-time encounter at GCW Maniac.

GCW Maniac will take place in Los Angeles, California on May 21, 2022.

Stay tuned to the Last Word on Pro Wrestling for more on this and other stories from around the world of wrestling, as they develop. You can always count on LWOPW to be on top of the major news in the wrestling world, as well as to provide you with analysis, previews, videos, interviews, and editorials on the wrestling world. GCW Maniac is set to air Saturday at 8 PM PDT on FITE. Tickets are also available via Eventbrite.