All wrestlers have to start somewhere on the path to making their dreams a reality, whether it be a wrestling school, church basement, bingo hall, etc. From there, those wrestlers work their way up to the pinnacle of their dreams. For many, that’s a career in WWE or more recently AEW, IMPACT Wrestling or even NJPW. But sometimes the journey is just as important as the destination. In this edition, we focus on former 2x WWE Champion, “The Scottish Warrior,” Drew McIntyre.

To call Drew McIntyre one of the featured WWE Superstars of the modern era would be an understatement. In addition to being a 2x WWE Champion, he’s picked up wins over some of the biggest names in the company, Randy Orton and Brock Lesnar included. However, his path to the top wasn’t without its swerves and detours, which makes his story all the more intriguing. Simply put, the man originally dubbed “The Chosen One” realized his destiny on a delay. To better understand this individual’s story, one must turn the clock back all the way to 2001.

Born Andrew McLean Galloway IV, the future Drew McIntyre began training at the United Kingdom-based Frontier Wrestling Alliance. It was here where he learned under a number of esteemed English professional wrestlers, Doug Williams included. Galloway started training at the age of 15, and as he trained, he attended Glasglow Caledonian University, eventually earning a Master’s Degree in criminology. While Galloway became a well-educated individual, able to use his degree to pursue a more traditional career path, he loved wrestling too much to let this particular dream slip.

Following his professional wrestling training, Galloway wrestled across the UK independent scene, eventually adopting the ring name of Drew Galloway. British Championship Wrestling, Irish Whip Wrestling, and International Pro Wrestling: United Kingdom were just a few organizations where Galloway plied his craft. He saw considerable success on the independent level as well, becoming a 2x BCW Heavyweight Champion to name one example. In fact, Galloway only spent a few years wrestling independently before he eventually signed with WWE in 2007.

After inking a deal with WWE, Galloway, who eventually became Drew McIntyre, reported to Ohio Valley Wrestling; this served as a developmental territory for WWE at the time. Simultaneously, in the beginning, McIntyre was on the road with the company, working matches on Monday Night Raw and Friday Night SmackDown. Following OVW and WWE’s parting of ways, McIntyre began reporting to the company’s new developmental platform, Florida Championship Wrestling, in 2008. It was here where he saw his early success under the WWE umbrella.

As an FCW competitor, McIntyre captured gold on 3 occasions. He became a 2x FCW Florida Tag Team alongside Stu Sanders, the latter of whom NXT 2.0 viewers may know better as Wade Barrett. Furthermore, McIntyre captured the FCW Florida Heavyweight Championship, holding the title for 84 days. The future “Scottish Warrior” worked with names such as Joe Hennig, who went on to become Curtis Axel, and Sheamus, who McIntyre feuded with not only in developmental but on the main roster years down the road. McIntyre wasn’t long for WWE developmental, however, as he would make his main roster re-debut in the summer of 2009.

Drew McIntyre: The Chosen One of WWE

Drew McIntyre returned to SmackDown in a major way, not only exercising his authority against other WWE Superstars but receiving the on-screen blessing of Vince McMahon, who believed the newcomer to be a future world titleholder. Later that year, McIntyre bested John Morrison at the TLC pay-per-view for the Intercontinental Championship, winning his first main roster title in the process. While a major moment, “The Chosen One” only defended the title a handful of times before dropping it to Kofi Kingston the following year at Over the Limit.

From there, McIntyre’s prominence on WWE television dipped. While he enjoyed a brief WWE Tag Team Championship run with Cody Rhodes, few angles McIntyre was part of seemed to stick. Whether it was attempting to woo Kelly Kelly or competing in more comedic matches with the likes of Santino Marella and Hornswoggle, his stock dropped. In 2012, matters appeared to pick up when McIntyre joined Jinder Mahal and Heath Slater, forming the Three Man Band. While a charismatic trio, doing the most with the material they had, 3MB only had so high of a ceiling, losing most of their matches. By 2014, as the man originally billed “The Chosen One,” McIntyre was released from his WWE contract.

Drew Galloway Returns to the Independents

Not long after his WWE release, the once “Chosen One” chose his own destiny by reentering independent wrestling. This was where he reinvented himself, readopting the name Drew Galloway and displaying a newfound sense of grit. This was an entirely different performer from what WWE fans were familiar with. He grew out a beard and put on considerable muscle, looking more imposing than ever. Simply put, if any company desired to put their world championship on him, it wouldn’t seem out of place. Needless to say, this was a far cry from the man who once comically played air guitar in the ring.

Galloway tore through the independents, winning world titles in such companies as Insane Championship Wrestling and EVOLVE Wrestling. He didn’t limit himself on a geographic level, either, working in Australia, his home country of Scotland, and elsewhere. With how popular he became on the indies, it was almost like the final years of his WWE career never took place, his stock steadily rising. Galloway also enjoyed a brief stint in Total Nonstop Action Wrestling, later to be known as IMPACT Wrestling. Despite only working in TNA from January 2015 to February 2017, Galloway amassed several accomplishments, including the IMPACT Grand Championship and TNA World Heavyweight Championship. With how much Galloway’s stock rose, and at such a steady pace to boot, viewers shouldn’t have been surprised when he returned to the same company that released him years prior. 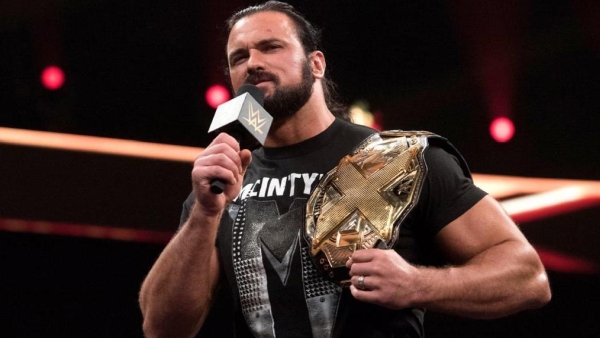 A New Opportunity in WWE

In April of 2017, Drew Galloway re-signed with WWE, first appearing in the front row at NXT TakeOver: Orlando. As Drew McIntyre once more, he found success on the black-and-gold brand in short order. Case and point, the following August at NXT TakeOver: Brooklyn III, McIntyre captured the NXT Championship. McIntyre would hold the title until November when he dropped it to Andrade “Cien” Almas at NXT TakeOver: WarGames. However, this match did not end the way that he, or anyone else, expected, as he suffered a torn bicep. This kept him out of action for months, but he was ready to return in a major way.

McIntyre returned to action in April of 2018, though not on NXT. He returned on Monday Night Raw, quickly aligning himself with Dolph Ziggler. Together, the two captured the Raw Tag Team Championship. During this time, “The Scottish Psychopath” played the role of enforcer. Whether it was alongside Ziggler, Baron Corbin, or Shane McMahon, the spotlight wasn’t on McIntyre. Rather, he was more of a supporting character. However, starting in 2020, McIntyre would not only ascend as a singles star but become one of the company’s most valuable players during an uncertain time in human history.

In January of 2020, Drew McIntyre entered the Royal Rumble match. He performed incredibly during this match, even eliminating WWE Champion Brock Lesnar, who had been nigh unstoppable in the bout by that point. McIntyre secured 6 eliminations in total, last eliminating Roman Reigns to win the entire match. McIntyre would go on to challenge Lesnar for the WWE Championship, but before long, the professional wrestling world was shaken following the COVID-19 pandemic. This resulted in many companies, WWE included, restructuring how they presented content. Nonetheless, WWE persisted, eventually making it to WrestleMania 36.

On Night 2 of WrestleMania 36, McIntyre challenged Brock Lesnar for the WWE Championship. This was a dominant showing for “The Scottish Warrior,” who defeated “The Beast” in under 5 minutes to capture the title. With this victory, he became the first British star to win a WWE world title. McIntyre would become a 2x WWE Champion between March 2020 and February 2021, and though his reign took place in venues without paying fans, he performed admirably and carried himself as a champion all the same. From Seth Rollins to AJ Styles to Randy Orton, McIntyre defended his title against many prominent names. By and large, his time as WWE Champion was solid, though the lack of crowds left this period with a proverbial asterisk beside it. However, considering his position in the company, a third world title reign in WWE isn’t out of the realm of possibility.

Following his second WWE Championship loss, Drew McIntyre took part in various programs, all the while remaining a popular fixture in the company. From feuding with former 3MB teammate Jinder Mahal to challenging Big E for the WWE Championship, McIntyre has always been involved in one angle or another. However, as mentioned earlier, a third WWE world title reign may be in his future. This is especially true given, as of this writing, his current feud with WWE’s undisputed world titleholder, Roman Reigns, and the rest of The Bloodline. Can this be the catalyst for the aforementioned third world title victory for McIntyre? Either way, “The Scottish Warrior’s” journey remains nothing short of inspirational.