Returning to Valor Hall in Oak Grove, Kentucky, the National Wrestling Alliance is set to present NWA PowerrrTrip 2. The previous PowerrrTrip took place this past February and it featured several notable moments, including Matt Cardona winning the NWA Worlds Heavyweight Championship in the main event. One must wonder how the NWA will follow up during this upcoming sequel event of sorts. As was the case with the original, PowerrrTrip 2 is a joint production between the NWA and Tried-N-True Pro Wrestling, the latter owned and founded by former NWA National Heavyweight Champion Anthony Mayweather. Here’s what to know about this weekend’s action. 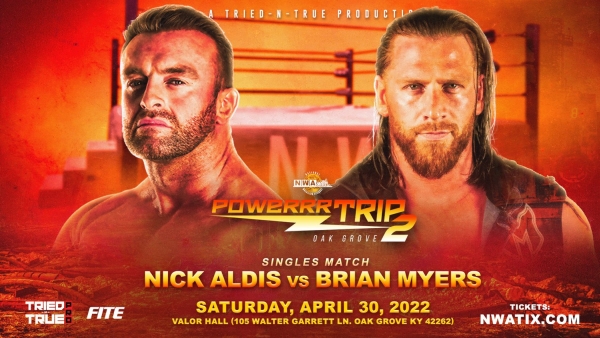 At NWA PowerrrTrip 2, “The Most Professional Wrestler” and one-half of The Major Players, Brian Myers, makes his National Wrestling Alliance debut. Though he’s been enjoying prominence in IMPACT Wrestling as of late, his work on the independent scene can’t be denied. Case and point, at Game Changer Wrestling’s Welcome to Heartbreak event this past February, he teamed with fellow Major Player and current NWA Worlds Heavyweight Champion Matt Cardona in a losing effort against Joey Janela and X-Pac. As a veteran with nearly two decades of experience under his belt, Myers is an accomplished tag team wrestler, having won gold in IMPACT, WWE, and elsewhere. This Saturday, however, he’ll have to be at the top of his game if he intends to make his NWA debut a win.

Squaring off against Myers will be “The National Treasure” himself, Nick Aldis. To say that Aldis is synonymous with modern-day NWA would be an understatement, having held the company’s world title for over 1,300 days across 2 reigns. This isn’t to say that Aldis’s work is limited to his home promotion, however. For example, at IMPACT’s Multiverse of Matches event earlier this month, he picked up a victory alongside real-life wife Mickie James against Cardona and his real-life wife, Chelsea Green. It is only fitting, then, that Aldis would clash with Cardona’s tag team partner and close friend at NWA PowerrrTrip 2. Expect Aldis to do everything in his power to emerge victorious at the expense of Myers’s NWA in-ring debut. 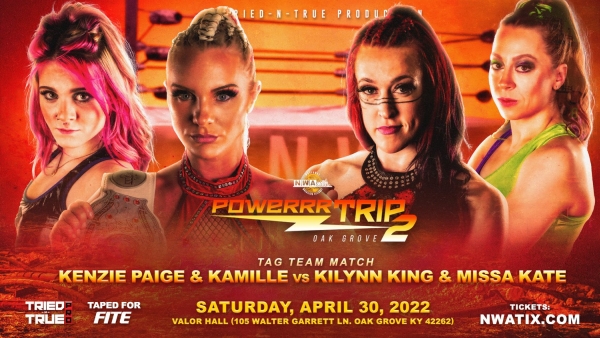 The NWA World Women’s Champion, Kamille, will also be in action at PowerrrTrip 2. However, she won’t be defending “The Burke”‘; instead, she’ll be in tag team action, working alongside Kenzie Paige to take on the duo of KiLynn King and Missa Kate. The union of Kamille and Paige is particularly interesting given that they’ve shared an NWA ring in the past. Think back to NWA’s By Any Means Necessary event this past October, where “The Brickhouse” successfully defended the NWA women’s title against the self-proclaimed “Princess.” This Saturday, the two will join forces, and while having the current reigning champion is a major advantage for this particular team, their opponents shouldn’t be overlooked.

Having learned under the likes of The Dudley Boyz and Billy Gunn, KiLynn King may be best known for her various appearances on All Elite Wrestling programming. Those that have watched AEW Dark and Dark: Elevation, in particular, have seen her pick up victories over the likes of Jazmin Allure, Dani Jordyn, and Julia Hart. She’s also been making appearances in the NWA as of late, recently emerging victorious over Natalia Markova on NWA USA. At NWA PowerrrTrip 2, King teams with “Chicago Sweetheart” Missa Kate, who’s made her own appearances on NWA programming, most notably during last year’s Hard Times 2 pre-show. Alongside a formidable powerhouse in King, Kate will aim to make PowerrrTrip 2 a winning night. 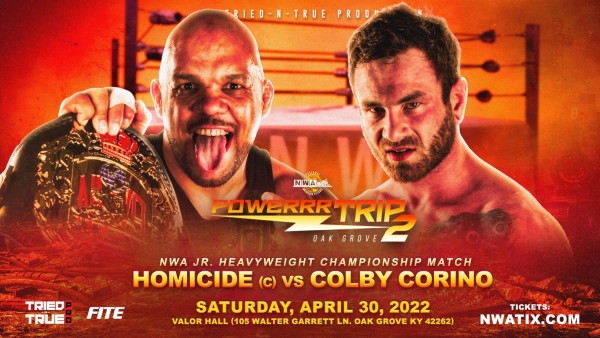 In one of the featured matches of NWA PowerrrTrip 2, Homicide will defend his Junior Heavyweight Championship against Colby Corino. To provide some background, Homicide captured the revived title on Night 2 of the Crockett Cup 2022 event, emerging victorious in a four-way contest; one of the other participants in said contest was Corino himself. Homicide’s career spans nearly three decades, having won singles and tag team gold alike in such organizations as IMPACT Wrestling and Ring of Honor. “The Notorious 187” is nothing short of a veteran of the squared circle and the NWA Junior Heavyweight Championship is only the latest in his long line of accomplishments. At PowerrrTrip 2, he makes his fifth junior heavyweight title defense against a game Corino.

As the self-proclaimed “Last Bastion of Professional Wrestling,” Colby Corino holds a high opinion of himself. He possesses a solid in-ring style, which should come as little surprise given that he is the real-life son of former ECW World Heavyweight Champion Steve Corino. However, his alliance with The Fixers, one of the NWA’s resident powerhouse tag teams, has only emboldened him further. Young Colby’s journey to championship gold in the NWA has led him to PowerrrTrip 2, where he intends to take the junior title off Homicide. Whether Corino will have The Fixers in his corner for his important championship match remains to be seen. Nonetheless, this will be a title match to keep an eye on as we head into the weekend.

Stay tuned to the Last Word on Pro Wrestling for more on this and other stories from around the world of wrestling, as they develop. You can always count on LWOPW to be on top of the major news in the wrestling world, as well as to provide you with analysis, previews, videos, interviews, and editorials on the wrestling world. Tickets for NWA PowerrrTrip 2 are available via SimpleTix. A broadcast taping of the event will also air on FITE.