Gatoh Move Pro Wrestling is only days away from its return to live events. The fact that this return marks the company’s first show in front of fans in over two years is nothing short of remarkable. Both new and longtime fans of the promotion will undoubtedly be excited to see what Gatoh Move has in store. Before this time comes, however, there are several episodes of ChocoPro to be held. As listed below, ChocoPro episodes #222, #223, #224, and #225 will be held. In an effort to consolidate the action set to come, see the full cards and a few featured matches below.

On ChocoPro #222, Sayaka Obihiro celebrates 12 years in professional wrestling. Gatoh Move’s “Blue Heart” began her wrestling career in late April of 2010, first competing for Ice Ribbon. Sinc.e then, she developed tremendous skill in not only her home promotion but organizations including Japanese Women Pro-Wrestling Project, DDT Pro-Wrestling, and of course, Gatoh Move. In fact, she’s been instrumental in the development of the latter, even before the advent of ChocoPro, which speaks to her importance in the company. In celebration of 12 years in wrestling, “Obi-san” will square off with the current Super Asia Champion, Baliyan Akki. Needless to say, Obihiro will be looking to pick up a victory on this special episode of ChocoPro. Against a wrestler as dominant in the walls of Ichigaya Chocolate Square as Akki, however, this will be easier said than done. 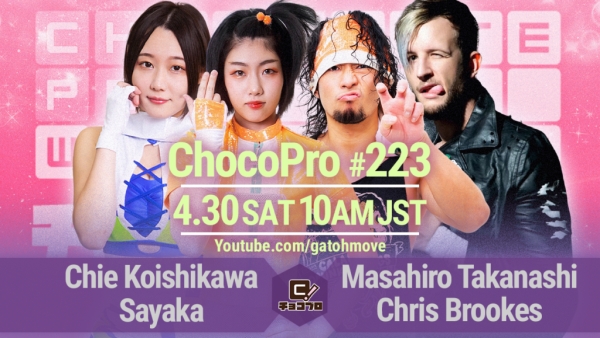 ChocoPro #223 will see the Asia Dream Tag Team Champions, Calamari Drunken Kings, in non-title competition. Carrying the purple belts into Ichigaya Chocolate Square, Masahiro Takanashi and Chris Brookes will take on the fourth-generation Gatoh Move duo of Chie Koishikawa and Sayaka. CDK have represented Gatoh Move in other promotions as of late, Pro Wrestling BASARA and DDT included, showcasing their abilities as a tag team. Given their relationship as long-time partners and friends, this should come as little surprise. Furthermore, they’re double champions, also holding DDT’s KO-D Tag Team Championship. Despite the obvious disadvantage they’re up against, Koishikawa and Sayaka will be no less motivated heading into this episode. Can these fourth-generation stars pick up an upset victory over the tag team titleholders? 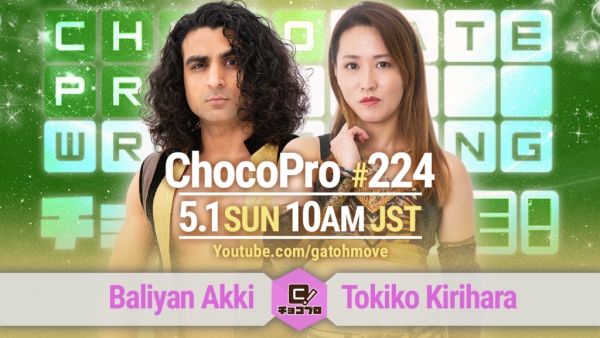 Tokiko Kirihara Tests Herself Against the Champion

On ChocoPro #222, Tokiko Kirihara will be in action, as “Otoki” teams with Mei Suruga against the duo of Chie Koishikawa and Masahiro Takanashi. This will be far from Kirihara’s only match during this stretch of shows, however. In the main event of ChocoPro #224, Kirihara goes head to head with Baliyan Akki. If there’s any one fourth-generation Gatoh Move star that can match up to Akki on a physical level, it would be Kirihara. The two have competed against each other in singles action several times before, and while it was the current Super Asia Champion that won each encounter, she made certain that each win was a hard-fought one. As Gatoh Move fast approaches its return to live events, perhaps there’s no more apt time for a miracle than now. Despite Akki entering this match as Gatoh Move’s top champion, it wouldn’t be entirely far-fetched to see “The Golden Six-Pack” overcome the sizable challenge to come. 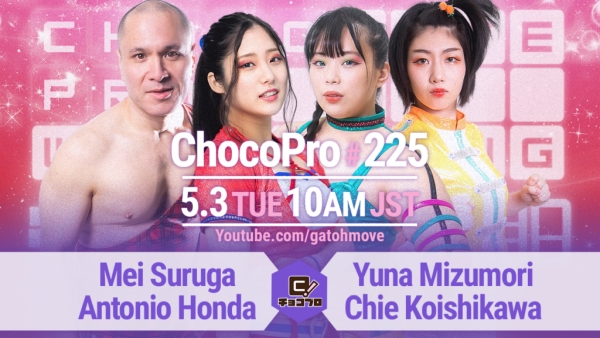 In the tag team main event of ChocoPro #225, Apples and Honey reunite as Mei Suruga teams with Antonio Honda to battle the powerful and energetic duo of Yuna Mizumori and Chie Koishikawa. This match marks the first time Suruga and Honda have tagged in over a year. Think back to ChocoPro #94 back in March of 2021, which saw them face Mizumori and Emi Sakura in a losing effort. Though they are far from regular tag team partners – Suruga is best known as one-half of Best Bros alongside Baliyan Akki while Honda frequently teams with Tokiko Kirihara to form White Comaneci – Apples and Honey is a duo that promises ample mischief. One must wonder whether “Yunamon” and “Chiezo” can overcome this unique tag team challenge on Episode #225. Nonetheless, this will be a tag team main event to keep an eye on.

The episodes above will air live on the Gatoh Move YouTube channel for free before being available for on-demand viewing afterward. To support the company, you can sign up for their Patreon, which features multiple tiers, or their own on-demand streaming service linked below.