This Friday, Game Changer Wrestling makes its Columbus, Ohio debut with GCW Find You Again. With this event set to take place at Franklin County Fairgrounds, GCW intends to make this newest splash a success. There is plenty of action set to take place, featuring Allie Katch and EFFY of BUSSY, Blake Christian, Tony Deppen, and many other stars that have become synonymous with the independent wrestling powerhouse. Whether you’re planning on attending the show in person or watching it at home on FITE, the card shows promise. Take a deeper dive into the action to expect. 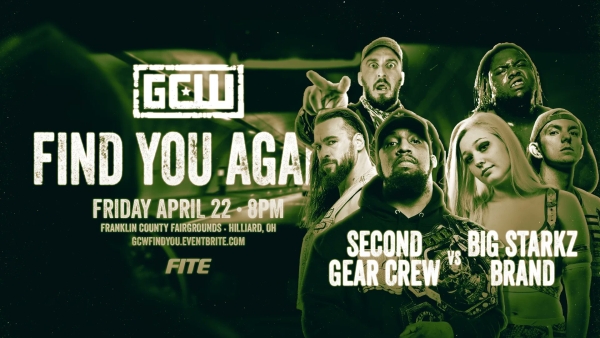 The Crew Battles The Brand

In six-person tag team action, at GCW Find You Again, AJ Gray, Mance Warner, and Matthew Justice of Second Gear Crew take on Billie Starkz, Cole Radrick, and Calvin Tankman, collectively known as Big Starkz Brand. Longtime GCW fans will be very familiar with SGC, given that it’s one of the most prominent groups in the promotion. From going to war with 44OH in a War Games Match to defending tag team gold against various opponents, this group has been through it all and never backs down from a challenge. Furthermore, with a trio such as Gray, Warner, and Justice, expect nothing but the most hard-hitting offense this Friday. Suffice to say, their opponents will have a formidable battle to come.

Big Starkz Brand, as a collective, isn’t nearly as well-known to the GCW faithful. The three individuals involved in this group have competed against each other in different promotions. Case and point, this past January, Starkz clashed with Tankman at a Paradigm Pro Wrestling event. Starkz’s battles with Radrick span many more companies, so it’s safe to assume they’re familiar with each other as well. On paper, “Space Jesus” Starkz teaming with “The Raddy Daddy” Radrick and “Heavyweight Hustle” Tankman makes for an unorthodox trio. However, if their unique skill sets can gel, they may very well pick up the victory against the more established group. 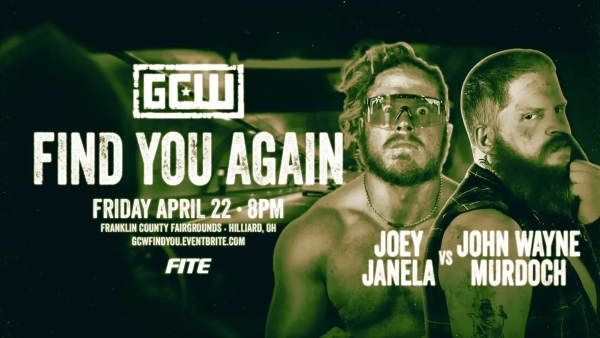 A Battle of the Baddies

In what’s certain to be one of the most interesting matches set for this Friday, “The Bad Boy” Joey Janela goes one-on-one with the reigning GCW Ultraviolent Champion, John Wayne Murdoch. To say that these men have been up to nefarious antics would be an understatement. On one side, Janela has been nothing short of a thorn in the side of X-Pac, even defeating the WWE Hall of Famer at Spring Break 6 last month. Meanwhile, Murdoch was arguably the villain of WrestleMania Weekend, defeating Alex Colon at that same Spring Break event to capture the Ultraviolent Championship. Janela and Murdoch will square off at GCW Find You Again in what’s certain to be a battle of the baddies.

It’s also worth noting that this marks their first singles encounter with each other. Given how long Janela and Murdoch have been in GCW, even appearing on the same shows as each other, it may surprise fans to know that they’ve never once touched. For this reason alone, their Find You Again bout will be must-see. Furthermore, given the in-ring styles of both men, it’s safe to assume that matters will become chaotic soon after the bell rings. Expect everything from panes of glasses to doors to barbed wire to come into play, each foreign object being used to inflict the utmost pain. This will be a first-time match not to miss. 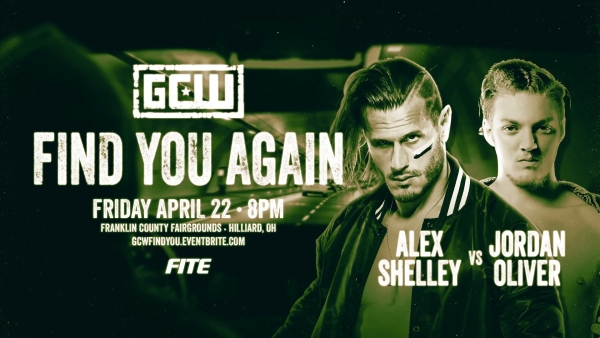 At GCW Find You Again, Alex Shelley makes his much anticipated return to Game Changer Wrestling. He was last seen at the company’s Most Notorious event, where he picked up a victory over “The Zombie Princess” himself, Jimmy Jacobs. Since then, the Detroit-born indie veteran has kept busy, whether appearing in IMPACT Wrestling, competing in Pro Wrestling Guerrilla’s Battle of Los Angeles tournament, or representing Prestige Wrestling as its top champion. With roughly two decades of experience under his belt, Shelley prides himself on being a student of the game. Moreover, his in-ring work speaks to this. This Friday, Shelley steps back into GCW to face “The Clout Cutter,” Jordan Oliver.

Young, Dumb… Young, Dumb… Young, Dumb, and Broke – any longtime GCW fan will know this verse well. Jordan Oliver is one of the most popular stars in the promotion, keeping fans on his side with his trademark fast-paced offense and high-flying ability. This New York native has been nothing short of prevalent in GCW throughout 2022. He’s also picked up victories over many formidable indie stars, Alec Price, Leon Ruff, and Dark Sheik, just to name a few. At Find You Again, Oliver takes on Shelley in a first-time match. Will this night belong to the up-and-coming Oliver or will the veteran presence of Shelley win out in Columbus?

Stay tuned to the Last Word on Pro Wrestling for more on this and other stories from around the world of wrestling, as they develop. You can always count on LWOPW to be on top of the major news in the wrestling world, as well as to provide you with analysis, previews, videos, interviews, and editorials on the wrestling world. GCW Find You Again is set to air Friday at 8 PM EDT on FITE. Tickets are also available via Eventbrite.