Game Changer Wrestling begins its tour of the Midwest with GCW Most Notorious. This is the first time that the independent wrestling powerhouse has been in the Detroit area since November when the company held its Evil Deeds event. This Friday, live from Harpos Concert Theatre in Detroit, Michigan, GCW will host a number of promising encounters featuring Jimmy Jacobs, Rich Swann, Ricky Morton, and many more. Whether you plan on attending the show in person or watching from the comfort of your home via FITE, here’s what to know. 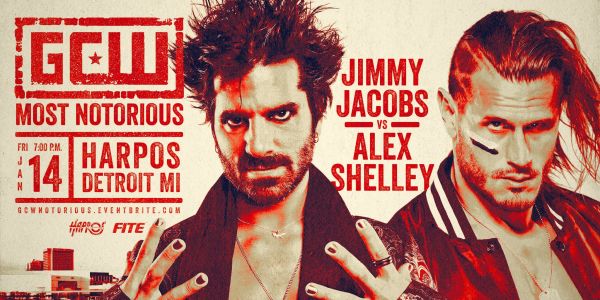 The Zombie Princess Returns to GCW

The first match announced for GCW Most Notorious is perhaps the most intriguing of the bouts set for this Friday. “The Zombie Princess” Jimmy Jacobs will be making his return to the company to take on a man he shares history with, Alex Shelley. The history in question dates back to the early 2000s, where they competed in numerous independent organizations, most notably IWA Mid-South. From competing for championship gold to putting their own hair on the line to participating in grueling match series, Jacobs and Shelley have been through it all as they developed as wrestlers. Now, roughly 8 years since their last singles encounter – they last faced off at Xtreme Intense Championship Wrestling in 2014 – they will share the ring once more.

Jacobs has had a modest wrestling career throughout 2021, not only in GCW but a number of other promotions. While he may not have been wrestling full-time, his encounters against the likes of Jordan Oliver in Violence X Suffering and Jon Moxley in REVOLVER generated considerable attention. Meanwhile, Shelley has made the most of his year since returning to the scene in September 2021, even capturing the IWTV Independent Wrestling World Championship the month after. Whether in GCW, the revived Pro Wrestling Guerrilla, or elsewhere, the Detroit-born “Student of the Game” has been an incredible indie attraction. This upcoming bout between Jimmy Jacobs and Alex Shelley is set to deliver. 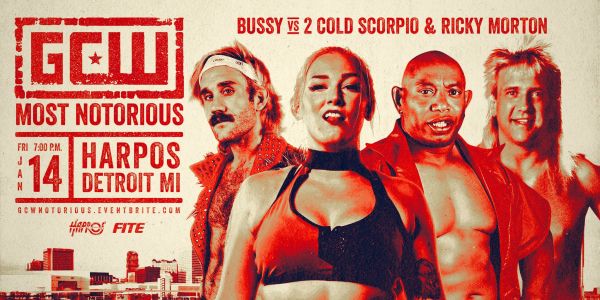 BUSSY vs. 2 Cold Scorpio and Ricky Morton can best be described as a clash between new school and old school sensibilities. The team of Allie Katch and EFFY has become a favorite to many GCW fans, not only due to their often violent matches but their brash, colorful personalities. 2021 has been a major year for them, whether it was their continued work in different promotions or their long-standing grudge with the self-proclaimed “Deathmatch King and Queen,” Matt Cardona and Chelsea Green. BUSSY intends to make 2022 their year by any means necessary. One of the best platforms to do so would be GCW Most Notorious, where they face off against a tag team of veterans.

Set for action this Friday is the unlikely duo of 2 Cold Scorpio and Ricky Morton. While they are respected names in their own ways, on paper, they wouldn’t be the first makeshift duo one would think of. In fact, the only time they ever shared a ring was WrestleMania XIV in 1998, where they competed in a tag team battle royal on opposing sides. Independent of one another, Scorpio and Morton have seen success, whether it was the former’s multiple titles in Extreme Championship Wrestling and World Championship Wrestling or the latter’s historic run alongside Robert Gibson as The Rock ‘n’ Roll Express. This Friday, Scorpio and Morton team up for the very first time. The varied elements at play here make this match one to keep an eye on. 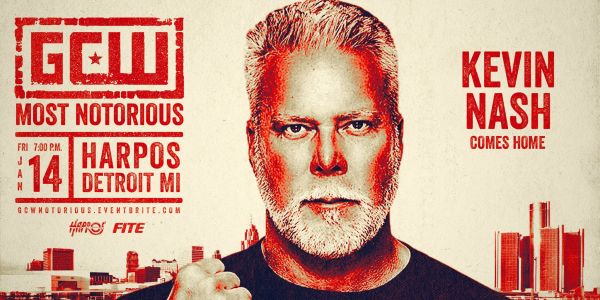 In addition to the ring-in action that has become a staple of Game Changer Wrestling, two wrestling legends return to their hometown of Detroit. One of the names in question is Kevin Nash, whose wrestling career spans nearly 3 decades. In addition to being a former Tag Team, Intercontinental, and World Heavyweight Champion in the World Wrestling Federation, he has won 5 world and 9 tag team titles in WCW. Furthermore, his role in changing professional wrestling during the mid-to-late 1990s, particularly the formation of the New World Order, is nothing short of historic. This Friday, “Big Daddy Cool” makes his first-ever GCW appearance, in his hometown at that, and it’s fair to say that the crowd in attendance will give him a royal welcome.

The same can be said for the second legend making his hometown return, Sabu. “The The Homicidal Suicidal Genocidal Death-Defying” ECW Original’s scarred body tells a story. He became known for his high-flying, risk-taking wrestling style, and while his offense may not have always been pretty, it was more often than not effective. Sabu held several accolades throughout his 30-year-plus career, including 2 ECW World Heavyweight Championships and 3 ECW World Tag Team Championships. While Sabu was successful in “The Land of Extreme,” his work in promotions including Total Nonstop Action Wrestling, World Wrestling Entertainment, and elsewhere can’t be ignored. Like Nash, he will be in attendance this Friday at GCW Most Notorious.

GCW Most Notorious will take place in Detroit, Michigan on January 14, 2022.

Stay tuned to the Last Word on Pro Wrestling for more on this and other stories from around the world of wrestling, as they develop. You can always count on LWOPW to be on top of the major news in the wrestling world, as well as to provide you with analysis, previews, videos, interviews, and editorials on the wrestling world. GCW Most Notorious is set to air Friday at 7 PM EST on FITE. Tickets are also available via Eventbrite.