This Friday, live from the Knights of Columbus venue in Detroit, Michigan, Game Changer Wrestling will hold GCW Evil Deeds. This is just one show of what will be a triple-decker endurance of sorts. While GCW will partner with Horror Slam Wrestling the night prior for a co-hosted show, the Nick Gage Invitational 6 will take place the night after Evil Deeds. Despite being sandwiched between two events, there is much to anticipate and see this Friday. Before it all takes place, here are a few things that you should know. 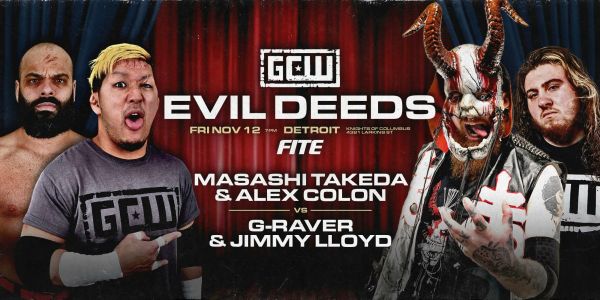 At GCW Evil Deeds, a new Ultraviolent Champion will return. For those that are unaware, last month, Drew Parker lost the GCW Ultraviolent title to Masashi Takeda at a Big Japan Pro-Wrestling event. “The Crazy Kid” toppled Parker in what was dubbed a “Halloween From Hell Deathmatch,” ending the latter’s 93-day reign. Takeda has been working in Japan throughout 2021, not only for BJW but Total Triumph Team, Pro Wrestling FREEDOMS, and elsewhere. However, he is no stranger to GCW, as he made various appearances for the promotion since 2017, even winning the Nick Gage Invitational 3 in 2018. Having been away from the promotion since February of 2020, last appearing at Live Fast, Die Young, Takeda intends to return in a major way.

At Evil Deeds, Takeda teams with fellow deathmatch veteran and inaugural GCW Ultraviolent Champion Alex Colon. In fact, it was Parker that previously defeated Colon for the title on Night 1 of GCW Homecoming earlier this year. Takeda and Colon have waged war around the world since 2018, so it will be interesting to see how they fare as partners. Their opponents will be G-Raver and Jimmy Lloyd, both of whom are familiar with deathmatch wrestling as a genre. This is an interesting duo, to say the least, as the former GCW Tag Team Champions are known by fans as fierce rivals. Can they work together to overcome the foundation and the most recent pillar of the ultraviolent title scene in GCW? 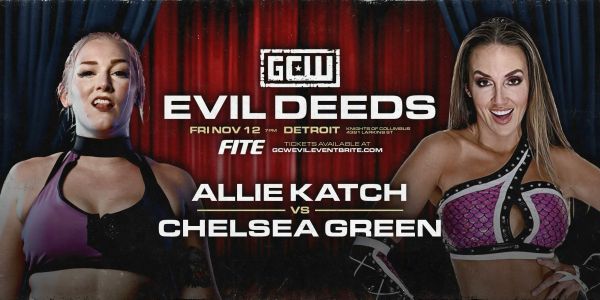 A Grudge Comes to a Head

It’s fair to say that the feud between EFFY and Internet Champion Matt Cardona brought with it a few allies. Whether he was verbally antagonizing Cardona or going to war with the “Alwayz Ready” wrestler, EFFY has seldom been without BUSSY teammate Allie Katch by his side. In fact, she accompanied him to the ring at GCW Fight Club last month when he defended the Internet title against Cardona. This match would go in Cardona’s favor, though not without assistance from his real-life fiance Chelsea Green. With said assistance, Cardona regained the Internet Championship and planted a kiss on Green, both events to the chagrin of the crowd in attendance at The Showboat.

Since then, Katch and Green haven’t been shy about trading barbs online. Stylistically, their in-ring approaches are very different as well. Despite priding herself on being a “serious wrestler,” Katch is just as willing to take matters to the extreme if it means picking up the victory. Meanwhile, Green’s style leans more toward technical, though her craftiness and ability to dig deep into the darker side of her personality has been well documented. At GCW Evil Deeds, Allie “Katch as Katch Can” will look for a measure of revenge as she battles “The Hot Mess” at Knights of Columbus in Detroit, Michigan. 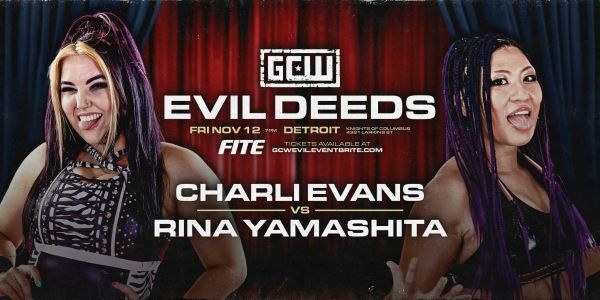 Making her Game Changer Wrestling debut, at GCW Evil Deeds, is Rina Yamashita. This joshi puroresu star began her wrestling career in 2013 and has since become one of the most in-demand stars in her home country of Japan. From Pro Wrestling WAVE to SEAdLINNNG to DDT Pro-Wrestling, Yamashita has held gold in various promotions. Currently, she is Ice Ribbon’s FantastICE Champion, having won the title this past June. Furthermore, Yamashita is among the most intense women’s wrestlers in the world today, utilizing a combination of brawling offense, technical know-how, and a dash of deathmatch combat. It’s also worth noting that she’ll be taking part in the upcoming Nick Gage Invitational 6 event the night after Evil Deeds.

On this upcoming show, Yamashita makes her GCW debut against the Australian “Violence Artist,” Charli Evans. Given her own hard-hitting offense and penchant for deathmatch wrestling, there’s perhaps no opponent better suited for Yamashita’s debut on American oil. Evans is an accomplished wrestler in her own right, having won gold in such organizations as Sendai Girls in Japan and Pro-Wrestling: EVE in the United Kingdom. Without question, Evans’s career has taken her around the world and back again. Currently, she’s been on an American tour of sorts, having recently wrestled for Illinois-based promotions Saint Louis Anarchy and Freelance Underground. This Friday, she makes her way to GCW for what may be the most intense battle of her career. This will be one not to miss.

Stay tuned to the Last Word on Pro Wrestling for more on this and other stories from around the world of wrestling, as they develop. You can always count on LWOPW to be on top of the major news in the wrestling world, as well as to provide you with analysis, previews, videos, interviews, and editorials on the wrestling world. GCW Evil Deeds is set to air Friday at 7 PM EST on FITE.