Despite a severe lack of interest in the show itself, WrestleMania 2022 Weekend was a massive success. It was a vast improvement over the last two years, serving as a symbol of how much the wrestling world has healed from COVID-19. Even WrestleMania itself exceeded expectations, most having written it off due to a seemingly lackluster card. WWE somehow managed to deliver good outings on both nights, though, even delivering a couple of big moments and matches. Outside of WWE though, the wrestling world flourished. As stated earlier, COVID restrictions greatly crippled the Mania weekends of the last two years. What was normally the best time to be a North American wrestling fan, practically a wrestling Mardi Gras with companies and promotions of all forms and sizes coming to one area to deliver the best of what their product has to offer.

There were many shows in Dallas over the weekend and even more matches. Here’s the best of what happened over WrestleMania 2022 Weekend. Nothing is in any particular order or ranked in any way, as this is just a showcase for some of the best performances. No favorites played here.

FTR vs The Briscoes: ROH Supercard of Honor

Starting with the easiest and most obvious choice, if FTR vs The Briscoes isn’t the best match over the weekend, it’s certainly been the most talked about. A dream match for years and an inevitability for months, this match was, for all intents and purposes, set up entirely to under-deliver. And yet, on a huge stage with tens of thousands of eyes on them, they over-delivered. What these four men did that night was highly commendable. Without relying on finisher spam, high production value, or even a TV build, they managed to have a spectacularly dramatic and physical war that felt epic. The use of blood was brilliant, the psychology was brilliant, everything about this match is just brilliant. It’s an instant classic that stole the show before the weekend even began. Go out of your way to watch it if you haven’t already – it’s spectacular stuff. 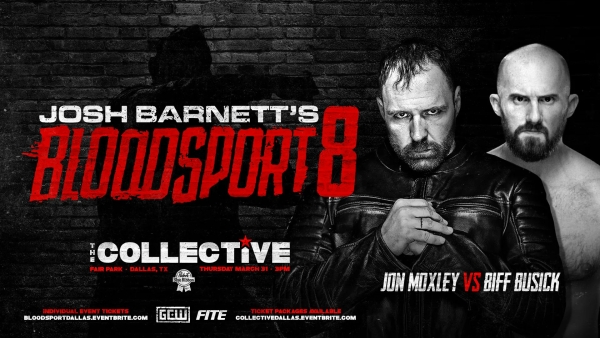 Josh Barnett’s Bloodsport 8 was an unbelievable show. From top-to-bottom, the card was solid all the way, not just on paper but in execution as well. Not a single match was outright bad or even average, and every moment of action was interesting and violent, just as it should be. There are several moments and matches on this show that one should go out of their way to watch, making the show watchable in its entirety. If one is looking for the best of the show though, look no further than Jon Moxley vs Biff Busick. Since being released from WWE, Biff Busick has, in classic Busick fashion, very simply and shortly been requesting the best of the independent scene. Moxley was one such opponent, and no place would be a better home for such a match than Bloodsport.

The two had a violent, bloody clash that left fans talking about it for days, despite not even being the main event of the show. It’s likely not the last we’ll see of these two against each other, perhaps even in Bloodsport again someday, but suffice to say that if you like a dash of hyper-realism to your wrestling, this is the match for you.

Much unlike them, and perhaps done by accident, WWE actually managed to tell a coherent and compelling story with Bianca Belair and Becky Lynch. As any fan of the product or Belair knows, Lynch returned and defeated her for the Raw Women’s Championship at SummerSlam in August of 2021, doing so in less than 30 seconds. The embarrassing loss to Bianca was incredibly damaging and was understandably met with outrage from fans. In the end though, by hook or crook, they managed to turn it into a good story.

In working her way back to the top and taking the belt back off Becky at Mania, Bianca managed to do something fellow midcarders-turned-main eventers haven’t been able to do; reclaim her status on a big stage. The match itself was stellar, easily the best actual wrestling match on either night of WrestleMania. It incorporated the story into the action very well, with Becky managing to get the upper hand early in the match and even keep it for a while, but Belair was prepared for the early onslaught this time. As the match progressed, Lynch became more frustrated and desperate, as it became clearer she wouldn’t be getting the same fluke victory over Bianca this time as she did at SummerSlam. In the end, Bianca managed to conquer her demon and redeem her loss to Lynch and get her second WrestleMania championship win in a row.

Easily the bloodiest match of the weekend, Alex Colon vs John Wayne Murdoch is a perfect example of what deathmatch wrestling should be in 2022. Despite its inherently violent nature it still had a story to tell and did so very well. Of the previous two matches, Colon won both, making John Wayne the underdog with something to prove and boy did he. Right from the start of the match, Murdoch took the fight straight to Alex, busting him open within the first few minutes. He continued afterward to pummel Colon around the ring both inside and out, smashing him with light tubes and throwing him through doors as he does so. Alex Colon eventually made comeback, busting Murdoch open in turn. In the end, Colon submitted to a cross-arm breaker after missing a lariat. injuring his arm on the ring post in the process.

Afterward, Murdoch cut a promo to a heel reaction that most wrestlers can only dream of. It’s a bloody match to be sure, but one that stands out well among many matches that took place this weekend.

While far from their first match together, Mike Bailey and Bandido from the Mark Hitchcock Memorial SuperShow was an easy highlight of the weekend, being a highlight reel of a match itself. It was a big, crazy spot fest, but it was a fun big crazy spot fest. There isn’t a whole lot to say about this one. Both men have terrific chemistry and are very athletic, and steal the show despite not even being one of the main advertised matches. And all a day before Bandido would defend the ROH world title. It’s not quite as good as their Westside Xtreme Wrestling match, but it’s still a quality viewing experience.

Mike Bailey was easily the MVP of the weekend. Everything he touched was either good or great like a wrestling version of King Midas. This match from Bloodsport 8 against Yuya Uemura was no different. Many have compared Uemura to a young Hiroshi Tanahashi, or even Antonio Inoki, and it goes beyond just how he looks and presents himself. In many ways, the young lion sent on excursion exudes old-school strong-style wrestling, with most of his offense based around kicks and grappling, making him a perfect opponent for someone like Bailey.

Despite the fight only being about 7 minutes long, it still managed to be incredibly dramatic. Speedball had the edge in experience and it showed, with him dominating most of the fight and seemingly having Uemura put away multiple times. In the end, however, it was the young lion who came out on top in an underdog victory against one of the greatest wrestlers in the world today. Yuya Uemura is going to be a great talent once back in New Japan Pro-Wrestling, and Mike Bailey will continue to shine wherever he goes, but let’s all hope we get to see this match again sometime down the road.

While expectations for this match were tempered going in, with both Eddie Edwards and Tomohiro Ishii being well past their in-ring prime, they managed to deliver a hell of a match at IMPACT Wrestling’s WrestleCon show, Multiverse of Matches. It was everything one would want a match between these 2 to look like. Both men worked at a pace and intensity that one would’ve expected from them 5 years ago, not today. It was nice to see both men motivated for once, and even nicer to see what was born of that motivation. They blistered each other with stinging chops, pounded each other with stiff forearms, and threw their bodies into one another like a demolition derby. It was good old-fashioned Kings Road style goodness with the benefit of a hot Dallas crowd and is well-deserving of its spot on this list.

Despite being in the creative gutter so to speak, NXT 2.0 managed to put together a fairly fun and easily watched show with Saturday’s Stand and Deliver event. Not a single match missed and every performer on the show delivered, and this match is a prime example. Multi-man ladder matches are usually fun, fast-paced spot-fests and this one was no different. Given the cast of talent in the match, it should be no surprise, really. It even ended with a feel-good moment, with Cameron Grimes finally winning the North American title in memory of his late father. The only real downside to this match was Grayson Waller nearly breaking his arm in an incredibly ill-advised spot. Besides that, a wonderfully chaotic match.

WrestleMania 2022 Weekend was an incredibly enjoyable time to be a wrestling fan. No matter what kind of wrestling you like, there was something to appeal to your taste over the weekend. Whether you like bombastic characters and storytelling, bloody and violent action, technical and athletic competition, or all of the above. So seek out some of the matches here, and have a good time.