Gatoh Move Pro Wrestling is just one episode away from the ChocoPro Season 12 finale. To say that it’s been an eventful ride to get to this point would be an understatement, but Gatoh Move isn’t a company looking to rest on its laurels. On ChocoPro #216, the penultimate episode, two tag team contests will take place. At the end, as per usual, the participants will participate in the post-match janken tournament, striving to win the coveted chocolate prize. Without any further delay, let’s take a look at what this episode has to offer. 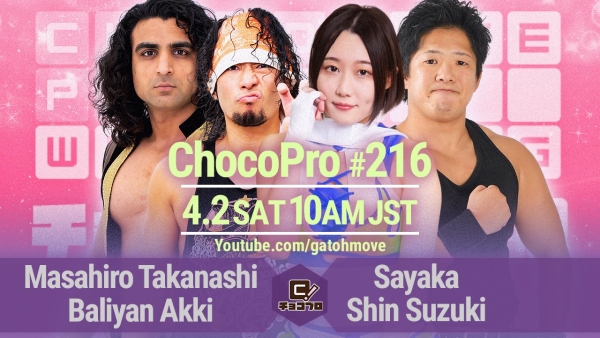 Masahiro Takanashi and Baliyan Akki vs. Sayaka and Shin Suzuki

Opening ChocoPro #216 will be a tag team contest featuring two of the company’s titleholders. One-half of the Asia Dream Tag Team Champions, Masahiro Takanashi, teams with Super Asia Champion Baliyan Akki to battle the duo of Sayaka and Shin Suzuki. Given the fact that Akki, along with Mei Suruga, lost the Asia Dream tag team titles to Takanashi and Chris Brookes, it will be interesting to see how these former opponents coincide. Akki should feel confident heading into this tag team match, however, especially given his recent successful title defense against Gatoh Move Founder Emi Sakura on Episode #214. Will this confidence help the two titleholders achieve victory here?

For the first time, “The Beautiful Cosplayer” Sayuri teams with the good-natured yet technically sound Shin Suzuki. One must wonder how they will coexist in their first outing as partners, though their individual skill sets speak for themselves. Sayaka has grown by leaps and bounds throughout her various ChocoPro matches, adopting a hard-hitting approach that makes her deceptively devastating. It’s important to note that she’s coming into this match off a loss, however, following Episode #214. The same can be said for Suzuki, who last stepped into Ichigaya Chocolate Square on Episode #213. Needless to say, this duo will be all the hungrier to achieve victory.

In the main event of ChocoPro #216, RESET reunites. Longtime joshi puroresu fans and enthusiasts of the subgenre in question will know that Emi Sakura and Kaori Yoneyama have been successful as a duo in many organizations. Among the organizations they’ve captured tag team gold in are Japanese Women Pro-Wrestling Project, Ice Ribbon, and Gatoh Move. The last time they held tag team gold was in the latter, becoming Asia Dream Tag Team Champions. In addition to being longstanding tag team partners, they are also incredibly close friends, so one must imagine how Yoneyama felt when Sakura returned home. On this episode, their combined experience will be put to the test against a duo with momentum behind them.

Back on Episode #214, “The Apple Girl” Mei Suruga teamed up with Haruka Umesaki of World Woman Pro-Wrestling Diana fame. Keep in mind that these two have been pitted against each other as rivals, wrestling in various joshi promotions. Despite this, they came out victorious on this episode against Yoneyama and Sayaka, even embracing afterward. It’s difficult not to think that Suruga and Umesaki are confident heading into this match. Not only did “Mei-chan” win World Wonder Ring Stardom’s recent Cinderella Rumble, earning a High Speed Championship match in the process, but Umesaki is a dual tag team titleholder in her own right. Between two solid teams, this match is either’s to win.