As part of The Collective, Game Changer Wrestling will present GCW For the Culture DALLAS. Live from Fair Park, the independent wrestling powerhouse will celebrate wrestlers of colors across the country and throughout the world this Friday. Not only will fans have the opportunity to see first-time encounters but championship gold will also be on the line. Simply put, this will be an event to keep an eye on during WrestleMania Week. Take a deeper dive into the action to come at this year’s For the Culture. 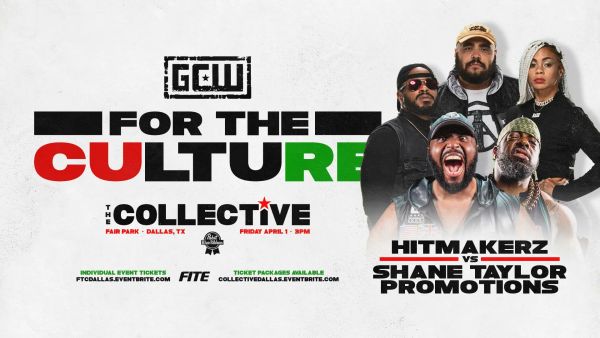 Tag Team Action at For the Culture

In tag team action, HitMakerZ will take on Shane Taylor Promotions. Formerly known as three-fourths of the WWE faction Hit Row, AJ Francis (FKA Top Dolla), Tehuti Miles (FKA Ashante “Thee” Adonis), and Briana Brandy (FKA B-FAB) have taken their skills to the bustling independent wrestling scene. Furthermore, this will be their first indie appearance since their release from WWE late last year. Thus, it should go without saying that all eyes will be on them heading into GCW For the Culture DALLAS. This is especially true when considering that they’ll be going up against former Ring of Honor stars in Shane Taylor Promotions’ O’Shay Edwards and Shane Taylor.

As a hard-hitting brawler, Edwards has proven himself as a force in ROH prior to the company’s ceasing of operations. These days, he can be seen in different independent organizations, Blitzkrieg! Pro being among the most recent. On the flipside, Shane Taylor himself has been successful in his own right since joining ROH in 2018, having the distinction of being a former World Television and Six-Man Tag Team Champion. He’s also the current reigning heavyweight titleholder of the Dallas-based VIP Wrestling. This Friday, these two members of Shane Taylor Promotions reunite to bring the fight to HitMakerZ. 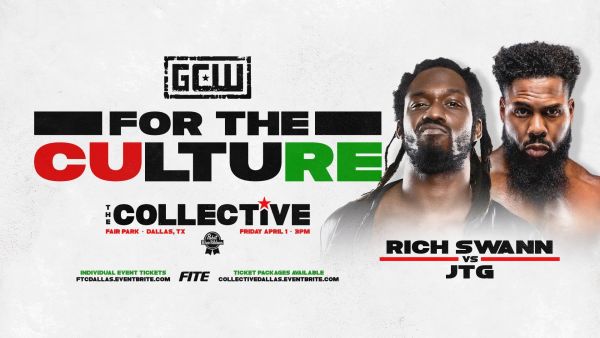 In a night of many first-time matches, this has perhaps the greatest potential of being the match of the night. Rich Swann, the former IMPACT Wrestling World Champion, will go toe-to-toe with “Jay Tha Gawd” himself, JTG. In terms of in-ring styles, Swann and JTG are incredibly distinct. While Swann is a more high-flying, fast-paced wrestler, JTG is more of an all-around fighter. One has to wonder if either man will have to change their approach heading into GCW For the Culture DALLAS. It’s also worth noting the wrestling accomplishments of both men as, despite being former WWE stars, they took paths that were unique from each other.

As mentioned earlier, Swann is a former IMPACT World Champion, having held the company’s top prize for 183 days. Other accomplishments of “The Outlandish One’s” include the IMPACT X-Division Championship, the WWE Cruiserweight Championship, and most recently, the REVOLVER Championship. Meanwhile, in terms of singles accomplishments on the independent scene, JTG is a former VIP Heavyweight Champion, holding the title for over a year before dropping it to current champion Shane Taylor this past November. Game Changer Wrestling is no stranger to hosting first-time encounters and this tradition will continue this Friday at Fair Park. 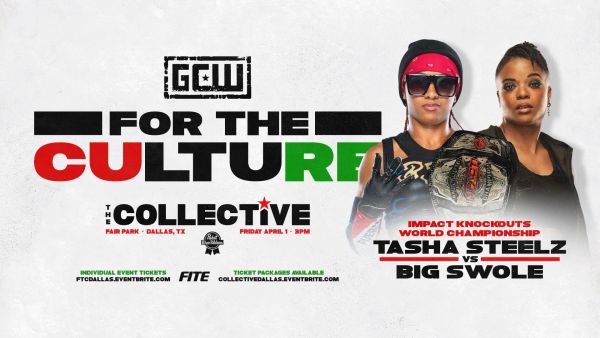 The IMPACT Knockouts Title Will Be Defended

At GCW For the Culture DALLAS, women’s championship gold will be on the line as IMPACT Knockouts Champion Tasha Steelz defends her title against Big Swole. At IMPACT’s Sacrifice event earlier this month, Steelz defeated Mickie James to become the new champion. Though the new champion has been a growing star in IMPACT, a victory over a legend such as James has only done wonders for her already powerful confidence. It can’t be denied that this same level of confidence will be intact as she makes her first GCW appearance this year. For context, Steelz last appeared at Allie Kat’s Real Hot Girl Sh*t in April of 2021, besting Trish Adora.

One of the questions heading into this year’s For the Culture is, will viewers see a title change hands? If anyone has the potential to bring this thought into reality, it would be Big Swole. Having departed All Elite Wrestling this past November, it didn’t take long for Swole to find her way back into the independent scene. She made her official indie return at Black Wrestlers Matter the following February, where she faced Tootie Lynn in the main event. At For the Culture, the stakes will be higher as she aims to capture the IMPACT Knockouts Championship. Swole is no stranger to championships, having held gold in SHINE and RISE Wrestling. Can she add more gold to her name while ending Steelz’s reign in its infancy?

GCW For the Culture DALLAS will take place in Dallas, Texas on April 1, 2022.

Stay tuned to the Last Word on Pro Wrestling for more on this and other stories from around the world of wrestling, as they develop. You can always count on LWOPW to be on top of the major news in the wrestling world, as well as to provide you with analysis, previews, videos, interviews, and editorials on the wrestling world. GCW For the Culture DALLAS is set to air Friday at 3 PM CST on FITE. Tickets are also available via Eventbrite.