NXT will leave the Performance Center for the first time in over two years for NXT Stand & Deliver. It’s a monumental moment for the stars of NXT 2.0, who will get a shot at showing what they’re made of in front of their biggest audience yet. The card is a mixture of the brand that people remember over two years ago and the new, much visually brighter version of what was once the best part of American professional wrestling. Here’s a look at the card and predictions for the top title matches.

Mandy Rose and Toxic Attraction have run NXT 2.0 pretty much since its beginning. It’s been dominance as they hold all the gold in the women’s division but that dominance surely looks to be coming to an end Saturday afternoon. Rose will have to defend the title against not one but three opponents, all of whom have a problem with her. First up is Io Shirai, who is a former NXT Women’s Champion and one of the brand’s all-time greatest. Shirai defines excellence in the squared circle and is aiming to join Shayna Baszler as the only ever two-time NXT Women’s Champion in history.

Kay Lee Ray is an interesting name. If we want to talk about dominance, Ray has shown that more than anyone in this match. She held the NXT UK Women’s Championship for a record 649 days. Ray has the championship pedigree and should be a threat in this match. The only competitor who doesn’t have the championship pedigree is Cora Jade, who made her debut in last year’s Dusty Rhodes Tag Team Classic and has since become a major part of NXT. Jade has all the potential in the world to be a champion but the odds could be too tall for her here. We’ve seen her overcome in the past though which makes her the wild card that just might win the match and championship. 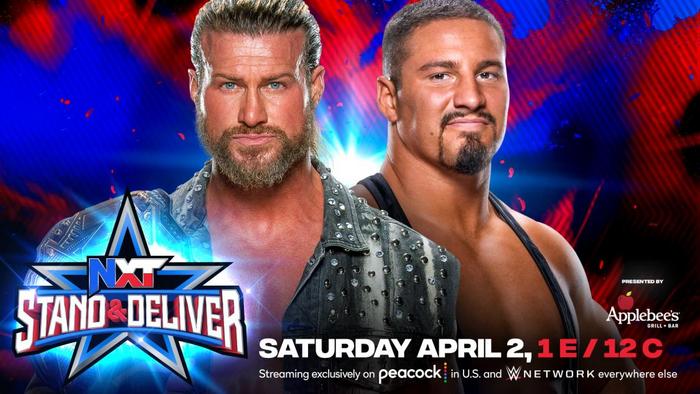 If someone told you the best thing to happen to NXT 2.0 was Dolph Ziggler, would you have believed them? The answer is very likely not. But since heading to NXT 2.0 to scout the talent of the brand, he has been fantastic in his role. In little time he proceeded to also become the NXT Champion. The twist, of course, is the man he took the title from was never pinned and is angry. Bron Breakker is everything the future of WWE needs to be great. He’s got the size, athleticism, genes, charisma, and any other trait you can think of that a world champion has. Breakker has it all. Yet, he doesn’t have the NXT Championship anymore. It could all change come Saturday.

For an event like NXT Stand & Deliver, there needed to be something special about the main event and there is. Ziggler is the veteran who was never handed anything. He’s more like Tommaso Ciampa than anyone wants to admit. The NXT Champion scratched and clawed his way for years in WWE to become a respected part of the roster. He has countless accolades to his name but still doesn’t get the respect he has earned after all this time. Ziggler’s brief stint in NXT has been the most energized and interesting he’s been in years. There’s something about a challenge that drives you. The challenge for Ziggler is to not only be NXT Champion but to show that the next big thing isn’t all that. It’s what makes this match so exciting.

Many fans believe this match has been decided before the bell even rings. Breakker wins and moves on as the face of NXT. But how many people thought Ziggler had a chance of becoming NXT Champion in the first place? Exactly. Much like Ziggler has for a lot of his career, expect this match to steal the show.