LuFisto was originally scheduled to appear here with Jordynne Grace, but it was announced mere days ago that LuFisto is suffering from a back injury and is unable to compete. While someone could have just been brought in as a replacement for LuFisto to team with Grace against Masha Slamovich and Leyla Hirsch, much of the card shifted. It seems simple enough to have Davienne take LuFisto’s spot and leave the other matches unaffected. In any event, let’s get into Beyond Wrestling presents Munky Business! 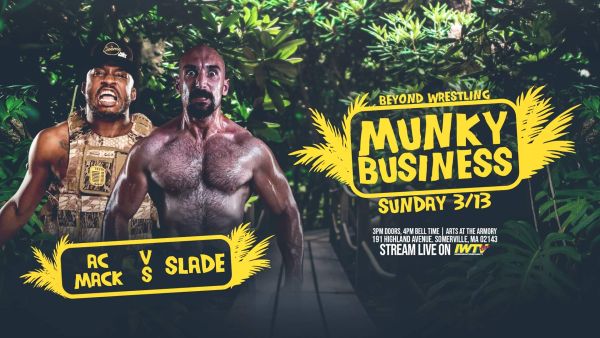 One of the things everyone should respect about Slade is he cares not where an opponent is from, silly fuels, or even titles– he just wants to fight. This is a non-title match, but Beyond Wrestling assured AC Mack that it is their way of trying to take him out so that, in his weakened state, they can make a play for Iris. Anyone who has ever seen any sort of superhero movie knows that the villain should not reveal their master plan before it actually comes to fruition or the good guy will surely thwart it. Regardless of who wins this match, Mack retains Iris and the next wrestler in line for a title shot is a robot (Not Shockwave!) from The Masked Wrestler and that should be interesting. 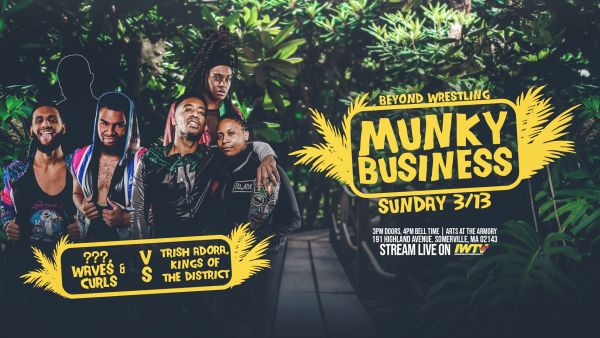 ??? & Waves And Curls vs. Trish Adora & Kings Of The District

Waves And Curls had Willow Nightingale as their partner and all seemed right with the world. Now, Waves And Curls must find a new third. However, who wants to get into the ring opposite Trish Adora– the best wrestler of 2021- and Kings Of The District, both equally as dangerous? There are some obvious answers here. Love, Doug always seems ready and has teamed with Waves And Curls before. This past Saturday, Bobby Orlando teamed with Waves And Curls, which was an amazing showcase. The short answer to this very question might be sitting on the ticket information page. Scheduled to appear on Munky Business but thus far without a match at this Beyond Wrestling event is none other than Matt Makowski. The potential trios team of Waves And Curls and Weapon X could pose a threat to Trish Adora and KOD. 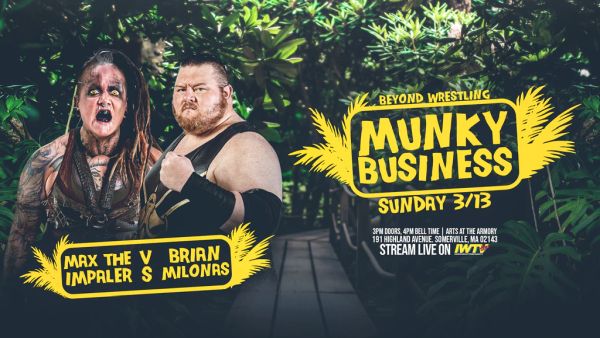 Max The Impaler vs. Brian Milonas

The feud between Max The Impaler and Brian Milonas has been ongoing since Ring of Honor was still active and it’s nice that Beyond Wrestling picked it up. Seeing these two brawl is something every fan should want. At Heavy Lies The Crown, Max The Impaler had travel issues (Even airlines fear them) and that seemed to make Milonas even more upset. Milonas is going to need that pent-up aggression to come out victorious, because it is not an easy task to survive Max The Impaler let alone beat them. This very well might be the match of the night and that’s saying a lot considering the overall card. 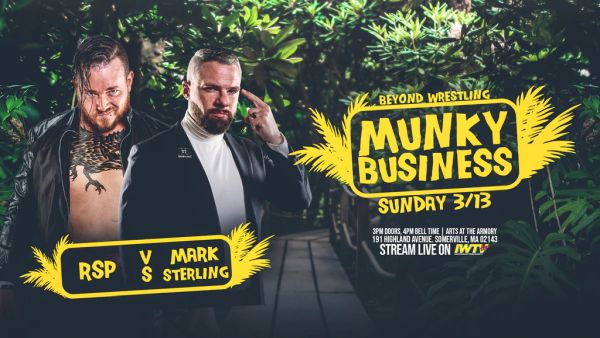 One thing that every wrestling fan should know about Mark Sterling is that he is smart. If anyone should happen to think that Sterling will be bested during this match, they don’t know him. There is a 100% chance that he has a plan in place and, for whatever reason, Rickey Shane Page’s running buddies don’t seem to like to come to Beyond Wrestling much, so RSP might be on his own at Munky Business. Additionally, before this match is over, RSP might find himself out numbered. Whether or not this can lure Atticus Cogar back to Beyond remains to be seen, but if Sterling gets the win here, it should not be considered an upset. 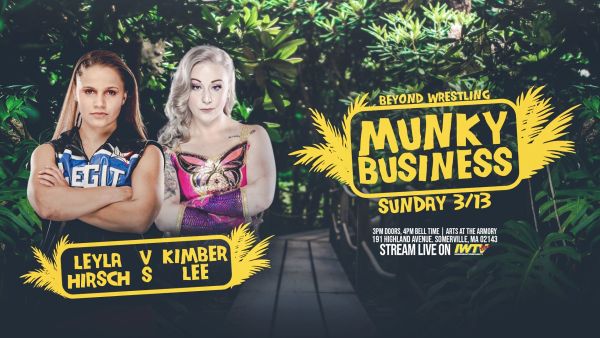 After Kimber Lee fell ill before the New Year’s Eve show, a match between Lee and Alec Price was scrapped. That match was to finally happen here, but we ended up with Leyla Hirsch vs Kimber Lee, which isn’t a bad matchup and these two will likely take the fight to each other. However, it doesn’t have the same backstory because it wasn’t scheduled to happen before. This match should be fun and the winner is going to be whoever wants it more and is less confused about the changing of the opponents. 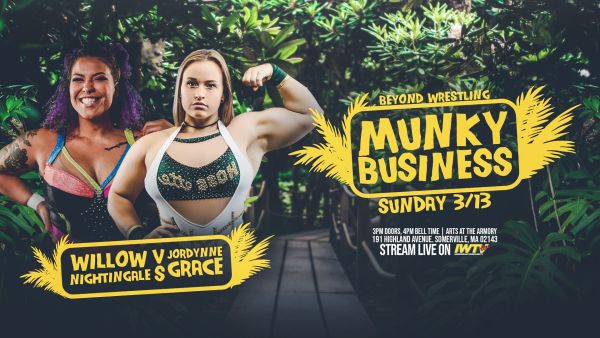 Willow Nightingale was originally supposed to be a part of the trios team with Waves And Curls- which would have just been excellent- but now, it’s almost as if she was pulled from that match to go one on one with Jordynne Grace as some sort of punishment. Are the powers that be upset that Nightingale took the pinfall loss to AC Mack, causing Uncharted Territory to go to the South? In the trios match, Nightingale would have had some great backup. Now, she is left on her own and this will certainly be a tough test for her- if Jordynne Grace does, in fact, show up. 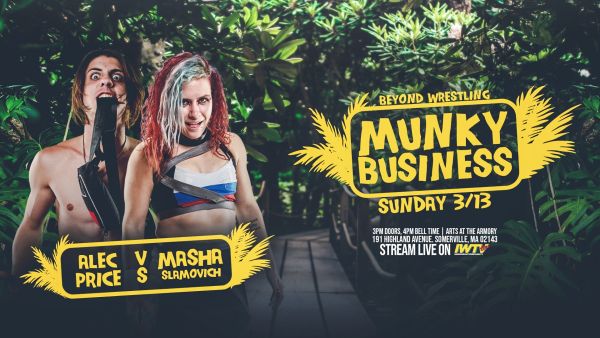 Coming out of Uncharted Territory, this seemed like the biggest match that could have been made but hadn’t been done yet. Both Masha Slamovich and Alec Price had their best matches during Season 3 and it’s difficult to choose which one of them would be the Season 3 MVP. Slamovich recently lost a title match against AC Mack, so it might also be assumed that if Price comes out with the victory, he could be in line for the next shot at Iris. Price has already been to the South and does not seem to care about this North vs South feud as much as collecting gold and proving that he is the best. This match has Match Of The Year written all over it and it’s only March. 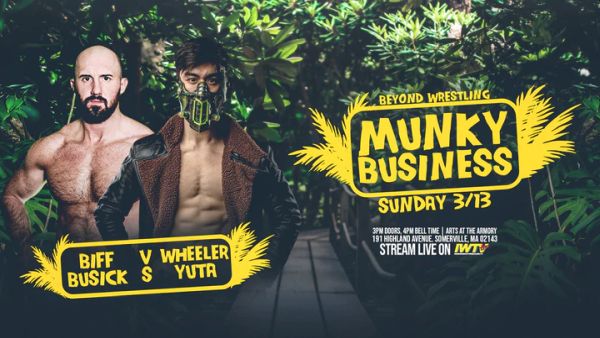 When Biff Busick returned to Beyond Wrestling, it was in a match against Slade that broke down into a bloody brawl. What wrestling fans might not know/remember about Busick is that he is, pound for pound, one of the best technical wrestlers in the world today; this match versus Wheeler YUTA is going to remind everyone of exactly that. Busick returned from the proverbial abyss to remind fans that he could go toe to toe with the toughest out there in a hardcore match, but now, it is time to be reminded of what he is capable of in a pure wrestling sense.

Some might only think of Angel Ortiz as a tag team wrestler. That’s okay because some might also think of Bandido as the true Ring of Honor World Champion. Regardless, this match should be a great technical affair, showing what Ortiz can do on his own and further cementing the legacy of Jonathan Gresham as one of the best technical wrestlers in the world today. Will this lead to an eventual match between LAX and The Foundation? Perhaps, but this singles match is going to be more than worth going out of your way to see.