This week’s edition of NWA Powerrr will be a special one, as it takes a deep dive into the National Wrestling Alliance’s recent event known as NWA PowerrrTrip. This was a monumental event for the National Wrestling Alliance for a number of reasons, chief among them the crowning of a new world titleholder. This event was so big, in fact, that it can’t be contained in one episode. With this in mind, here’s a look at what to expect heading into PowerrrTrip, Part 1, set to debut on FITE at 6:05 PM EST. 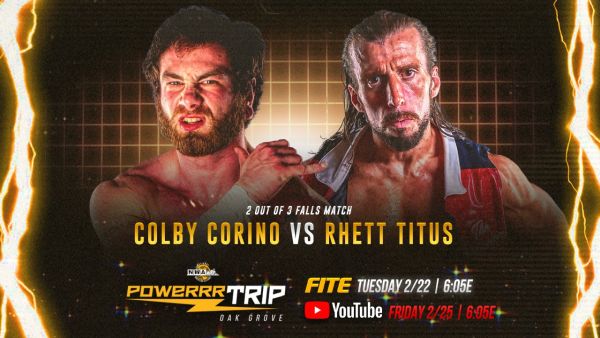 The Last Bastion Battles a Champion

In what will be nothing short of a workhorse match, “The Last Bastion of Professional Wrestling” Colby Corino will go head-to-head with current Ring of Honor World Television Champion Rhett Titus. To be more specific, they will square off in a 2 Out of 3 Falls Match, which sounds promising given the skill sets of both individuals. Despite his brash demeanor, the young Corino has proven himself as a solid talent in various organizations, not just the NWA but H2O Wrestling, Game Changer Wrestling, and elsewhere. Meanwhile, as the current ROH World Television Champion, Titus has developed a reputation as a technically sound athlete, proudly representing ROH as one of its titleholders. See how this 2 Out of 3 Falls encounter unfolds on PowerrrTrip, Part 1.

This week’s NWA Powerrr will also feature a World Women’s Championship match. Kamille, the reigning titleholder, will put “The Burke” on the line against Taryn Terrell. In terms of personalities, the competitors involved couldn’t be any more different. The no-nonsense Kamille is known for her power-based offense, able to use her strength to get the better of various opponents. By comparison, Terrell is craftier, often using mind games to help her get the mental edge over anyone she faces. If one was looking for a title match featuring stark personalities, look no further. It’s important to note that this is the first time the two competitors have met inside of the ring and the fact that it’s for championship gold makes it all the more important. Can Kamille continue her women’s title reign as 2022 rolls on or will the cunning Terrell surprise “The Brickhouse” at PowerrrTrip?