Beyond Wrestling is kicking off their 2022 with Day 91, featuring the return of both LuFisto and Biff Busick. There is considerable hype around this one- and rightfully so- but hopefully the wrestlers can do what they do so well within that ring without Beyond Wrestling trying to further a feud with the wrestling of the South and mainly AC Mack. 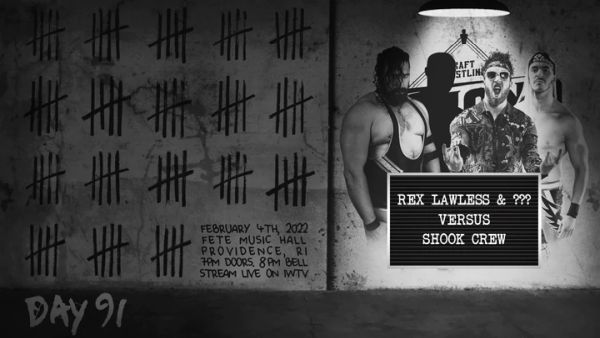 There are several obvious answers as to who could be the mystery partner of Rex Lawless and it mainly will likely just come down to one of two options. This could either be a spot reserved for Willow Nightingale or Mike Verna. There is always the possibility that it could be someone else, but if you were going to take betting odds, those would be the top two picks. The difference between Lawless and whoever ends up teaming with him and Shook Crew is that Shook Crew may have a stronger bond as a tag team, which might work to their advantage. Someone like Ryan Galeone– who doesn’t frequently team with Lawless- could appear here and give that experience advantage to Shook Crew. But, Rex Lawless at least knows what his team is getting into while Shook Crew might not. This is going to be an interesting tag team match, to say the least, at Beyond Wrestling Day 91. 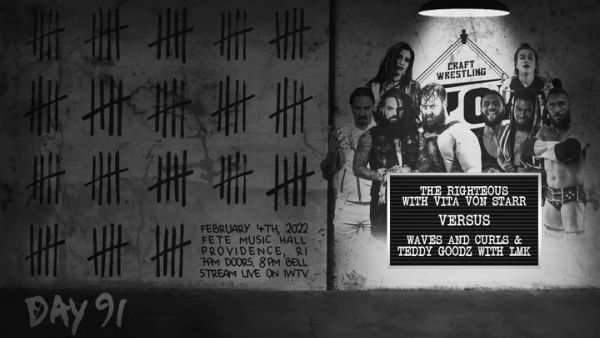 At one point during Uncharted Territory last year, it looked as if some form of this match might happen only with the OGK taking on Teddy Goodz and a partner or two (Ryan Galeone was part of it back then as well) Instead, this somehow comes to a different group of Ring of Honor wrestlers, one which Dan Barry had been fighting, and while this seems like a solid match, it also feels like something for Righteous to do to pass the time before ROH returns. This match at Beyond Wrestling Day 91 should be a lot of fun with who it is to be cheered and booed made fairly clear. At the end of the day, though, where does it really take any of them? 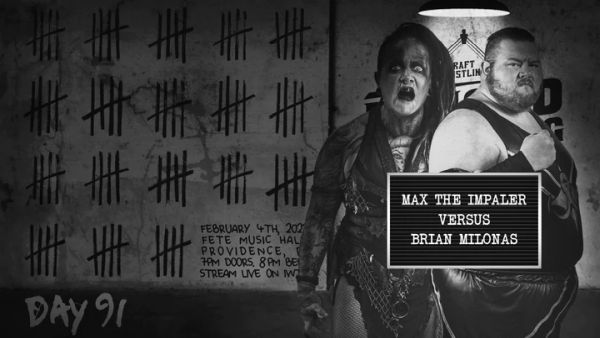 Max The Impaler vs Brian Milonas

A feud that was started in ROH continues into Beyond Wrestling. While it can typically seem like Beyond is focusing too much on picking up the scraps of ROH until they come back, this is one feud that has at least played out during Beyond the same way it might have in ROH. At Heavy Lies the Crown, Max The Impaler was blindsided by Brian Milonas; now, they will go face to face, no sneak attacks involved. Max The Impaler will be seeking some sort of revenge, but they also are used to being the real-life monster in their matches and Milonas is someone who might give them a run for their money in that regard. This match at Beyond Wrestling Day 91 might just break the entire ring. 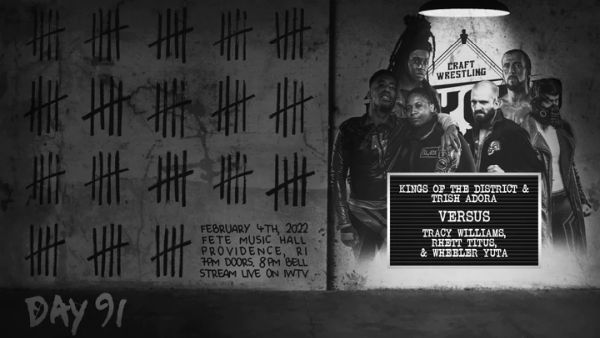 While this should be another technically sound classic wrestling match, the pairing of Trish Adora and the Kings Of The District against what are largely considered to be ROH wrestlers (Though Wheeler YUTA seems to have left there in favor of All Elite Wrestling), it just makes so much of this show feel like “Beyond vs ROH”, which could have more meaning if there was some kind of storyline behind it such as in IMPACT Wrestling right now. It is also worth noting that simply from a Beyond Wrestling standpoint, not all that long ago last year Adora was teaming with Suge D to take on Kings Of The District, so how this trio gets along might come into question. Hopefully, Beyond Wrestling Day 91 becomes the starting point for some stories for all of these characters for this year. 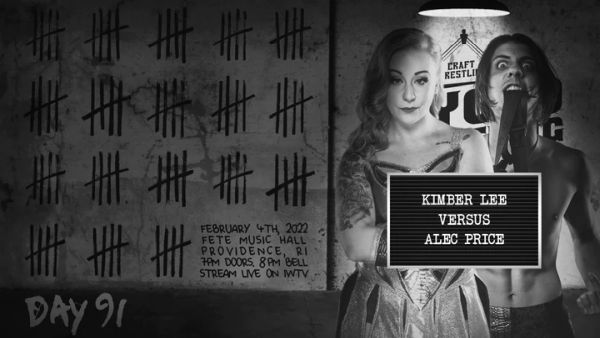 Though it may not really be thought of a lot, Kimber Lee and Alec Price actually have a very similar style. This isn’t the type of match that was really talked about a lot before it was announced, but since being announced, it has become one of the most anticipated matches on the show because of how the skillsets of these two will line up so well together. There is something of a veteran vs younger star quality to this match as well, though at some point, Price has to stop being looked at as the underdog due to his youth because he is the Limitless Wrestling Champion and has big wins. This match could very easily set that trajectory for the rest of 2022 for whoever wins or loses. A win for Alec Price here could also help put him in line for a shot at the Independent Wrestling Championship. 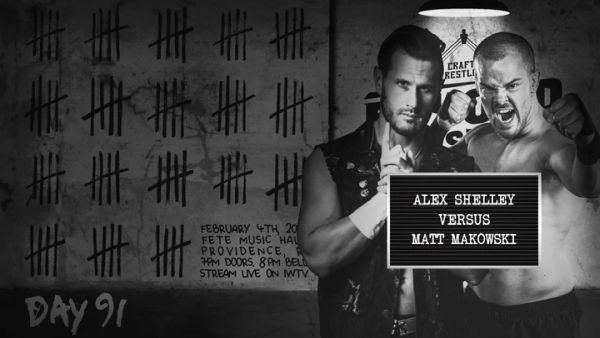 Speaking of the Independent Wrestling Championship, this match was originally supposed to be for that title. When Alex Shelley was announced for this show, he was announced as being the champion, totally overlooking and somewhat disrespectful to AC Mack, who had a title shot prior to this event. Then, this match was announced as a title match as Beyond obviously didn’t learn their lesson, and this just seemed to further enrage AC Mack and fans alike. When Mack won the Independent Wrestling Championship and put a wrench into the works of Beyond Wrestling here, Beyond tried to play the victim card on Twitter, sometimes making it seem as if wrestling wouldn’t exist in New England without them.

This all became a rather awkward situation because, for one, Beyond Wrestling took on a role that would’ve been best suited for a heel. In that regard, even people from New England that tended to support Beyond Wrestling were telling them how bad their takes were and that they should just stop tweeting. At the same time, where does something such as this leave fans in Texas or the West Coast? Do they really care about this North vs South rivalry? Do fans in the North or South even care about it?

All Beyond Wrestling had to do was congratulate AC Mack, apologize for underestimating him, and leave it at that. The fact that this isn’t a title match and Matt Makowski once again gets screwed over and doesn’t get the match he so rightfully deserves, there is no one to blame for that but Beyond. Hopefully, everyone learns from this and moves forward, putting this whole awkward angle behind them, but only time shall tell. This should still be a fantastic match between two great wrestlers and, hopefully, the start to a completely dominant 2022 for Matt Makowski. 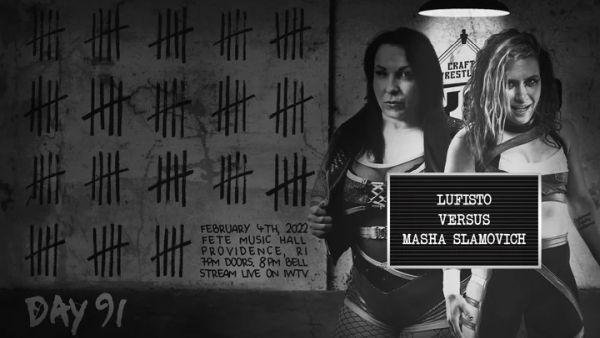 Masha Slamovich seems to be the measuring stick for everyone in Beyond Wrestling and the absolute MVP of Season 3 of Uncharted Territory. With LuFisto finally being able to come back to the United States to wrestle because of the pandemic, it only makes sense for LuFisto to face Slamovich. If anything, her recent appearance in Game Changer Wrestling proved that LuFisto is not only back but perhaps better than ever. While wrestling was booming in the United States, LuFisto had to sit at the border and watch- so close, yet so far away. This just seemed to fuel her in the sense that now she is more determined than ever. This might be the most dangerous we’ve ever seen LuFisto, and if you are not excited for what 2022 shall hold for her, you should be. 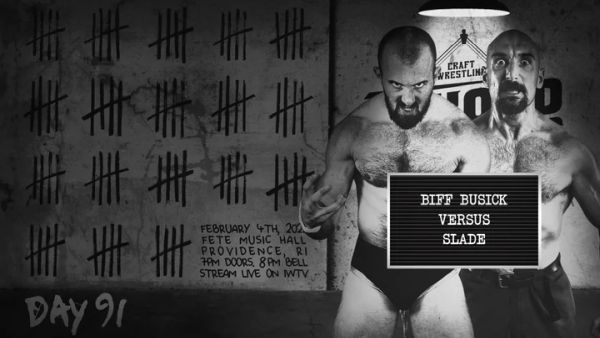 Day 91 is a show named after Biff Busick, and in many ways, he is an example as to why if you are an aspiring wrestler, your end goal does not have to be WWE. Aside from thinking about how Busick was grossly mistreated in WWE, the fact is that he is stepping into a match against one of the most dangerous competitors within not only Beyond Wrestling but perhaps wrestling on a whole and that man is SLADE. There are two types of people in this world when it comes to swimming pools: those who slowly get in, taking their time, and those who just jump right in. This match is the equivalent of Biff Busick jumping back into the pool and it’s going to be a glorious fight. 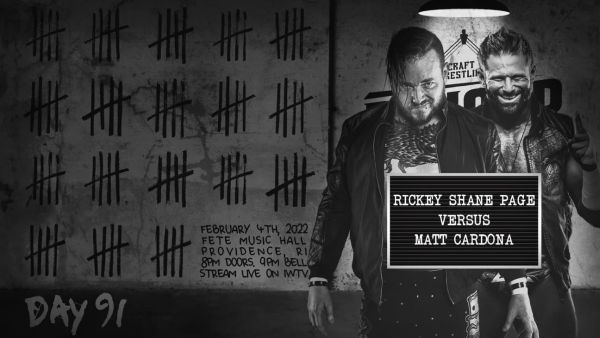 While Matt Cardona has found himself across the ring from several different deathmatch wrestlers, he will now enter a match against Rickey Shane Page and that just seems like a road most wrestlers do not wish to travel down. RSP always seems to have back-up, so if this somehow leads to a multi-person match where Atticus Cogar is across the ring from Swoggle, it will all be worth it. Rather than this turning into a deathmatch, RSP might try to just outwrestle Cardona in a more traditional sense, so this match might showcase a side of RSP that fans don’t typically see. No matter how it breaks down, it just feels as if it’s going to be something special and another must-see match from Matt Cardona!