For the second time, Game Changer Wrestling and Loko Wrestling come together for Fight Club. Their first collaborative event took place this past July, which featured everyone from Loko staples including Gino Medina and Sadika to GCW favorites the likes of AJ Gray, EFFY, and Nick Gage. Though both promotions are known for hardcore wrestling, it’s fair to expect different styles represented this Friday in Houston, Texas. Without any further delay, let’s take a deeper dive into Fight Club 2: Houston – GCW vs Loko Wrestling. 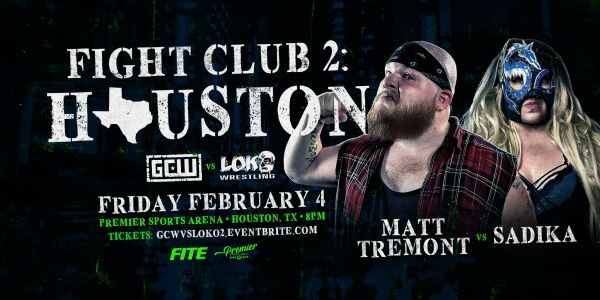 The Inaugural Loko Champion in Action

It wouldn’t feel quite like a Loko Wrestling event if one of the promotion’s top stars, Sadika, wasn’t present. For those that don’t know, the deathmatch powerhouse was the first-ever Loko Champion, though her reign was short-lived, as Dante Leon quickly redeemed his opportunity against the hard-hitting luchadora. She was also part of the first-ever Fight Club event between GCW and Loko, battling GCW World Champion Nick Gage in a losing effort. Sadika intends on hitting the ground running in 2022, taking part in Fight Club 2: Houston. A victory isn’t certain, however, as she’ll be going one-on-one with one-half of the new GCW Tag Team Champions.

Last month, at GCW’s Hammerstein Ballroom debut show, The WRLD on GCW, Matt Tremont and Nick Gage answered The Briscoe Brothers’ open challenge for the tag team titles. In what was, admittedly, a shorter encounter than expected, Tremont and Gage ended the night as the new GCW Tag Team Champions. Longtime independent wrestling fans will best know this duo as The New H8 Club; members of the original group included Wifebeater and the late Nate Hatred and Justice Pain. This Friday, Tremont will be stepping into the Premier Sports Arena alone to battle Sadika in a first-time encounter. See who emerges victorious at Fight Club 2: Houston. 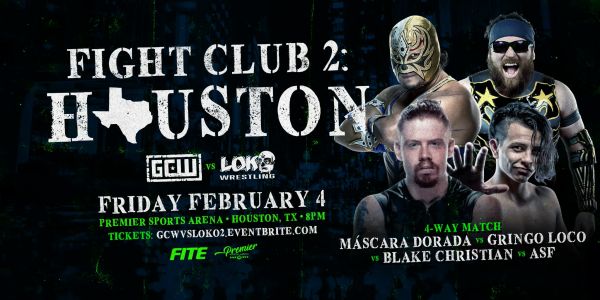 Speaking of lucha libre action, at Fight Club 2: Houston, Máscara Dorada makes his Game Changer Wrestling debut. WWE fans may better know this wrestler under the name Gran Metalik, where he was a standout in the Cruiserweight Classic in 2016. From 205 Live to Monday Night Raw, he competed on various brands before his release this past November. However, Dorada’s career is far more extensive, dating back to 2005. New Japan Pro-Wrestling and Consejo Mundial de Lucha Libre (CMLL) were the two promotions he became synonymous with, even becoming a record-setting 4x CMLL World Welterweight Champion. Simply put, expectations are high for “The King of the Ropes” heading into Fight Club 2.

Given his competition this Friday, a victory won’t come easily for Dorada. He will enter a four-way match also featuring ASF, Gringo Loco, and Blake Christian, the latter of whom has made it no secret that he’s aiming for the Ring of Honor World Championship. Keep in mind that Christian was slated to face ROH world titleholder Jonathan Gresham at The WRLD on GCW last month before the champion’s positive COVID-19 diagnosis. Throw in the added high-flying elements of ASF and Loco and it’s fair to say that this match will possess a lucha libre flair. If prior lucha matches in GCW are indicative, this has the potential to steal the show. 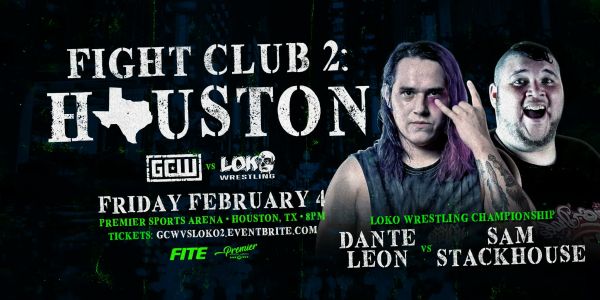 The Loko Wrestling Championship Will Be Defended

No event affiliated with Loko Wrestling would be truly complete without its top champion in action. Dante Leon, the current reigning Loko Champion, will be defending the gold against Sam Stackhouse. As mentioned earlier, Leon won the title from Sadika and has held onto it ever since. He’s had 2 successful title defenses so far, one on GCW territory and the other on home promotion terrain. Known as “The Endseeker,” Leon possesses an alternative look and a propensity to take to the skies. Given the fact that he learned under Seth Rollins, this should come as no surprise. If Leon is the embodiment of fast-paced offense, his Fight Club 2: Houston opponent is nothing short of a stark contrast.

He may be known by recent GCW fans as the man that nearly crushed Swoggle at The WRLD on GCW, but make no mistake: Sam Stackhouse isn’t a competitor to take lightly. Stackhouse’s appearance is that of a super heavyweight, able to pull off maneuvers one would associate with his body type. However, he can stun opponents with his agility, even executing moonsaults with little effort. He made his Loko Wrestling debut earlier this month, and in his second match affiliated with the promotion, he’ll be competing for the top prize. Between the swiftness of the champion and the brute strength of the challenger, which will win out? Find out this Friday at Fight Club 2: Houston – GCW vs Loko Wrestling.

Stay tuned to the Last Word on Pro Wrestling for more on this and other stories from around the world of wrestling, as they develop. You can always count on LWOPW to be on top of the major news in the wrestling world, as well as to provide you with analysis, previews, videos, interviews, and editorials on the wrestling world. Fight Club 2: Houston – GCW vs Loko Wrestling is set to air Friday at 8 PM CST on FITE. Tickets are also available via Eventbrite.