This Friday, Game Changer Wrestling partners with Loko Wrestling to bring Fight Club Houston to the Texas area. GCW is an independent promotion that needs no introduction. Bringing together a cacophony of in-ring styles, from deathmatch to lucha libre, there is very little that the promotion in question leaves by the wayside. Its top champion, Nick Gage, is also its working-class hero. Furthermore, he’s fast approaching his impending title match with Matt Cardona at GCW Homecoming. Not unlike his recent title match against Mance Warner at Outlaw Mudshow, however, “The King of Ultraviolence” needs to keep his eyes on the task ahead.

Loko Wrestling, on the other hand, is a new promotion that formed last year. Based in Houston, Texas, Loko is a lucha-based “crazy as f**k” independent organization with something to prove. In their words, “if it ain’t Loko, it ain’t fire.” The company held its first event, Loko Reggie Jackson’s House Of Horrors, this past October. The show featured such names as Gino Medina, Laredo Kid, and Hernandez. When stars that have passed through Loko meet the established faces of GCW, expect nothing short of chaos. Here is what viewers should know heading into Fight Club Houston: GCW vs Loko Wrestling. 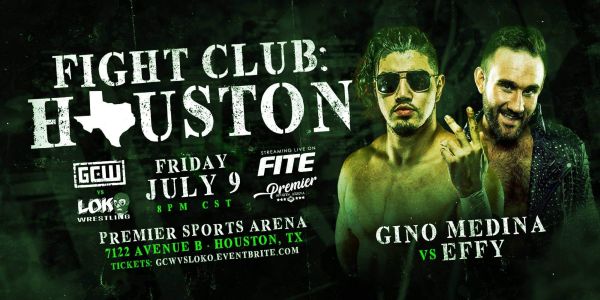 Wrestling fans may be familiar with Gino Medina during his time in Major League Wrestling. He joined MLW in late 2019 before aligning himself with The Dynasty, one of the promotion’s most successful factions. However, it may surprise fans to know that Medina has wrestled multiple matches for Loko Wrestling this year. He worked such matches as the one he had against Psycho Clown, a Mexican wrestling veteran, this past January. This Friday, “The Latin Heartthrob” will appear for Fight Club Houston to take on an independent wrestling sensation he has yet to cross paths with – EFFY.

If there’s anything that can be said about EFFY, it’s that he isn’t afraid to tackle any challenge. His involvement in the Tournament of Survival 666, which took place last month, is evidence of this. Unlike Medina, EFFY has no experience in Loko Wrestling, though this shouldn’t be a point of contention for “The Weapon of Sass Destruction.” EFFY’s in-ring approach can best be described as that of a brawler; this should make his upcoming bout with Medina, whose style is rooted in lucha libre, incredibly interesting. This will be one of the matches to keep an especially close eye on come Fight Club Houston. 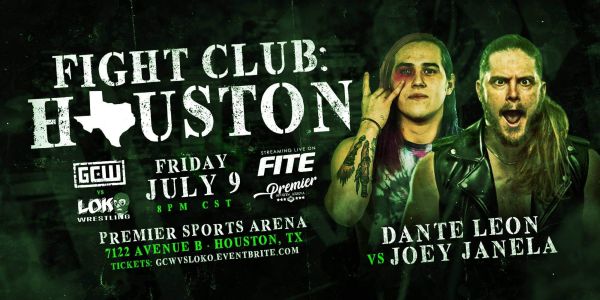 Dante Leon is one of the most unique standouts on the independent wrestling scene today. Leon is a graduate of The Black & The Brave Wrestling Academy, headed by Marek Brave and current WWE Superstar Seth Rollins. “The Endseeker” made his professional debut in mid-2016 and has only gained momentum from there. His most recent GCW appearance took place at Zombie Walk, where he lost to Jordan Oliver in a valiant effort. Despite his loss, Leon’s time in GCW continues as he heads into the promotion’s Loko Wrestling crosspromotional event, Fight Club Houston. It’s where he will set his sights on “The Bad Boy,” facing him for the very first time.

Moving away from commentary and into the ring, Joey Janela will work his first match under the Loko Wrestling banner at Fight Club Houston. As a regular performer in All Elite Wrestling, oftentimes AEW Dark and Dark: Elevation, Janela isn’t one to turn down a GCW appearance. His last official match for the promotion took place at Draft Day, this past May, where he defeated Allie Katch. “The Bad Boy” is a wrestler known for taking things to the extreme if need be, which makes him the perfect opponent for Dante Leon heading into the Premier Sports Arena this Friday. 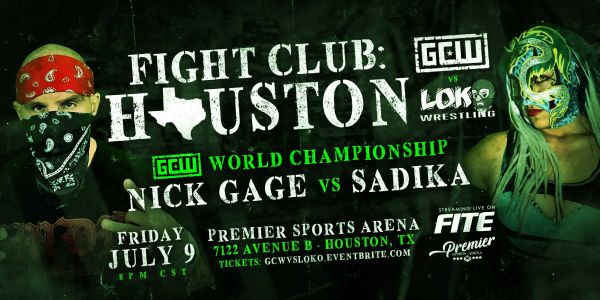 A Deathmatch Encounter With Lucha Flair

In the main event of Fight Club Houston, Nick Gage will defend the GCW World Championship against Sadika. As stated earlier, Gage has had his hands full courtesy of Matt Cardona. Their long-standing history began innocently enough until matters escalated to the point where multiple physical confrontations took place. This wasn’t to say that “The King of Ultraviolence” kept his eyes off the proverbial prize. Gage remains the undisputed top champion in Game Changer Wrestling. However, as he enters Fight Club Houston, he will have to readjust his focus to take on a competitor he’s facing for the first time.

Sadika brings with her, to this match, over a decade of experience. Fans of Mexican wrestling may be familiar with her work in such locations as Lucha Libre Femenil and International Wrestling Revolution Group. She even worked for Consejo Mundial De Lucha Libre, which has been arguably her largest platform to date. Recently, however, “La Sexy Extrema” has been making her rounds across Texas indie promotions. In Loko Wrestling alone, she’s competed in Dog Collar and Ambulance Matches alike, showcasing just how willing she is to take things to the extreme. One may consider her a Loko mainstay. In North America, her upcoming GCW World title match against Nick Gage is her most important yet. Expect a mix of styles without deathmatch wrestling being compromised at Fight Club Houston.

Stay tuned to the Last Word on Pro Wrestling for more on this and other stories from around the world of wrestling, as they develop. You can always count on LWOPW to be on top of the major news in the wrestling world, as well as to provide you with analysis, previews, videos, interviews, and editorials on the wrestling world. Fight Club Houston: GCW vs Loko Wrestling is set to air Friday at 8 PM CST on FITE. Tickets for the event are also available via Eventbrite.