ChocoPro #198 marks the Season 11 Finale of Gatoh Move Pro Wrestling’s long-running YouTube wrestling show. To say that it has been quite a ride would be an understatement, featuring everything from the return of Mei Suruga following her excursion to America to continued vying for the promotion’s championships. This weekend, Season 11 wraps up and it will do so in a major way. Here’s what to expect when the show airs live on the official Gatoh Move YouTube channel. 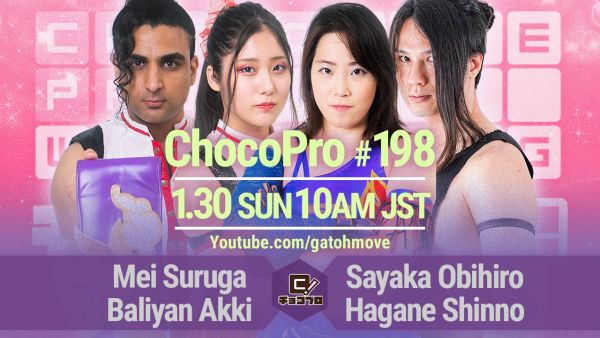 To say that Baliyan Akki has had an eventful 24 hours would be an understatement. On the previous episode of ChocoPro, Akki challenged for the Interim Super Asia Championship, taking on veteran Chon Shiryu. Akki’s road toward singles gold has been paved with one obstacle after another, as he was seemingly unable to realize his destiny. However, on this show, the self-proclaimed “Ace” of ChocoPro rose to the occasion, becoming the new Interim Super Asia Champion in the process. One of the people that congratulated him was fellow Asia Dream tag team titleholder, Mei Suruga, who embraced him following this monumental victory.

On ChocoPro #198, it’s back to tag team action as Best Bros face a formidable duo in Sayaka Obihiro and Hagane Shinnou. This is a rematch from Episode #194, where the two teams competed against one another. In this nontitle encounter, it was Best Bros that emerged victorious. However, this is the Season 11 Finale and it’s fair to assume that anything can happen. A victory over Obihiro and Shinnou could very well put them in contention for the Asia Dream Tag Team Championship in Season 12. Now a double champion, Akki teams with Suruga to ensure that their position atop the proverbial tag team mountain remains theirs.

In the ChocoPro Season 11 main event, “Too Much Energy” Chie Koishikawa takes on the wily, oftentimes chaotic veteran, Kaori Yoneyama. This isn’t their first singles encounter – they’ve faced off, one-on-one, on two other occasions – but it’s fair to say that this will be the most important. For those that remember, during the 2021 Sakura Awards, Koishikawa was given the Expectation Award by Emi Sakura. This was recognition that Sakura saw potential in “Chiezo,” desiring her to realize said potential in 2022. Koishikawa declared that she would do her best, though the first month of the year has been left with scattered results.

As of this writing, Koishikawa has wrestled 9 matches in Gatoh Move, losing every single one. This doesn’t even begin to touch upon her poor luck in the post-match janken tournaments, which gave rise to the meme-esque “Chie Flop.” This isn’t to say that Koishikawa hasn’t broadened her horizons in wrestling, as evidenced by her participation in a Ganbare Pro event earlier this month. However, when looking at the bigger picture, it’s fair to say that 2022 didn’t begin the way that the endless energetic fencer anticipated. The Season 11 Finale of ChocoPro is her opportunity to cap things off on a high note.

To do so, however, Koishikawa will have to overcome the veteran wiles of Yoneyama, whose impact on Gatoh Move can’t be ignored. She has been a vital part of the organization since its early years, aiding longtime tag team partner and friend Sakura in building said organization from the ground up. Given that they’ve held tag team gold in multiple companies throughout the years, this sense of loyalty should come as no surprise. It’s only fitting, then, that Yoneyama main event the season finale episode, ChocoPro #198. Expect nothing short of a lively match between these two competitors.