Wrapping up this weekend, Gatoh Move Pro Wrestling is set to present ChocoPro #196. We are only two episodes away from the Season 11 Finale and based on how the action has steadily been ramping up, it’s fair to say that the Gatoh Move crew is looking to end things with a bang. On this upcoming show, fans will see the Super Asia Interim Champion in action, Mei Suruga and Tokiko Kirihara taking on one another in rare singles competition, and more. Take a look at all the action to expect. 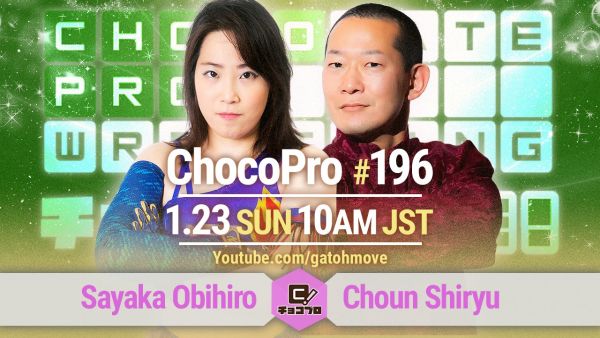 In non-title competition, Super Asia Interim Champion Chon Shiryu will be taking on “The Blue Heart” of Gatoh Move, Sayaka Obihiro. Since being crowned the interim titleholder this past November, Shiryu has had a more consistent presence on the show, competing in a variety of matches and often emerging victorious. “The Dragon’s” output, from a bell-to-bell standpoint, has increased, making him one of the most formidable wrestlers to step foot inside Ichigaya Chocolate Square. With the original Super Asia Champion, Minoru Fujita, still looming, an encounter between champions is all but guaranteed.

Meanwhile, Obihiro will be heading into ChocoPro #196 with one goal in mind: to win. This is especially true given that her last victory took place on Episode #187 last month; even though her matches since then have been strong from a match quality perspective, “Obi-san” struggled to have her arm raised. The Super Asia Interim Champion is as big of a challenge as any for Obihiro; with her veteran status and sheer wealth of experience, she will be more than ready for the task. Whether she comes out of this match with another win on her record remains to be seen. 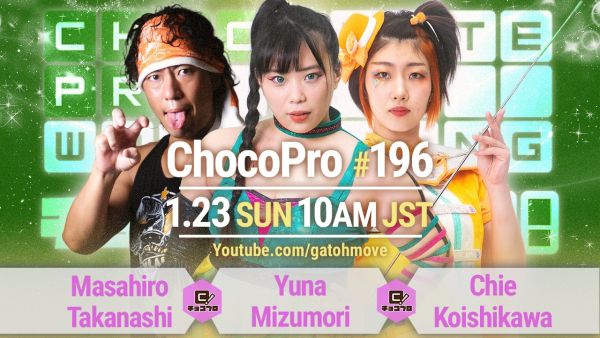 In three-way action, “Too Much Energy” Chie Koishikawa takes on Super Asia title contenders Yuna Mizumori and Masahiro Takanashi. On the previous episode, Takanashi will have faced Shiryu for the title in question, their history well-known by long-time Japanese wrestling fans. Also in the title mix was “Yunamon,” who’s never been shy about declaring why she should be the one holding the blue belt. Given their individual accomplishments, Takanashi and Mizumori have all the reason in the world to be competing for the Super Asia Championship. A relative rookie by comparison, Koishikawa is very much the odd competitor out.

In fact, one of the prevailing stories through ChocoPro Season 11 has been the struggles of “Chiezo” who, despite her best efforts, often came out of her matches on the losing end. In fact, of the 14 matches throughout the season she’s wrestled so far, she’s only won 3. This isn’t to take away from her work ethic, however, as her undying passion continues to resonate with viewers of the show. A victory on ChocoPro #196 would be invaluable for Koishikawa. Not only would it grant her another win but she could make a claim for Super Asia title contendership as well. This will be another match to keep an eye on.

In a rare singles match for both contenders, Mei Suruga and Tokiko Kirihara will square off on ChocoPro #196. Both Suruga and Kirihara are known for competing in tag team and multi-person matches alike. As longtime fans of the show will know, “Mei-chan” teams with Baliyan Akki as Best Bros; together, they are the Asia Dream Tag Team Champions. Meanwhile, “Otoki-san” has been occupied in various match types, whether fighting for herself or teaming with such individuals as Black/White Comaneci teammate Antonio Honda. Readjusting for singles action is the main challenge that Suruga and Kirihara must overcome heading into this match.

It’s worth noting that this is far from the only singles match that Suruga and Kirihara have had. Even before ChocoPro came to fruition in early 2020, they’ve tested their mettle against each other on different occasions. In fact, as “Otoki” was just starting to wrestle in the summer of 2019, she wrestled multiple exhibitions against “The Apple Girl.” Over the years, both wrestlers evolved, honing their contrasting styles in the process. Though Suruga’s fast-paced and wily approach has led her to success in Gatoh Move and elsewhere, the martial arts and submission-based style of Kirihara can’t be overlooked. Who will emerge the winner in this main event match?