Today, January 2, 2022, marks the five-year anniversary of The KO Show, which is a celebrated product of WWE’s finest wrestlers, Kevin Owens. What started as an interview segment back in 2017 has now transformed into a talk show that brings about a spark of energy and intrigue in WWE’s monotonous weekly wrestling. Apart from being a showcase of Kevin Owens’s brilliant mic skills and bold persona, The Kevin Owens Show also succeeded in accelerating the momentum of existing storylines as well as in creating new impactful ones. As we look back at all the entertaining moments that The KO Show has put forward in the past years, let’s take a glance at what makes it this important, and what drives it forward in the near future.

There’s no doubt that The KO Show was an element that had stuck with Owens’s gimmick since his earliest times at WWE. But it was Mick Foley, who coined the term as a legitimate talk show/interview segment on Monday Night Raw and Friday Night SmackDown. On January 2, 2017’s edition of Raw, the show kicked off with an announcement from Foley and Stephanie McMahon. While Stephanie focused more on the freshly initiated inter-brand rivalry, “The Hardcore Legend” turned his attention towards the-then WWE Universal Champion, Kevin Owens.

With a match against challenger Roman Reigns slated for the upcoming Royal Rumble, KO had a lot on his mind. And Foley came in the form of an angel; with his intentions fairly balanced between what would be better and worse for the duo of Jeri-KO. While he officially announced and hyped the arrival of The KO Show, the first guest was declared to be none other than the title-seeking veteran, Goldberg. As for Jericho, Stephanie provided him with an opportunity to conquer Reigns’s United States Championship on the same night. 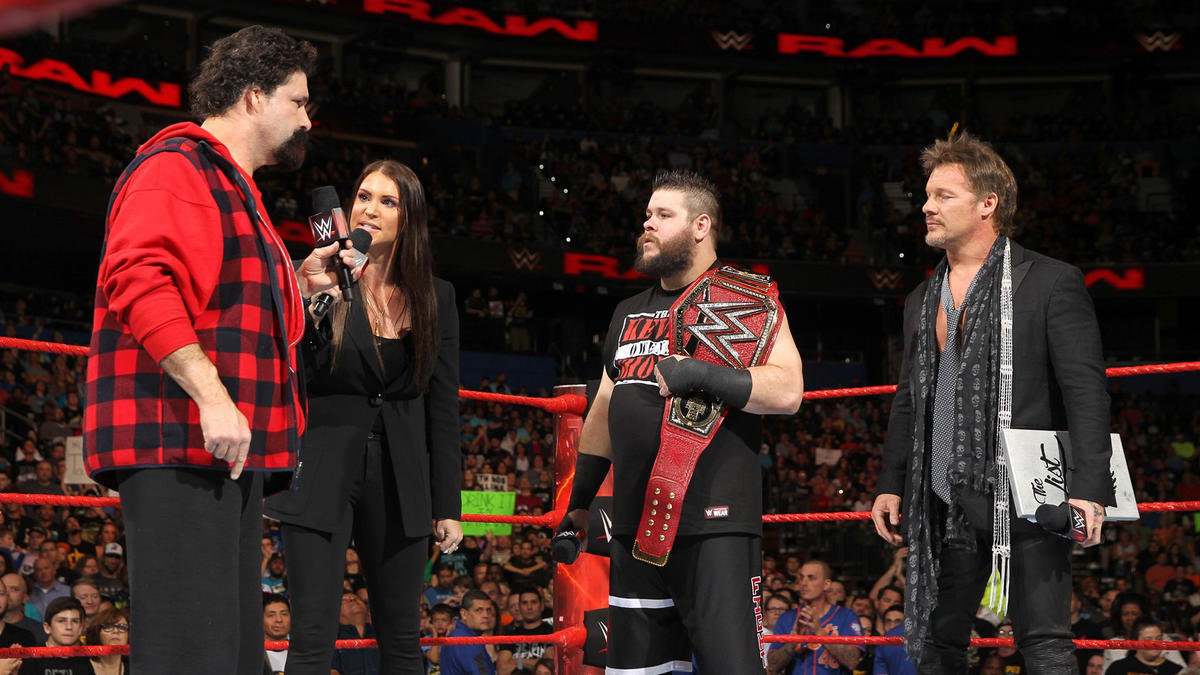 The Amalie Arena in Tampa, Florida was treated with a decent edition of Raw. Several matches were stacked with the likes of Seth Rollins, Chris Jericho, Braun Strowman, Rusev, Bayley, Cesaro, and many others competing inside the ring for the night. Following the announcements by Foley and Stephanie, KO wrestled Rollins in a one-on-one match for a chance to be at ringside during his pal’s match against Reigns later that night. However, for an unlucky Owens, his anger got the better of him resulting in a disqualification. What followed was the subsequent beating of a battered Rollins.

Jericho wasn’t particularly lucky, either. Losing the support of his friend from the ringside during a crucial bout didn’t help him much. Despite putting up an incredible display of his vast wrestling arsenal, Jericho blew his shot at the U.S. title.

The heartbroken duo of Jeri-KO now looked forward to the only positive left on the show. Monday Night Raw was not going to go down with main event wrestling. Instead, the debut edition of Owens’s show was under the spotlight. The stage (ring) was set, with a table and chairs for the hosts and the guest. Plus some posters and banners with “The KO Show” written boldly across them. Before the inaugural guest would even make his entrance, Jericho declared that he had an extremely special announcement. An announcement for the WWE Universe that would add greatness to the KO Show’s debut. What followed was Jericho’s revelation of the number 3 entrant in the Royal Rumble, which was none other than himself.

Even though Owens tried to reason him, the former was not paying heed. He was convinced that no matter what happened at the Rumble or at WrestleMania, the Universal Championship will stay with either halves of Jeri-KO. As the altercation continued, hit the legendary Goldberg’s thunderous entrance theme. Amongst a strong approval from the fans and his beatdown of Brock Lesnar at Survivor Series, a confident Goldberg threw chairs around, established his dominance in the ring, and shut the duo of Jeri-KO. When Owens took to the mic to counter him, the voice of Paul Heyman clamored through the arena, teasing the return of Lesnar.

“The Beast Incarnate,” however, was not actually present, but Heyman tried to hype up his performance at the Royal Rumble. It took a furious Goldberg to stop him dead in his tracks. He also shut Owens by comparing him with Roman Reigns and discarding them as unworthy opponents. To this, “The Big Dog” made his entrance and looked eye to eye with Goldberg. Nobody moved an inch as the two locked eyes and threw shots at each other, amidst the audience’s approval. Finally arrived the “The Monster Among Men,” Braun Strowman, who didn’t receive a fair chance to speak. It wasn’t late before he succumbed to an iconic Double Spear by Reigns and Goldberg.

With all of this action, the debut installment of The KO Show came to an end. Although the hosts didn’t get much of the screen time, the segment truly served its purpose. It not only put Owens forward as the Universal Champion but also added momentum to several different storylines. Beginning with Jericho’s astonishing revelation, the segment took care of the unfinished business between Lesnar and Goldberg. All of this while bringing forward a new rivalry between Reigns and Strowman that would stay under the limelight for quite some time.

FUTURE EDITIONS OF THE KO SHOW

Post the explosive debut edition of The KO Show, Kevin Owens returned after a prolonged duration on April 23, 2018. This time, he had collaborated with his friend from the WWE’s blue brand, Sami Zayn. The show was renamed The Sami and Kevin Show and the influence of this duo was clearly seen on Raw. Their first guest was then General Manager, Kurt Angle.

In the future editions of The KO Show, guests ranged from Jinder Mahal, Elias, Becky Lynch, and Charlotte Flair to The New Day, Randy Orton and AJ Styles, Shane McMahon, and Drew McIntyre, Lio Rush, and many others. A majority of these shows ended in chaos; an element that KO is no stranger to.

While WWE turned to the ThunderDome during the pandemic, it was The KO Show that lightened our days with humor and pandemonium. The likes of Sasha Banks, Bayley, Andrade, Angel Garzia, Zelina Vega, Braun Strowman, and Dabba-Kato also graced this segment in the ThunderDome. The latest editions even involved Logan Paul alongside Baron Corbin.

In all these years, The KO Show has always been viewed as a noteworthy pro-wrestling segment that can check multiple boxes all at once. Kevin Owens has already proved that his wrestling abilities are not restricted to his in-ring madness. But they also involve his talents while holding the microphone. From delivering strong promos to talking down certain guests, Owens has done it all. This adds a special touch to his show. Additionally, The KO Show barely ends peacefully for both parties makes it all more exciting for pro-wrestling fans. We hope to see more of The KO Show in the years to follow; as a means to provide us with relief from the regular fighting schtick and as a source of light-hearted humor.