Now that 2022 has officially been rung in, Gatoh Move Pro Wrestling is set to write another chapter in the book of ChocoPro. Enter Episode #189, which will see two promising tag team encounters take place. One of these encounters features two Gatoh Move titleholders joining forces. What should viewers expect on ChocoPro #189? All of the action will unfold on the official Gatoh Move YouTube channel, so be sure to tune in live. Prior to this, however, let’s run down the action that’s set to take place. 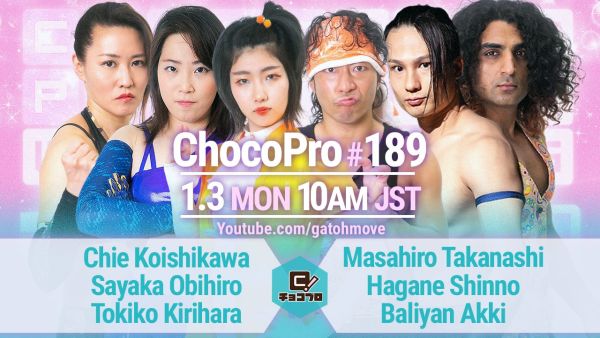 In a major 6-person tag team match, 3 of Gatoh Move’s joshi competitors clash with 3 men’s wrestlers, one of the latter being one-half of the Asia Dream Tag Team Champions. Fourth-generation Gatoh Move stars Chie Koishikawa and Tokiko Kirihara team up with veteran Sayaka Obihiro to battle the trio of Masahiro Takanashi, Hagane Shinnou, and Baliyan Akki. There are multiple elements at play on the surface, among these being both members of Egg Tarts, Koishikawa and Shinnou, on opposing teams. This isn’t the first time this has occurred, but it will be interesting to see what unfolds if they clash.

It’s also worth noting that Akki has been seeing somewhat scattered luck as of late. On the previous episode of ChocoPro, Best Bros were successful against Koishikawa and Obihiro in a non-title contest. The episode prior to that, however, Best Bros defended the Asia Dream tag team titles against Calamari Drunken Kings to a 30-minute draw. This meant that Akki and Mei Suruga held onto their titles, but the latter was clearly frustrated with the fact that they couldn’t secure the victory. With different elements at play, this upcoming encounter on ChocoPro #189 will be one to keep an eye on.

The main event of ChocoPro #189, as mentioned earlier, will see two titleholders teaming up. The other half of the Asia Dream Tag Team Champions, Mei Suruga, joins forces with Super Asia Champion Minoru Fujita to take on the duo of Antonio Honda and Chris Brookes. Much like Egg Tarts being on opposing teams, this isn’t the first time that Suruga and Fujita joined forces. Think back all the way to Episode #15 in May 2020; on this show, they were successful against the duo of Honda and Tokiko Kirihara. Now, over a year and a half later – not to mention with gold in their possession – “Mei-chan” and the bird mask-wearing deathmatch enthusiast face a great challenge.

It would be fair to call Antonio Honda and Chris Brookes two of the more recognizable faces in DDT Pro-Wrestling. They are also among the company’s most successful. Honda has held most of the company’s titles on different occasions. Meanwhile, Brookes holds the honor of being the first DDT Universal Champion, holding said title twice throughout his career. When they step into Ichigaya Chocolate Square, they are tough to beat. Such is true whether they’re teaming up or involved in separate singles competition; this should be no different come ChocoPro #189. However, given the caliber of opponents they’re set to face, they should remain focused on the match at hand.