Ice Ribbon is set to hold its final show of the year with RibbonMania 2021 in Korakuen Hall. This major event will feature three titles on the line. 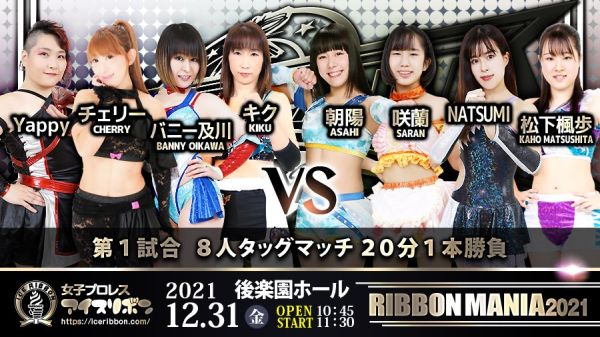 RibbonMania 2021 kicks off with a big eight-woman tag match featuring some of the rookies of Ice Ribbon. After the large exodus of talent a few weeks ago, there’s a big opportunity for these wrestlers to really step it up going into the New Year and prove themselves to be reliable assets for the company. It won’t matter too much who wins in this match but it will be interesting to see the future of Ice Ribbon showcase their skills. 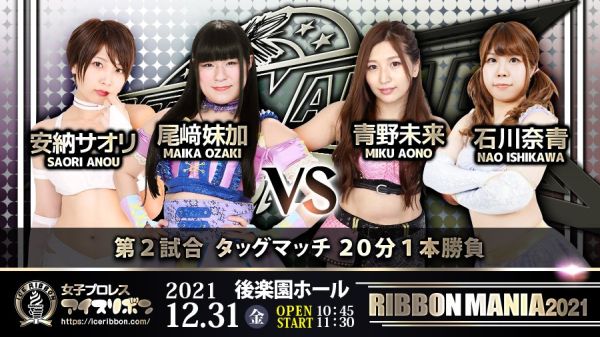 Saori Anou returns to Ice Ribbon alongside RebelxEnemy’s Maika Ozaki to take on the team of Miku Aono and Nao Ishikawa. Aono and Ishikawa have proven themselves as a tag team, recently challenging for the International Ribbon tag titles. Despite coming out on the losing end, they have proven their worth in the company as a tag team. Anou has picked up several wins as a singles wrestler in the company since she started making more regular appearances there. Teaming with the current Triangle Ribbon Champion in Ozaki, Anou will surely pick up the victory. 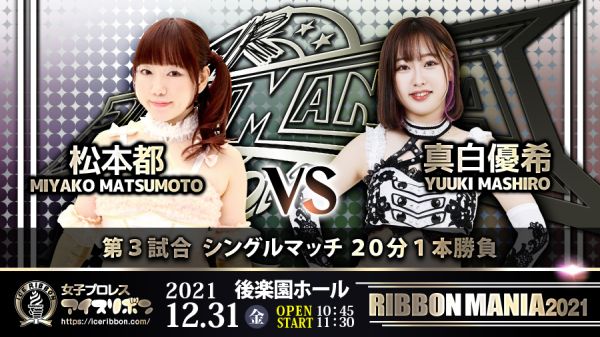 Two of the strangest women in wrestling will go head to head in what could vaguely be described as a wrestling match. These two are known for their outlandish styles, and while they both can put on a good wrestling match, their strengths lie in the more comedic aspect. Miyako Matsumoto could be seen as what Yuuki Mashiro may eventually become one day. They might not get to show their wrestling skills, but this is going to be the most entertaining match on the card. 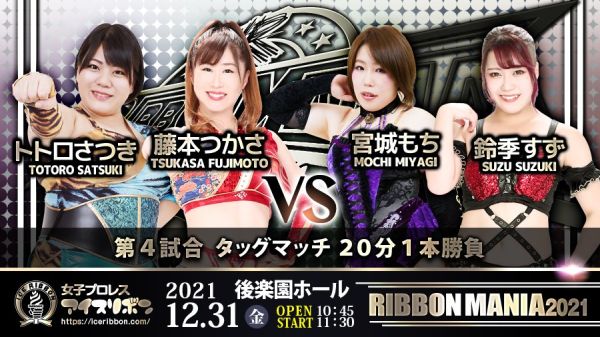 Prominence members Mochi Miyagi and Suzu Suzuki will be teaming up to take on Totoro Satsuki and Tsukasa Fujimoto before they both dive into the world of deathmatch wrestling in the new year. Miyagi and Suzuki have teamed up before and came out on the winning end, so it does look good but going against the ace, Tsukasa Fujimoto, isn’t easy. Despite losing the ICExInfinity Championship this past November, Fujimoto continues to prove, in every match, why she is the ace of the company and will undoubtedly put on a great match. It’s not clear who will win, but there are not many stakes in this, so it’ll just be fun to watch. 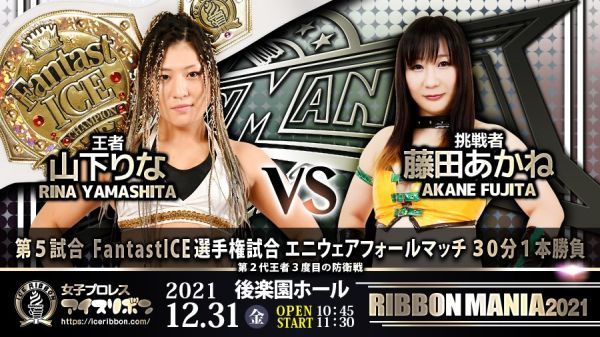 Akane Fujita is another name joining the deathmatch group Prominence in the New Year, and this is a perfect match-up to show people just what she can do against one of the best freelancers. Rina Yamashita recently went on a short excursion to the U.S. to work with Game Changer Wrestling in the Nick Gage Invitational, putting her name out to an international audience. If the international audience translates to this, Fujita will definitely gain some much-deserved attention. This will be another great match between these two, and there is the possibility that Fujita could be a double champion heading into 2022. 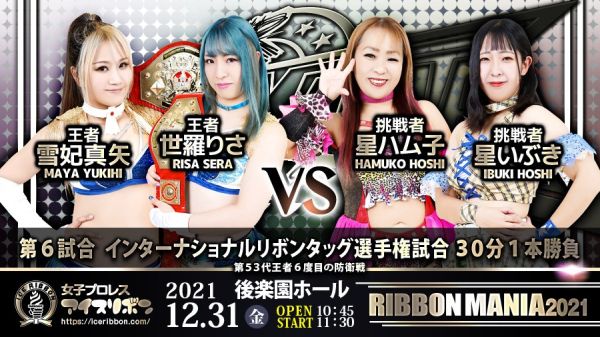 The quest for more defenses continues for Risa Sera and Maya Yukihi as they go up against another strong team in the mother-daughter duo of Hamuko and Ibuki Hoshi. With Yukihi going freelance and Sera being one of the driving forces behind Prominence, they certainly have a lot on their plate to keep the titles. Meanwhile, it seems like Hamuko and Ibushi are fighting not only for the titles but for the titles to stay in Ice Ribbon. Since Ibuki has been stepping up now more than ever, with her amazing chop battle against the former champion Fujimoto, she is one to watch going into 2022, and that will solidify that even more if she manages to capture the International Ribbon Tag Team Championship. It’s hard to tell who will win, since Ice Ribbon isn’t too keen on many freelancers holding their titles, but who knows how long we will have Azure Revolution around as a tag team?

The RibbonMania 2021 main event sees Tsukushi Haruka defending the ICExInfinity Championship against 666’s RebelxEnemy member Ram Kaicho. Although Kaicho is no stranger to holding titles in Ice Ribbon, this is the first time that she is challenging for the ICExInfinity title. Kaicho is somewhat of a hidden treasure when it comes to wrestling. Despite her size, she makes herself look believable against anyone with her years of experience under her belt. Haruka and Kaicho have faced off in tag matches that turned out to be exciting, so this is certainly worthy of being a main event for Korakuen Hall. Even though Kaicho is an incredible wrestler, it doesn’t seem like Haruka will be losing her championship anytime soon.