The GCW Nick Gage Invitational 6 marks the latest entry in one of Game Changer Wrestling’s most brutal, hard-hitting tournaments. Essentially, this is where some of the toughest competitors come to test their mettle, showing just how far they’re willing to go to not only receive bragging rights but potentially earn championship gold down the road. This year’s NGI should prove to be no less grueling, featuring not only returning combatants but newcomers as well. With this information in mind, here’s what to expect this Saturday, whether you plan on attending live or watching at home. 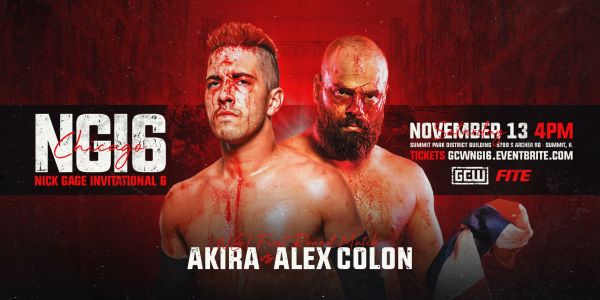 The first announced Nick Gage Invitational 6 match stems from events that transpired this past October. At GCW Fight Club on the 9th, the team of G-Raver, AKIRA, and Alex Colon fell shirt in their six-man tag team match against AJ Gray, Mance Warner, and Matthew Justice of Second Gear Crew. The evening after, at GCW The Aftermath, Colon bested Atticus Cogar in a hellacious deathmatch main event. Post-match, AKIRA made his way to the ring to confront a beaten, battered Colon, setting the stage for the NGI6. In terms of tournament experience, Colon has the edge over “The Death Samurai” from Indiana. Keep in mind that Colon is the only 3-time Tournament of Survival winner. He’s also competed in 3 NGI tournaments, though he has yet to win one. The NGI6 marks AKIRA’s GCW tournament debut and there is perhaps no more formidable opponent to make a first impression against than Colon. 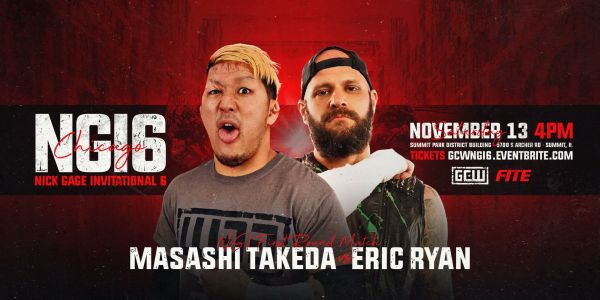 As the current reigning GCW Ultraviolent Champion, there is perhaps no wrestler with as much of an edge heading into the Nick Gage Invitational 6 than Masashi Takeda. He won the title from Drew Parker late last month at a Big Japan Pro-Wrestling event before traveling stateside with the title in tow. This Saturday, Takeda makes his second-ever Nick Gage Invitational appearance, having won the NGI3 back in 2018. Simply put, this makes Takeda all the more formidable. Japan’s “Crazy Kid” is set to take on Eric Ryan, “The King of the Deathmatches” from Cleveland, Ohio. It’s not as if this title is unwarranted, however; he won the IWA Mid-South tournament of the same name this past July. Furthermore, he competed in the NGI4 in 2019, though he failed to advance past his initial match. Needless to say, Ryan will be looking to redeem himself. However, this may be easier said than done against a competitor with the credentials Takeda possesses. It’s also worth noting that Takeda will be defending the Ultraviolent title throughout the NGI6, which raises the stakes that much more. 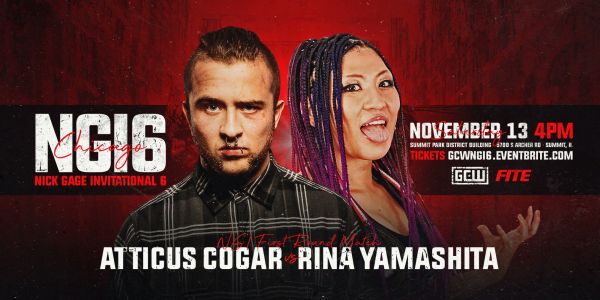 Next up is Atticus Cogar, “Silver Teeth Satan” himself, taking on Nick Gage Invitational first-timer Rina Yamashita. Cogar’s history in grueling tournaments is well-documented. In GCW, he’s competed in Acid Cup and Tournament of Survival endurances alike. Furthermore, in IWA Mid-South, he won last year’s Prince of the Deathmatches and the Double Death Tag Tag Team Tournament from this past April. Armed with a handful of skewers and a foul attitude, Cogar is nothing short of dangerous. At the Nick Gage Invitational 6 event, he takes on Yamashita, who will have made her GCW debut at Evil Deeds the evening prior. Though a talented joshi wrestler in various capacities, she’s proven her efficiency in hardcore match settings, particularly in Pro Wrestling FREEDOMS, where she is a former King of FREEDOM Tag Team Champion alongside deathmatch veteran Minoru Fujita. Winning their NGI debut match is a tall task, but if anyone is up for it, one would imagine it’s Yamashita.

Stay tuned to the Last Word on Pro Wrestling for more on this and other stories from around the world of wrestling, as they develop. You can always count on LWOPW to be on top of the major news in the wrestling world, as well as to provide you with analysis, previews, videos, interviews, and editorials on the wrestling world. GCW Nick Gage Invitational 6 is set to air Saturday at 5 PM EST on FITE. Tickets are also available via Eventbrite.