To close out the weekend, Gatoh Move Pro Wrestling will hold ChocoPro #176 on the promotion’s YouTube channel. Though there are only two matches set for the show, it should be a promising experience, especially with the Ichigaya Chocolate Square return of a prominent Actwres girl’Z talent. If you have some free time this weekend, this may be a show to check out. Without any further delay, let’s take a look at what Episode #176 of ChocoPro has in store. 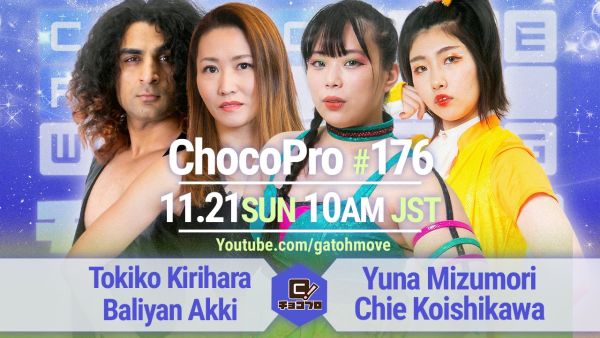 To start ChocoPro #176, the duo of Tokiko Kirihara and Baliyan Akki will take on the colorful, energetic tandem of Yuna Mizumori and Chie Koishikawa. Longtime fans of the show will know that this isn’t the first match either team has been involved in. Case and point, it was only last month that Kirihara and Akki teamed up. On Episode #167, “Otoki-san” and the self-proclaimed “Ace” of ChocoPro fell in a match against Masahiro Takanashi and Chon Shiryu. Despite this loss, it was evident that Kirihara and Akki were a formidable team. This upcoming episode of ChocoPro should prove no different, though it’s fair to assume that a victory won’t come easily given the caliber of opponents they’re up against.

Much like Kirihara and Akki, Mizumori and Koishikawa are no strangers to one another. Combining power and exuberant offense, “Yunamon” and “Chiezo” have teamed up on a number of occasions. With that said, their luck has been questionable at best. The last time they worked together was back on Episode #151 this past September, when they lost to Akki and current Super Asia titleholder Minoru Fujita. It would seem that this makeshift team is one that needs a win the most. Will this become a reality following their match on ChocoPro #176? Viewers will have to tune in to find out.

ChocoPro #176 marks the Gatoh Move return of SAKI following a four-month-plus absence. Her last Gatoh Move match was a major one; alongside Yuna Mizumori, with whom she won the first-ever One of a Kind Tag League, she lost to Asia Dream Tag Team Champions Best Bros in a title match. Since then, SAKI continued to work across various joshi companies, Pro Wrestling WAVE and home promotion Actwres girl’Z included. Not only is SAKI a 3x Asia Dream Tag Team Champion but she is the current reigning WAVE Tag Team Champion – alongside Hikari Shimizu – and AWG Champion. Simply put, if anyone has a right to the title of “Ace,” it would be her. As she returns to ChocoPro, SAKI enters a first-time singles encounter.

It would be fair to say that Sayaka has undergone steady growth over the past several months. Not only has her offense become more hard-hitting, featuring devastating forearms and dropkicks, but she recently adopted new gear to further this transformation. Despite such growth, however, Gatoh Move’s “Beautiful Cosplayer” is still aiming for that one big win. She came close against a number of opponents, ranging from Tokiko Kirihara to Makoto to Chris Brookes, but came up short each time. SAKI will be a formidable competitor in her own right, so if Sayaka intends on closing out ChocoPro #176 with a victory, she must put forth her best effort yet.