Karrion Kross was released along with several other WWE talent on November 4, putting to an end a troubled tenure on the roster of Monday Night Raw. Although he was a dominant force and a 2x champion on the developmental NXT brand, the powers that be at Raw never quite wrapped their head around Kross, a performer with a distinctive and sometimes polarizing style.

Did WWE Ever Understand Karrion Kross?

“The Tollman” Moves Toward NXT

Before WWE, “The Tollman” performed in Lucha Libre AAA Worldwide and its El Rey television project Lucha Underground, IMPACT Wrestling, and Major League Wrestling. Karrion Kross came to WWE having shed many names behind him: Killer Kross, the aforementioned “Tollman,” White Rabbit, and with a simple but effective persona, that of a brooding and enigmatic loner figure on the edge who goes simply berserk in the ring. Upon entering NXT, Kross was accompanied to the ring by real-life fiancée Scarlett Bordeaux. With Bordeaux as his valet, the two were an enigmatic pair whose smoke-wreathed, dark cabaret entrance always caused a stir at the Capitol Wrestling Center. Their act grew to take on Gothic undertones, with Scarlett a priestess figure who selected Kross’s targets using her Tarot cards.

Kross first attained the NXT Championship in August 2020, after defeating Keith Lee (also released on November 4, 2021) at NXT Takeover 30. However, a separated shoulder suffered during the match led Kross to rescind the title four days later. He returned in late 2020. As 2021 dawned, NXT Champion Finn Balor’s feud with the Undisputed Era stable was winding down, and his focus was turning to Kross. With Scarlet intrigued by the omens leading to Balor in her cards, he and Kross began to tensely circle each other.

Kross won the title from Balor on May 25 and defended it successfully in a fatal five-way against Pete Dunne, Kyle O’Reilly, Adam Cole, and Johnny Gargano on June 13 at NXT TakeOver: In Your House. Kross’s in-ring abilities made such a match entirely credible, with his vast array of suplex variations delivered punishingly with theatrical rage. One could easily believe that he could run through four other wrestlers in a blind rage. 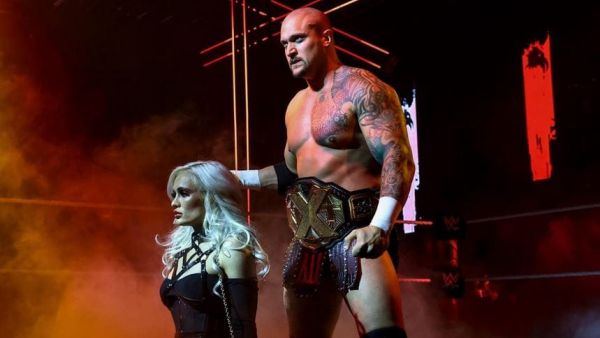 The Transition Toward the Main Roster

Kross’s character, always a bruising and blisteringly vitriolic figure, became ever more merciless and anarchic, violently venting and volatile until Samoa Joe returned to NXT to be an enforcer to general manager William Regal and deal with Kross’s one-man rebellion. Their feud led to Samoa Joe returning to in-ring action in a match against Kross for the NXT Championship at NXT Takeover 36, passing the title along to Samoa Joe as he departed for the Raw roster.

Kross came to Raw with a character that he, and audiences, knew well. Catchphrases, like “Tick tock,” “time’s up” everybody pays the toll,” etc, an enigmatic Gothic veneer concealing the kind of aggression that pro wresting fans generally adore in a heel character. Like “Stone Cold” Steve Austin, the Kross character confronted authority with unbridled rage but, like The Undertaker and Bray Wyatt, had highly conceptual supernatural undertones. With proper development, he could have been more than palatable to Raw’s audience. He could have been compelling and successful.

For whatever reason, be it creative stagnancy at WWE or internecine strife that eventually saw a rebranding of NXT, Kross’s time on the Raw roster was lackluster from the word, “go.” Bordeaux never appeared by his side at Raw, which meant goodbye to their customary entrance in which she lip-synced to his entrance theme, dressed in black latex or velvet, and bedecked in fog. Kross was given a clunky mask that rendered internet ridicule, a gladiator gimmick, and a series of meaningless, short matches beginning with a loss to Jeff Hardy on his first night.

No less than Mick Foley spoke out more than once online about the ill-treatment of Kross, and it was and remains baffling. Kross’s in-ring style could have made him the heir to Brock Lesnar or Goldberg, and he had great potential as a heel or an antihero tweener pitted against Raw babyfaces like Drew McIntyre or Big E.

His fate echoes the wasted potential of another NXT call-up, Malakai Black. As Aleister Black, he had a turbulent time as well on Raw. Following a program with Kevin Owens, Black and wife Zelina Vega were both released by WWE; upon being rehired some months later, Black was launching into a highly conceptual Gothic story arc and a feud with Big E when he was released yet again, wasting all the creative potential and in-ring talent he could have continued to bring to WWE as its big-name part-time PPV performers like Goldberg and Lesnar continue to age and approach their last outings.

Black, of course, resurfaced in All Elite Wrestling, the first destination that comes to mind for former WWE talent upon beginning their “future endeavors”. There’s no telling if Kross will go the same route, but it is clear that WWE simply never understood where he fit on Raw and beyond, despite all that  had made him compelling on NXT.