ChocoPro #171 marks a birthday celebration for two members of the Gatoh Move Pro Wrestling crew. The two individuals being celebrated are none other than “The Beautiful Cosplayer” Sayaka and Tokiko “Otoki” Kirihara, who were born two days apart in different years. Typically, when it comes to birthday episodes, those being celebrated take part in major matches. This will be no exception, as two fourth-generation Gatoh Move stars are set to square off. Here is what viewers should know before the episode airs live on the official Gatoh Move YouTube channel. 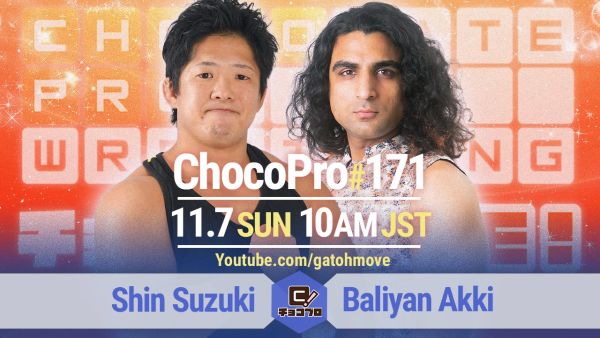 Baliyan Akki can’t be feeling too happy heading into ChocoPro #171. On the previous episode, he faced Masahiro Takanashi, Yuna Mizumori, and Chon Shiryu in a four-way contest to determine an interim Super Asia Champion. With current titleholder Minoru Fujita out of action for the foreseeable future, as he’s recovering from COVID-19, a new singles champion had to be decided. Despite Akki’s best efforts – and though it appeared he was on the cusp of victory several times – it was Shiryu that emerged with the blue title.

On this episode, Akki is set for singles action against Shin Suzuki, who has made two other ChocoPro appearances, though has yet to pick up a victory. This will be an uphill battle for the Pro Wrestling HEAT-UP star; not only is Akki likely still fuming from the aforementioned loss, but he’s currently without his fellow Asia Dream Tag Team Champion, Mei Suruga, who surprised the wrestling world by making her way stateside for All Elite Wrestling. This will be an opening contest not to miss. 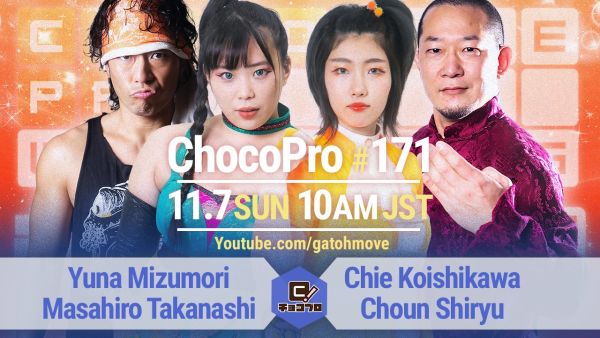 Next up, on ChocoPro #171, is a mixed tag team contest featuring the other three Super Asia title competitors and “Too Much Energy” herself, Chie Koishikawa. Yuna Mizumori and Masahiro Takanashi are no strangers to one another, as they’ve teamed with each other multiple times and share a common ally in DDT Pro-Wrestling star Chris Brookes. However, seeing as how they were opponents only 24 hours earlier, it will be interesting to see how well “Yunamon” and the beer-loving “Drunken King” mesh.

On the other side of Ichigaya Chocolate Square will stand the team of Koishikawa and the new interim Super Asia Champion, Chon Shiryu. Following the main event of ChocoPro #170, Shiryu was confronted by Mizumori. “The Pineapple Girl” seemed to throw her name in the proverbial ring as the next challenger. Before this can take place, the new titleholder must team with the energetic “Chiezo” against two game opponents. The way that this match unfolds may paint a clearer picture regarding the Super Asia Championship. 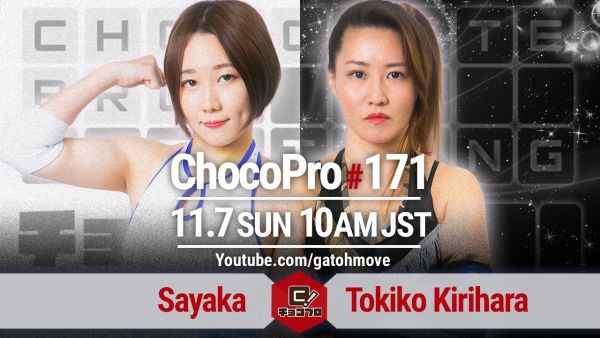 In the main event of ChocoPro #171, two birthday girls will wage war. Sayaka and Tokiko Kirihara have teamed on a select number of occasions; due to Sayaka’s white attire and Kirihara’s black gear, they adopted the name of Othello. The first time they ever teamed up, in a traditional two-on-two tag team match, was back on November 10, 2019. On this day, they fell to the duo of TAMURA and fellow fourth-generation talent Rin Rin. Despite this, both competitors built their skill sets over time. “Otoki” continued to assert dominance as arguably the most physically imposing of the fourth-generation stars. Meanwhile, Gatoh Move’s “Beautiful Cosplayer” adopted a more hard-hitting approach; this may make her an extra challenge for Kirihara heading into this bout.

This main event is also interesting in that it marks the first time Sayaka and Tokiko Kirihara have faced off one-on-one. Of course, they were part of several tag team and multi-person matches, the recent Halloween Battle Royal on Episode #169 being a prime example of the latter. With that said, they never had an opportunity to test their mettle one-on-one. For this reason alone, the main event of ChocoPro #170 will be a must-see. Can Sayaka pick up the victory over her older, more physically dominant adversary? Will it be Kirihara that takes home the win on this special birthday episode of ChocoPro? Tune in to find out.