This week’s edition of NWA Powerrr is a special one in that it takes a look back at a recent supercard. This past October, the National Wrestling Alliance partnered with Tried-N-True Pro Wrestling for NWA By Any Means Necessary. This show was part of NWA’s Pop-Up event series, which sees them work with local independent organizations to put on shows. TNT was founded in 2015 and is run by current NWA star Crimson. For those that have not attended the aforementioned supercard, tonight’s NWA Powerrr will focus on the first half of the action. Here’s what to know. 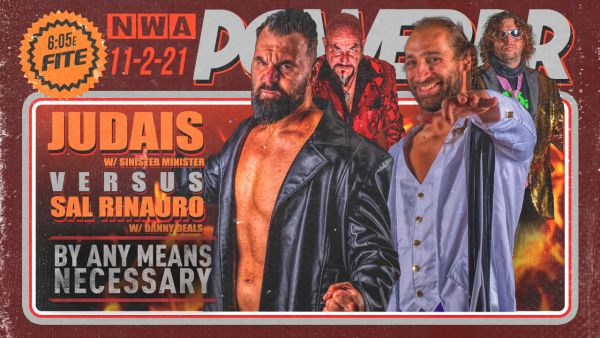 Fighting for What’s on the Line

In one of the most unlikely matches of the show, the imposing Judais will take on “Everybody’s Best Friend,” Sal Rinauro. On paper, the two wrestlers couldn’t be more different, given Judais’s methodic and dominant approach in contrast to the never-say-die demeanor of Rinauro. Furthermore, they will be accompanied by appropriate managers, with Judais accompanied by the legendary Father James Mitchell and Rinauro having the energetic Danny Deals by his side. It’s important to note that, due to his victory at NWA 73 in the number one contendership battle royal, Judais has a future NWA National Championship match down the road. Meanwhile, Rinauro has been steadfast in his own title endeavors. On this week’s edition of NWA Powerrr, the two face off for the current contender’s title opportunity. However, if Rinauro loses, he will not be able to challenge for the title again for the next 18 months. Simply put, there is much at stake.

The NWA World Women’s Tag Team Titles Will Be Defended

The first half of this two-part NWA Powerrr special sees the World Women’s Tag Team Championship on the line. The Hex, the team of Allysin Kay and Marti Belle, won the revived titles at NWA EmPowerrr this past August. Since then, Kay and Belle have kept a firm grasp on the titles, successfully defending them twice up until this point. The competition is evergrowing, however, which brings them head-to-head with the duo of Tootie Lynn and Thunderkitty. Those that watch the company’s programming will be familiar with both challengers, even beyond their involvement at EmPowerrr in the NWA Women’s Invitational Cup. Furthermore, Thunderkitty is the current IWA Mid-South Women’s Champion in her second reign; meanwhile, Lynn had a strong showing in said Women’s Invitational, lasting to the final two before falling to the eventual winner, Chelsea Green. Expect this title match to be nothing short of competitive.