This week, Gatoh Move Pro Wrestling kicks off ChocoPro Season 10. Those that have been watching Gatoh Move’s YouTube wrestling show since the beginning will attest to the strides the show made since early 2020. It took a negative situation – namely, the pandemic – and created something entirely its own. This will be a big debut episode, as a new contender for the Super Asia Championship will be decided. Who will be the one to step forward and challenge Minoru Fujita next? Let’s take a deeper dive into ChocoPro #163. 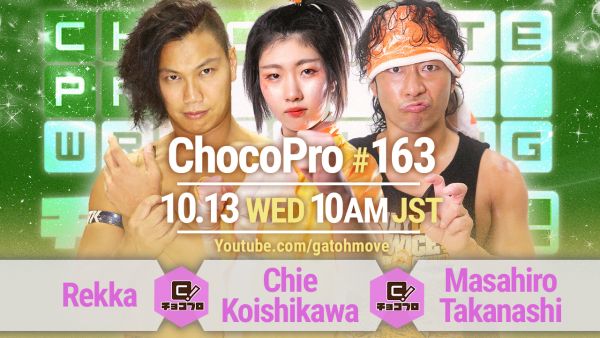 Kicking off the ChocoPro Season 10 will be a three-way match featuring the debut of a new fighter. Known primarily for his work in Oriental Wrestling Entertainment, based in China, Rekka has had a busy 2021. From Pro Wrestling FREEDOMS to GLEAT and beyond, Rekka has made an impact in various promotions. Though this match marks his ChocoPro debut, he’s made Gatoh Move appearances since 2016, his last being in March of 2020 prior to the COVID-19 pandemic. On ChocoPro #163, he battles “Too Much Energy” Chie Koishikawa, the ChocoPro Season 9 MVP voted by the fans, and the technically savvy known as Masahiro Takanashi. Between the exuberant up-and-comer and the beer-loving veteran, Rekka has his work cut out for him. Expect this three-way encounter to be nothing short of exciting. 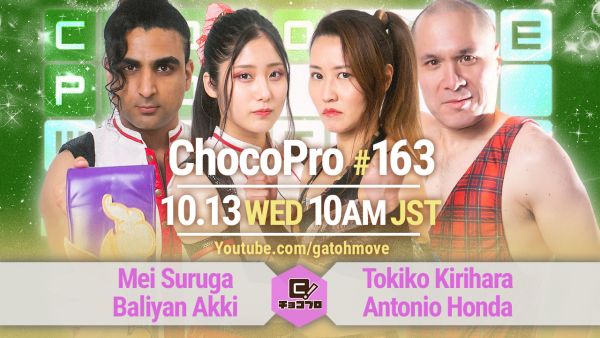 It wouldn’t be a season opener without the Asia Dream Tag Team Champions in action. In a non-title match, current titleholders Best Bros will take on one of the craftiest duos in Ichigaya Chocolate Square, Black Comaneci. Mei Suruga and Baliyan Akki are coming off a major win seen during the ChocoPro Season 9 finale, where they bested Egg Tarts and Masahiro Takanashi and Hoshitango to retain their titles. One has to wonder, at this point, who can stop Best Bros. Tokiko Kirihara and Antonio Honda, also known as Black Comaneci – or White Comaneci, depending on the situation – intend to put a halt to the champions’ momentum. Despite their oftentimes comedic antics, they’ve been a proven force in ChocoPro, so a win can make all the difference in terms of their own momentum. Who will emerge victorious on ChocoPro #163? 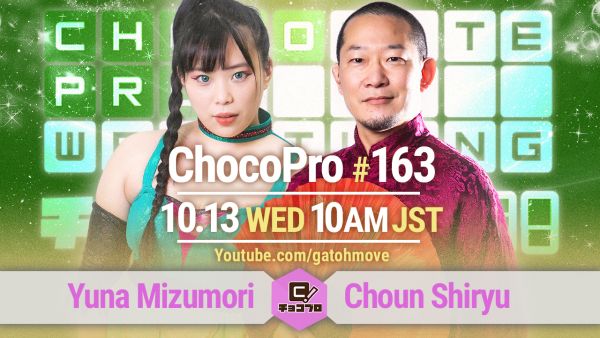 As announced prior to the conclusion of ChocoPro Season 9, Season 10 will see a new contender for the Super Asia Championship decided. “The Pineapple Girl,” Yuna Mizumori, will battle the fast-moving “Dragon” himself, Chon Shiryu, in the main event. Looking back on the history of ChocoPro, there are few that had the development that “Yunamon” has seen. From her intense wars stemming from the words of Emi Sakura to reuniting with SAKI to reform TropiKawaild, and everything in between, she has been waiting for her moment to truly break out. Can ChocoPro Season 10 provide the platform she needs to make it to the next level as Super Asia Championship?

To ensure that this happens, she must overcome a wily veteran in the form of Chon Shiryu. Though he’s largely known by ChocoPro viewers as one-half of Dragon Ninja, teaming with Sayuri, “The Dragon” can hold his own in singles competition as well. In Season 9 alone, he picked up victories over the likes of Masahiro Takanashi and Asia Dream tag team titleholder Baliyan Akki. Shiryu’s ability to utilize the unique surroundings of Ichigaya Chocolate Square to his advantage made him one of the most formidable wrestlers Gatoh Move has seen. It wouldn’t be farfetched to see him win his first Season 10 match and go on to challenge Minoru Fujita, either.

Either way, both competitors have their cases as to why they should be next in line for a Super Asia Championship match. Not only has Mizumori seen the aforementioned growth, but she’s an accomplished wrestler in Gatoh Move, having won the Asia Dream Tag Team Championship twice, not to mention come out victorious in the first-ever One of a Kind Tag League. Meanwhile, since 2006, Shiryu has held gold in many organizations, Ice Ribbon and DDT Pro-Wrestling included, which speaks to his reputation. One aspect that Mizumori and Shiryu share is hunger; whose will be stronger heading into ChocoPro #163?

Updates will be made as additional matches are confirmed for ChocoPro #163.