August 21’s SummerSlam 2021 event at Las Vegas’s Allegiant Stadium was largely everything World Wrestling Entertainment hoped that it would be. It was a massively attended live event, with a hint of Hollywood in the proceedings thanks to celebrity guests Tiffany Haddish and Mario Lopez, achieving two of WWE’s objectives. In the same week that rival All Elite Wrestling debuted legendary former WWE performer CM Punk, WWE managed to keep their name in the game with the returns of Becky Lynch and Brock Lesnar at SummerSlam 2021, seemingly on the Friday Night SmackDown side of things. 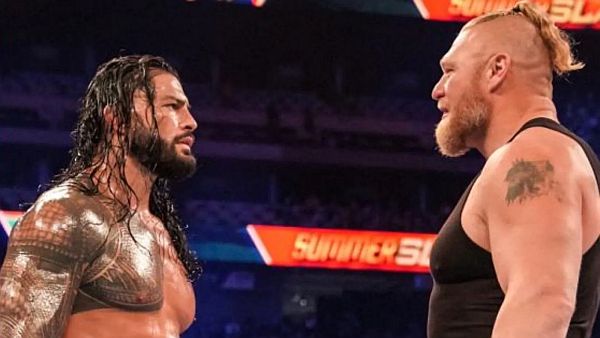 The Look of SmackDown Following SummerSlam 2021

Both Lynch’s and Lesnar’s returns have been highly speculated about for months heading into SummerSlam. When the moments finally came, both were pitted against opponents currently on the SmackDown roster.  Lynch was the Raw Women’s Champion in 2020, and vacated the title at the start of her pregnancy and parental leave. The title was up for grabs in a surprise twist to the women’s Money in the Bank ladder match that year, and the championship went to winner Asuka. However, Lynch’s return pitted her against SmackDown women’s champ Bianca Belair.

Lynch quickly dispatched of Belair’s slated opponent, Carmella, who was substituting for the absent Sasha Banks. After a few moments of feeling out each other’s and the crowd’s energy, Lynch and Belair spontaneously agreed to lock up for the championship. In mere seconds, after a slam and a pin, Becky Lynch was SmackDown Women’s Champion. The seeds of an intriguing rivalry between the much-feted Belair and the iconic Lynch have been planted, and Sasha Banks, who will surely make much of Lynch seizing the opportunity that was originally meant for her, will undoubtedly be in the mix, too. The torch of the women’s evolution is being passed to Belair from two women who built the house, and apparently, this will all take place on SmackDown, not Raw where so much of Lynch’s and Banks’s legends were written.

From One Return to Another

The other shocking return of the night, Lesnar, also looks set for a program with a SmackDown opponent, Roman Reigns. The “Beast” has been notoriously cooling his heels on his Canadian farm while both the combat sports and sports entertainment worlds speculated about what the hottest free agent in both milieus was going to do next. Roman Reigns fought a hard war against a determined, and at times dominant, John Cena, then Lesnar waltzed in. Once again, a Superstar last seen on Raw seems to be poised for a SmackDown run.

Raw predates SmackDown by about six years, first airing in 1993. Unlike previous WWE television products, it was live rather than taped, which contributed considerably to the spontaneous and provocative excesses of the “Attitude Era.” Even as WWE’s tone shifted back to family entertainment, Raw remained the “A” show, where the top tier of WWE’s popular performers were showcased, where new arrivals from the NXT roster were promoted. During the 2020 “Pandemic Era,” a shift in popularity occurred between the red and blue brands. Monday Night Raw experienced some of the lowest ratings in its history, and was critically panned for its repetitive match combinations, unironically corny dialogue,  the never-ending, opaque saga of the demonically possessed Alexa Bliss, and the divisive return of Eva Marie while Raw was housed in the crowdless Amway Center ThunderDome.

Looking on the Brighter Side of Things

SmackDown’s ThunderDome days were far more of a success. Roman Reigns returned to active duty at 2020’s SummerSlam, claiming the Universal Championship and setting up shop on the SmackDown roster. His “Tribal Chief” character dominated the action in a nuanced drama as he sought to dominate key rivals like Daniel Bryan and Edge, while also subjugating cousins The Usos into his loyal henchmen. The amoral deeds and frayed dynamics of the three were compelling to fans and pro wrestling industry critics, and galvanized Reigns’s always shaky popularity.

Along with the Bloodline, other highlights of the ThunderDome were Bayley’s equally well-executed heel persona, the phenomenal rise of Bianca Belair, Big E’s emergence as a singles competitor and Intercontinental Championship reign, and longtime fan favorite Natalya winning the Women’s Tag Team Championship alongside the long-suffering Tamina. Whether it was ruthless aggression or feel-good moments, SmackDown delivered during the pandemic’s darkest days.

SummerSlam 2021 showed that SmackDown is where WWE is now investing the lion’s share of its talent and remaining interest in telling compelling stories. Eyes are going to be on Lesnar’s and Lynch’s next moves now that they have come home. For the WWE Universe, it seems that will mean tuning in on Friday, rather than Monday, nights.