The period of time World Wrestling Entertainment was forced to run every single show from April 2020 to early July 2021 is known, by many fans, as the WWE Pandemic Era. It will probably be remembered as one of the worst years in the company’s history in terms of fan reception to both the product and the company itself.

In roughly a year and a half, WWE came under fire after numerous controversies. These included unjustified mass releases, selling the WWE Network in the U.S. to Peacock, banning talent from earning money from third parties, and just overall bad writing all over all their programming. This period will forever be looked back at on, by many, probably the most problematic year in the history of a consistently problematic company.

With all this in mind, we embark on the mission to find a few things WWE  did right these past 18 months. What is worth looking back on, during the WWE Pandemic Era, and remember fondly when thinking about that one time in history where the world stopped and WWE had to hold shows with no live audiences?

The Bright Points of the WWE Pandemic Era

One of WWE’s best moves in a year and a half full of bad moves is, without a doubt, the implementation of the ThunderDome. For months since the pandemic began, WWE were forced to run every live show from the Performance Center in Orlando, Florida. For months, WWE struggled in finding the formula to produce visually appealing wrestling events.

This all changed on August 21, when the ThunderDome was first introduced. It emanated that night’s edition of SmackDown and only recently, after 11 months of service, it was retired.

The ThunderDome was exactly what WWE needed at the time. It finally gave the company an identity during the pandemic. It immediately gave them a big-league identity as the structure resembled the one used by the NBA a few months earlier. Not only that, but it gave WWE the ability to control much more aspects of the way they produce television. They demonstrated with the effects used in matches involving superstars like Alexa Bliss and Bray Wyatt.

The last reason why the ThunderDome will ultimately be looked back at as a success is the noticeable ratings bump it gave their weekly and PPV shows. These were even acknowledged by Stephanie McMahon in several interviews, referring to the ThunderDome as “giving the spectacle back to the fans”.

Their Most Valuable Players

WWE has been, and will probably continue to be, under the storm of heavy criticism pretty. In fairness to everyone, it rarely is the talent that gets criticized, especially during this recent times. A glance through social media will show how talent is appreciated for their work. Who were the ones that stood out during the WWE Pandemic Era?

While it may be unfair to say some of these wrestlers worked harder than others, it should also be recognized how a select few were able to do some of the best work of their respective careers. They will forever be remembered as the ThunderDome, and Pandemic Era, MVPs.

While it is completely subjective who is mentioned here – and absolutely fine if anybody disagrees or thinks somebody else should have made the list – the group of Bobby Lashley, Drew McIntyre, Roman Reigns, Sasha Banks, and Bayley could do no wrong from beginning to end of the pandemic.

The program between Lashley and McIntyre began shortly after WrestleMania 36 in the PC. After months of Matches of the Year candidates, especially from McIntyre, and separate character development especially from Lashley, both wrestlers found each other again in February a year later. When they faced off in the opening match of WrestleMania 37 for the WWE Championship, it almost felt intentional.

From one brilliant proven partnership to another, Sasha Banks and Bayley went from being draped in gold as champions of their respective brands and the WWE Women’s Tag Team Championship at the same to their friendship finally exploding, giving us arguably their second-best match together inside Hell in a Cell.

Finally, our last MVP of the pandemic era, Roman Reigns, finally became the heel we all wanted and knew would work years ago. After his return and quick Universal Championship win during the summer last year, Reigns completely reinvented his character to “The Tribal Chief” and has since wrestled some of the best matches in his career. Bouts against the likes of Jey Uso, Cesaro, and Drew McIntyre himself etched Reigns as the focal point of SmackDown every week. 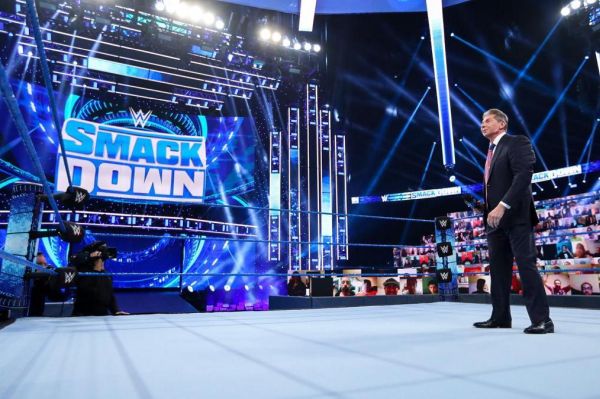 The WWE Pandemic Era – In Conclusion

To say this was a terrible time to be a WWE fan would be a massive understatement. The positives discussed here, in no way, shape, or form, outweigh the massive negatives of the terrible week-to-week product and the questionable decisions made at a management level.

With the WWE Universe returning to live weekly events, it seems creative is getting a little boost and in-ring action is only guaranteed to get better with fans at ringside. Thus, while there might be too few things to praise about WWE in recent memory, there is all the reason to start watching WWE programming with a new set of eyes and a fresh perspective to what’s to come.

Lastly, we should always keep in mind that while the company, at an administrative level, made questionable decisions and judgments, there is an entire roster that performs at the highest of levels under circumstances no one had ever experienced before. This is what truly deserves the respect and recognition from fans during these uncertain times.