Match Point is an ongoing series at Last Word on Pro Wrestling, where we look at intriguing matchups in indie wrestling and beyond. They may be dream matches, first-time matchups, or hotly anticipated rematches. In this piece, we take a look at the Founder of Gatoh Move Pro Wrestling‘s final match before her excursion to America: Emi Sakura vs Mei Suruga.

As the professional world is already privy to, Emi Sakura is America-bound, ready to make her official return to All Elite Wrestling. She won’t come alone, though, as her young pupil Lulu Pencil will be joining her in an assistant role. ChocoPro #144 was an emotional episode, to say the least, as it marked Sakura’s final show before her journey to the United States. Following the action of ChocoPro #144, it was learned that Sakura’s time in Gatoh Move Pro Wrestling, at least for now, isn’t done yet. There is still one more match to take place: Emi Sakura vs Mei Suruga

Emi Sakura vs Mei Suruga: What to Know 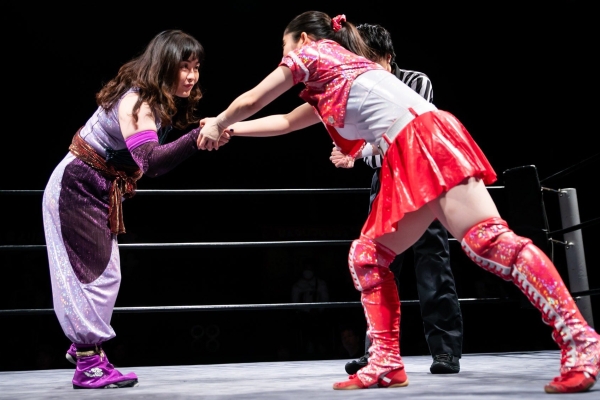 The Development of Mei Suruga

To fully understand the importance of this match, wrestling fans must turn back the proverbial clock to 2018. It was during this period when Mei Suruga began her wrestling training. Prior to this, Suruga was hesitant. Standing at 4’10”, she believed that she was too small to be a wrestler. Nonetheless, she learned under Emi Sakura via Daredemo Joshi Pro Wrestling, a platform that also served as a safe space for those with little to no prior wrestling experience. In other words, in theory, anyone could be a wrestler.

Only a short time after her training began, Suruga made her official debut, fittingly enough against Sakura. They faced each other in May of 2018, with the latter picking up the victory over her protege. This was only the beginning of Suruga’s journey in wrestling, however. Though she lost the bulk of her matches early on, slowly but surely, she built a solid reputation for herself. She even competed in promotions such as Sendai Girls and PURE-J; this indicated both rapid growth on the part of Gatoh Move’s “Apple Girl” and undeniable trust from Sakura.

This trust became further evident in 2019 when she started to travel outside of Japan. For instance, in November of that year, she participated in the SHE-1, a women’s wrestling tournament held by Pro-Wrestling: EVE. In Block C, she earned 2 points, defeating Jetta. She also competed in a special singles match against Lulu Pencil; Suruga’s future tag team partner, Baliyan Akki, served as the referee. Following the COVID-19 pandemic the year after, Suruga was more than ready to step up and assist Sakura and the Gatoh Move crew.

In March of 2020, Gatoh Move launched its new initiative known as ChocoPro, a YouTube wrestling show with no crowd that contained the same Gatoh Move action fans have come to expect. As one would expect, Suruga became a prominent part of the show, making her debut on episode #2. This proved to be an excellent platform for “Mei-chan,” too. In addition to wrestling well-received matches against the likes of Yuna Mizumori and ASUKA, the latter also known as VENY, she was able to flesh out her personality, which was equal parts energetic and mischievous. Sakura needed assistance in building ChocoPro and Suruga was up for the task.

Suruga’s hard work would be rewarded further when both her and Sakura were invited to be part of the AEW Women’s World Championship Eliminator Tournament this past February. This was Suruga’s first appearance on All Elite Wrestling programming, exposing her to a brand new audience. Though her first-round effort was a valiant one, Suruga lost to Yuka Sakazaki. Meanwhile, Sakura fared better, besting VENY in the first round before falling to Sakazaki in the semifinals. These matches were filmed off-site in Japan. AEW fans would have to wait several months before Sakura’s return to American soil.

Meanwhile, in ChocoPro, Suruga and Sakura became fierce rivals. This was evident the December prior; on New Year’s Day, Sakura and Kaori Yoneyama, the reigning Asia Dream Tag Team Champions, lost their titles to Suruga and Akki, also known as Best Bros. As of this writing, Best Bros remain standing atop the mountain of Gatoh Move, having successfully defended the purple belts on 7 occasions. On the occasions when Suruga and Sakura faced off, in tag team competition or otherwise, the intensity and respect shared were evident. In only a few short years, “Mei-chan” evolved from the uncertain rookie to a confident, well-rounded wrestler, one that has since proven her worth in Michinoku Pro, Tokyo Joshi Pro-Wrestling, and elsewhere.

The end of the yesterday’s show was chaos, but I love to see everyone’s reaction 😂
➡️https://t.co/3pfMcMRU9I

Emi Sakura vs Mei Suruga is an important match for numerous reasons. First, and foremost, it will be Sakura’s last official match before she bids farewell to Gatoh Move. Second, and just as importantly, it will be a showcase of Suruga’s evolution. As stated earlier, she underwent an evolution since her debut. She might not have began as the most confident wrestler, but as she continued to train and put in the work, it was evident how much she was meant to wrestle.

“Mei-chan” has often been considered a wrestling prodigy and it’s difficult to deny this sentiment. The fact that Suruga was ready to help train wrestlers, alongside Sakura, roughly one year after her official debut is evidence of this. This match will be just as much of a test for the pupil as it will be for the teacher. Can Suruga pick up that elusive singles victory over Sakura before the latter begins her excursion? Will Sakura prove, once again, why she is the mentor? This will be a match to tune into on the official Gatoh Move YouTube channel.