Appearing for the first time in Los Angeles, California since February, Game Changer Wrestling returns to the LA area with GCW No Signal in the Hills. Arguably the largest independent wrestling company in the world isn’t coming alone, however, as GCW plans to bring its biggest names with them. The promotion last appeared in the area for Josh Barnett’s Bloodsport 5, so it’s fair to say that there are sizable expectations from fans in attendance and those watching from home.

Furthermore, GCW is coming off a history-making Homecoming Weekend, featuring the crowning of a new controversial GCW World Champion and the announcement of an upcoming War Games encounter. How can GCW top perhaps their biggest back-to-back weekend of the year? It’s difficult to say, though they will try with No Signal in the Hills. Here is what viewers can expect as they either step into the Ukrainian Cultural Center or tune into FITE to catch the action.

GCW No Signal in the Hills Card 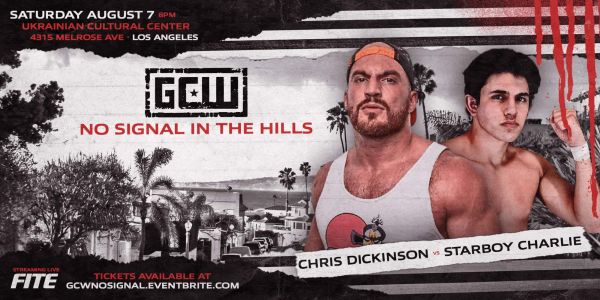 It’s safe to say that Chris Dickinson and Starboy Charlie had eventful GCW Homecoming outings. In the case of Dickinson, on Night Two, he defeated AEW star Cezar Bononi, who made his Game Changer Wrestling debut in a major way. Despite the Brazilian star putting forth a valiant outing, it was GCW’s “Dirty Daddy” that emerged victorious. Meanwhile, Starboy Charlie was part of both nights, and though he lost both encounters, he showed undeniable promise. On Night One, he took on GCW favorite, as well as AEW’s own, Marko Stunt; the following night, Charlie took current ROH Pure Champion Jonathan Gresham to the limit in what many fans considered one of the best matches of the entire weekend. In their own ways, Dickinson and Charlie are entering GCW No Signal in the Hills with momentum.

Chris Dickinson vs. Starboy Charlie was the first match announced for No Signal in the Hills and it’s one that many GCW fans are anticipating. Keep in mind that the two first squared off at GCW Zombie Walk this past June. For over 16 minutes, the upstart in Charlie gave Dickinson a fight, making the latter earn his eventual victory. Now, over two months later, the two will square off in Los Angeles, California. Can the blue-chipper in Charlie pull off a miracle in the Ukrainian Cultural Center? Will this be yet another W to add to the ever-expanding column of Dickinson? This will be a contest to keep an eye on. 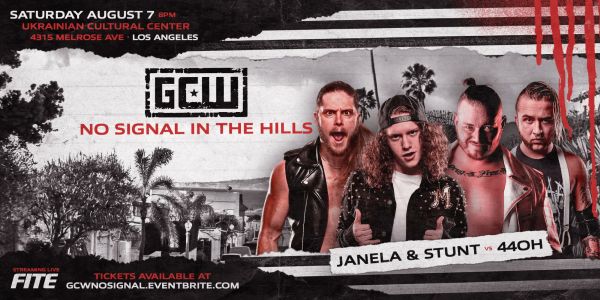 44OH had an incredible influence on GCW Homecoming. In the main event of Night One, which saw Nick Gage defend the GCW World Championship against Matt Cardona, 44OH got involved at the titleholder’s expense. This led to Rickey Shane Page seemingly helping Gage fend off the group, only to turn on “The King of Ultraviolence” with a kick to the groin, costing him the title in the process. On Night Two, 44OH interrupted Gage’s attempted assault on “Smart” Mark Sterling, Cardona’s associate, the group looking to finish what they started the evening prior. This led to Alex Colon and several Second Gear Crew members coming to Gage’s aid. With the group warfare at play, Gage issued a challenge no one expected: 44OH vs. Team MDK in a War Games Match at GCW The Art of War Games.

Prior to this inevitably violent encounter in Chicago, 44OH’s Page and Atticus Cogar will do battle with two AEW stars – not to mention GCW stalwarts – Joey Janela and Marko Stunt. These men were involved in their own Homecoming Weekend encounters. In the opening match of Night One, as mentioned earlier, Stunt took on Starboy Charlie in the opening bout; this saw “Mr. Fun Size” pick up the victory. On Night Two, Janela took on Cogar in a violent deathmatch. While this match type is known for being Cogar’s specialty, “The Bad Boy” proved his own intestinal fortitude, picking up the win over “Silver Teeth Satan.” With their upcoming War Games bout fast approaching, expect the nefarious 44Oh to stop at nothing to win at GCW No Signal in the Hills. 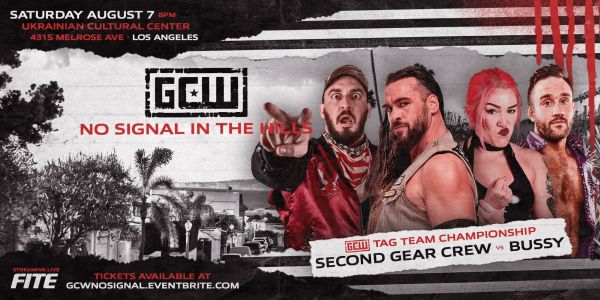 Not unlike their future War Games opponents, Second Gear Crew left an indelible impact at GCW Homecoming Weekend. Faction members Mance Warner and Matthew Justice were in action on Night One, defeating former reluctant allies and current heated rivals Jimmy Lloyd and G-Raver for the GCW Tag Team Championship. On Night Two, not only did Justice and Warner best the team of Ninja Mack and Dante Leon, but as stated earlier, the entire Second Gear Crew aided Nick Gage in warding off 44OH. Though War Games will be on the champions’ minds, they will have to keep their eyes on their opponents heading into GCW No Signal in the Hills.

On Night Two of GCW Homecoming, with EFFY at her side, Allie Katch picked up a victory over current AEW star Penelope Ford. Though her personality went an overhaul following her shedding of the Allie Kat persona, Katch has maintained her alliance with “The Weapon of Sass Destruction.” When it comes to teams in GCW, it’s fair to say that BUSSY is among the most prevalent. With that said, they’ve yet to win tag team gold, together or otherwise. To capture the GCW Tag Team titles, however, would mean overcoming a duo that thrives on hard-hitting, borderline lawless punishment. Expect these teams to give it their all on Saturday. 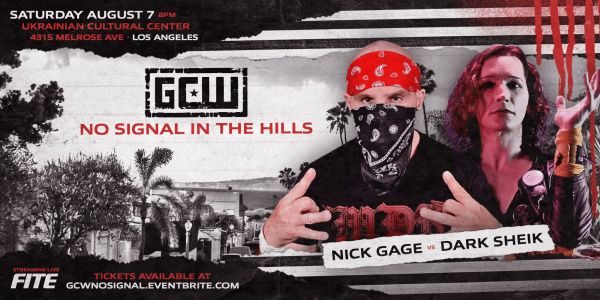 When a King Meets a Priestess

Nick Gage has had an eventful few weeks. “The Man, The King, The God” of ultraviolent wrestling recently made his mainstream TV debut on AEW Dynamite, taking on Chris Jericho as one of the five chapters in MJF‘s “Labours of Jericho.” Even before this, however, he lost the GCW World Championship to Matt Cardona before finding himself in the crosshairs of 44OH. With his allies in Second Gear Crew, however, it’s fair to say that the pizza cutter-wielding purveyor of punishment will have plenty of support. At GCW No Signal in the Hills, Gage’s focus is singles action. For the first time, “The King” goes one-on-one with “The Most High Priestess.”

As the Founder of Hoodslam, Dark Sheik is an independent wrestling star in her own right. Her impact on indie wrestling on the West Coast alone earns her this title. In addition to her ongoing efforts to nurture up-and-coming talent, the Georgia native has continued to build her name throughout various promotions. She made her GCW debut at last year’s EFFY’s Big Gay Brunch event, where she lost to fellow LGBTQ+ talent Still Life With Apricots And Pears, currently known as Edith Surreal. Though she’s faced many unique talents including Holidead and EFFY himself since then, Sheik has perhaps never encountered an individual as intense as Gage. Can she pick up a victory over the former GCW World Champion?

GCW No Signal in the Hills will take place in Los Angeles, California on August 7, 2021.

Stay tuned to the Last Word on Pro Wrestling for more on this and other stories from around the world of wrestling, as they develop. You can always count on LWOPW to be on top of the major news in the wrestling world, as well as to provide you with analysis, previews, videos, interviews, and editorials on the wrestling world. GCW No Signal in the Hills is set to air Saturday at 11 PM EST on FITE.