The “Forbidden Door” has been slammed open quite a couple of times now and this week was a good sign of that. Jay White made his in-ring debut for IMPACT Wrestling and Hiroshi Tanahashi appeared via pre-taped promo in AEW Dynamite to announce he’ll challenge for the IWGP U.S. title soon in the space of 48 hours. With this in mind and with other examples of NJPW wrestlers making their way to American promotions like Hikuleo and Yuji Nagata, we compiled a list of NJPW wrestlers we’d like to see compete in America, specifically for All Elite Wrestling.

First on our list is someone who has quite a large fan following as well as a captivating and frankly terrifying take on the strong style of wrestling. Ishii has not been a part of a major story or held a major championship lately, which might make him perfect for a stint in AEW.

While we’re not suggesting Ishii makes the jump permanently to the States, there is no doubt that AEW’s presenting of Japanese superstars in their programming has been positive for their rating and fans’ feedback. So using the same line of logic, a legit superstar in Japan that hasn’t been seen on American TV ever like the Stone Pitbull seems like a slam dunk for any major promotion looking for a foreign attraction.

What makes him an attraction is his in-ring style which arguably hasn’t changed or slowed down ever since he rose to prominence thanks to his relentless violence and pain tolerance.

There is no denying the matches he could have with smaller guys who we know for a fact can take a beating like Jungle Boy, Rey Fénix, and especially Darby Allin is enough to get us excited.  That’s not even mentioning the potential rematches Ishii could have with some former NJPW talents.

We last saw Cobb in AEW just a few weeks before the Covid pandemic hit worldwide aligning himself with Chris Jericho’s Inner Circle by attacking and one week later losing to Jon Moxley on AEW Dynamite back in February 2020.

While Cobb’s presence in AEW was an awesome surprise and a true breath of fresh air at the time, it has been too long since we’ve seen him and now that the All Elite roster has grown both in number and character development there is a bottomless pit of talent Cobb can work with while delivering world-class performances every time.

Take Chris Jericho for example, his character and that of every member of the Inner Circle has massively changed since Cobb was here which we believe makes for a couple of great potential stories like Jericho re-introducing Cobb to put a stop to MJF or Jericho eventually replacing Jake Hager’s spot in the group with Cobb.

To summarize, Jeff Cobb is one of the best wrestlers in the world when allowed to work a quick hard-hitting style and given enough time to do so, considering we only saw him in an AEW ring once we believe there is still tons more of the former Matanza Cueto to show in a high profile American company. 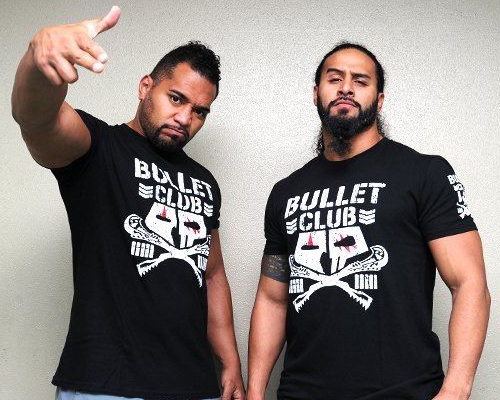 What may sound like an obvious pick, the team of Tama Tonga and Tanga Loa has dominated the heavyweight tag team division in New Japan for years now having won the championships a total of seven times and even holding the Ring of Honor tag belts once. For a couple of years now the pair have been ready to step up to a new challenge.

While we know the Bullet Club tag team has nothing to prove there is an undeniably big opportunity for Tonga and Loa to make a name for themselves worldwide and officially go down in history as one of the best teams of their generation. Putting themselves in front of an American audience and competing against the best AEW has to offer would only help their case.

And that is where the real opportunity for fans comes from, as it has been said a million times the tag team division in All Elite Wrestling has been one of the better things about the promotion. Just by looking at some of the teams on the roster for G.O.D to face there’s good reason to get excited about the matches we could see.

Matches against teams like the Lucha Bros., Santana & Ortiz, FTR, and a blood feud against the Young Bucks over their departure from Bullet club all those years ago are just some of the combinations from which we could expect a Match of the Year from Tama Tonga and Tanga Loa.

Finally, for the last pick in our list we went with yet another wrestler practically unknown to American TV audiences.  ZSJ is another ridiculously talented non-Japanese wrestler under contract to New Japan Pro Wrestling. After years of watching Sabre grow and master his craft on the indies, we could finally see a major high-profile program in a major U.S. promotion against some of the best wrestlers in the world.

For people who don’t know who Zack Sabre Jr. is there is no way we could ever do him justice by writing about him. He has been arguably the best technical wrestler in the world for a couple of years now and after tearing down houses all over the independent circuit in Europe and the U.S., and even after a couple of matches for WWE in the Cruiserweight Classic, there might be hope to see the Technical Wizard on TNT sooner rather than later.

ZSJ and his impeccable technical style might be a challenge to translate to a current product of AEW which is somewhat reliant on a faster-paced, athletic style that guys like Tomohiro Ishii and Jeff Cobb better exemplify.

Keeping this in mind we believe that if paired up correctly in AEW, Sabre Jr. could mix it up with guys that not only don’t share his same style but are actually far from it like Orange Cassidy and Penta el Zero M. There is also the possibility of a dream match with Bryan Danielson on the table if the rumors of Danielson joining AEW are to be believed.

To conclude, there is an unbelievably high upside to wrestlers from New Japan we have never seen in a major American promotion making their way to AEW. While NJPW wrestlers like Kazuchika Okada or Tetsuya Naito could make a major impact in the system by just showing up and wrestling anybody, the people we’ve mentioned in this list are the ones we believe to have the ability to make something special out of their hypothetical time in America and out of this special time for pro wrestling fans.