The Summer of 2021 has proved to be a massive success for All Elite Wrestling, thus far. Surprises, debuts, and, insanely entertaining matches throughout July will be capped off by another special edition of AEW Dynamite called Fight For The Fallen. Both nights of Fyter Fest have come and gone and it was tremendous, to say the least. It seems like it will not stray away from the path on Wednesday night as AEWbrings yet another week of All Elite action.

A “Murderhawk Monster” fresh off his massive title win will have quite a night on his hands against a six-foot-eight Tongan looking to pry away the gold. “The Painmaker” carries on with his labors and will face one of the most, if not the most, ultraviolent game-changing man he will ever battle. And, a Cowboy leads a battalion against Elite competition sparring it out for all the chips on the table. Don’t blink or you’ll miss it. There’s so much more in store for this week’s Dynamite and fans could not be more excited. Let’s run down the Fight For The Fallen Card

Chris Jericho was victorious last week on Night Two of Fyter Fest in his first of five labors against Shawn Spears when he hit The Judas Effect for the three-count. Despite the stipulation firmly against him, the “Demo God” walked away triumphant while MJF seethed with anger in the commentary booth. Jericho was riding high, at least for a moment. He did outlast Spears, but this is just the first of a long journey to finally get his grip on MJF once again. Not to be outdone or outshined, Maxwell Jacob Friedman immediately rained on “Le Champion’s” parade. Right after the match, he announced the second labor for Jericho to endure. And, it was none other than “The King of Ultraviolence” Nick Gage.

Everyone was flabbergasted when Gage walked through the tunnel, with a pizza cutter in hand. This was, no pun intended, truly game-changing. Nick Gage is one of the most hardcore and sadistic competitors ever to lace up a pair of boots. This man will literally go through anything and everything to maim and mutilate his opponent and the victory that comes with it is just seemingly the cherry on top. Not to mention, at Fight For The Fallen, the match will be contested under a “No Rules” stipulation.

Nick Gage will be firmly in his element and will paint the canvas in crimson red before the night is done if he has anything to say about it. But, don’t count out Jericho just yet. Chris made it firmly known that he will be there and he’s bringing his darkest persona with him. Ladies and Gentlemen, “The Painmaker” will be in full form come Wednesday night and he is not afraid one bit. This might be the toughest test yet for Jericho. And, if there is one thing promised, blood will be spilled on that night. Will Chris Jericho be able to survive labor number two or will Nick “F’n” Gage crush the dreams and drag the lifeless body of one Chris Jericho in his AEW in-ring debut?

Battle of the Monsters 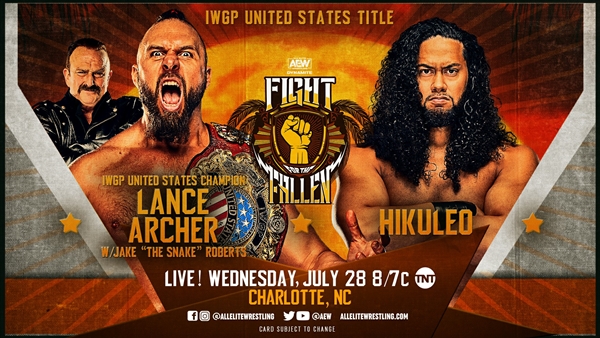 Lance Archer came out of a grueling and violent “Texas Death Match” holding the IWGP United States Title. Jon Moxley pulled out all the stops but was unable to retain the gold as “The Murderhawk Monster” proved to be too much to keep down. These two men exercised a lesson in brutality that few have ever seen before. It seemed like they were going to end each other if that meant coming away with the gold at the end of the match. Tables, Chairs, Barbed Wire you name it and they whipped it out. The straw that broke the camel’s back was when Archer finally hit the finishing blow on Moxley by driving Jon through two tables covered with two barbed wired-covered boards. Mox was unable to answer the 10-count and Lance once again hoisted up the IWGP U.S. Championship, this time in his hometown of Texas.

The celebration did not last long, as Bullet Club’s hulking monster Hikuleo made his presence felt. And, it was clear from the get-go what he wanted; a shot at the gold. Archer didn’t seem too happy but was undeterred as well. He welcomes the challenge and Hikuleo answered the call. Two behemoths collide at Fight For The Fallen and it’s sure to be the quintessential case of having “The Immovable Object” fight “The Unstoppable Force”. Strap yourselves in because this will not be pretty once the bell sounds. Wil Hikuleo take the IWGP United States Championship back home to the Bullet Club in his AEW debut? Or will Lance Archer refuse to die and retain the gold?