For years, Nick Gage was a name that struck fear in the hearts of men. To be fair, he still does. But for nearly 20 years, he was a name in the shadows, a legend in a scene that was the bastard child of pro wrestling – the deathmatch industry – that was now scoffed by a generation that had moved on from hardcore wrestling now that ECW had closed up shop. Wrestling in backyards and small venues, deathmatch wrestling continued throughout the 2000s, several times seemingly on life support, but Nick Gage always remained one of its greatest Generals – the type that led by example on the ground, with blood, sweat, and, well, more blood. But then his life took a turn and he was incarcerated for armed robbery and he was imprisoned for several years, removing him from the industry that he loved so dearly. But since his return in 2017, he has not only helped bring deathmatch wrestling to heights it had never seen, he has since transcended the niche genre to become one of the undeniable superstars in the US indies and truly become “the God of this shit!”. 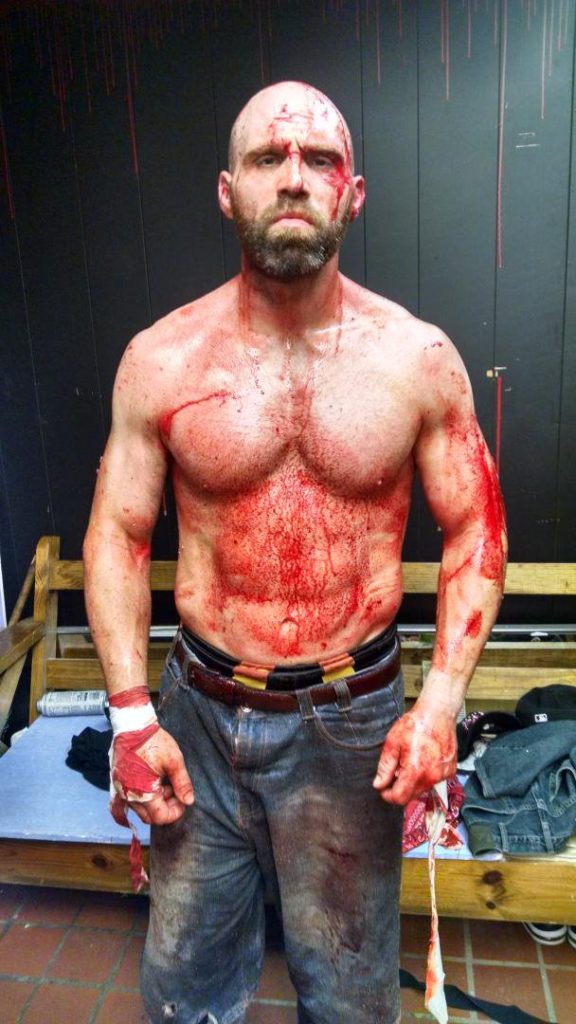 Born in Salt Lake City, Utah but raised in National Park, Gloucester County in New Jersey, Nick Gage began his career in pro wrestling in 1998, when he was trained by John Zandig, an indie wrestler from New Jersey who competed for NWA New Jersey. Zandig was on the verge of starting his own revolution, as he founded Combat Zone Wrestling (CZW) the following year, debuting in 1999 with CZW Opening Night on February 13. Zandig would populate the early roster of CZW with his own students, including Nick Gage and his brother, the recently departed Justice Pain, as well as other wrestlers who gravitated more to the hardcore stylings of ECW at the time that the TV product of WWF or WCW. But CZW went beyond ECW’s version of “hardcore”, more akin to Kentucky’s IWA Mid-South (owned by former ECW star Ian Rotten) who had opened up in October of 1996, and incorporated some of the more ultraviolent methodology of Japanese promotions like Atsushi Onita‘s Frontier Martial-Arts Wrestling (FMW). It didn’t take long for Nick Gage to become the star of CZW, becoming the inaugural CZW World Heavyweight Champion in 1999.

While CZW would see many future stars go through the company during the 2000s, such as AEW’s Jon Moxley, IMPACT’s Sami Callihan, deathmatch giants like Lobo, The Messiah, Drake Younger, Rickey Shane Page, Matt Tremont, and MASADA, plus other stars like Chris Hero, Super Dragon, WWE’s Drew Gulak, ROH’s Jonathan Gresham, IMPACT’s Rich Swann, and NXT’s Isaiah “Swerve” Scott and Oney Lorcan, CZW was very much the house that Gage built. By 2010, he was a 4x CZW World Heavyweight Champion (his longest reign 217-days), 2x CZW Iron Man Champion, and 5x CZW World Tag Team Champion, usually alongside the late Nate Hatred in the H8 Club. While deathmatch wrestling had been reduced to a cult following in the US, it still thrived overseas. Nick Gage also competed regularly in Japan for Big Japan Wrestling (BJW), and in 2000 won the BJW Tag Team Championship with Zandig. He last appeared for BJW in 2010.

But as his star continued to rise in the ultraviolent world of deathmatch wrestling, behind the scenes his life was beginning to spiral out of control. He’d already lost his father to cancer earlier, but the loss of his mother to the same disease in 2007 hit him hard and it only amplified a silent addiction that was about ready to shed the darkest shadow on a life that, in the ring, already looked like it was wildly out of control. Due to mounting injuries due to the deathmatch lifestyle, such as the infamous arm injury from 2009’s Tournament of Death 8, Gage had developed a crippling addiction to Oxycontin and other pain killers that only worsened following his mother’s passing. But it hit a new low on December 22, 2010, just before Christmas, when Nick Gage walked into a bank in Collingswood, New Jersey, and committed armed robbery.

“To be honest with you, it was spur of the moment,” he told the Collingswood Patch from prison in 2011. “I didn’t wake up that morning and say, ‘I’m going to take this bank down today.’ I had no money, nowhere to go.” That day, Nick Gage walked into the bank and handed the teller a note. “I was actually really nice,” to the teller,” he told the Patch, “I even said ‘thank you,’ when she gave me the money and ‘it’s going to be OK.’ I walked in and robbed a bank, and walked out not knowing how to get out of there (the borough) at all.” With $3000 in his pocket from the heist, he took his girlfriend to the casinos of Atlantic City, and it was there that she found out he’d robbed a bank – after seeing his face come up on the evening news. It didn’t take long for wrestling fans to recognize the face on their TV sets, and soon the police were on to him. But ultimately, Nick Gage would turn himself in, where he was arrested for armed robbery and sentenced to 5-years in prison. “I realized what I did was wrong,” he told the Patch in 2011, “and wanted to start the New Year on the right foot.”

During his time in prison at Camden County Jail, Nick Gage entered a drug rehabilitation and treatment program to beat his addictions. On March 31, 2015, Nick Gage was released on parole after serving 85% of his sentence, and he immediately returned to the sport he loved, but this time he was clean and more focused than ever. He returned to CZW to face new rising star Drew Gulak and also made debuts with Game Changer Wrestling (GCW), Beyond Wrestling, and Ohio’s Absolute Intense Wrestling (AIW), but his comeback would hit a snag. That September, he had a parole violation and returned to prison to complete the final year of his original sentence. He was released outright in November of 2016.

If Nick Gage was determined in his initial comeback in early 2015, he was now fiercely driven in his return in 2016. He made his return debut at GCW’s Tournament of Survival 2, defeating BJW and FREEDOMS star Masashi Takeda and GCW upstart Jimmy Lloyd in the early rounds before beating Matt Tremont in the finals, and immediately made GCW his new home promotion, spurning CZW, the company he was born into for 12 years (Zandig had sold CZW to DJ Hyde in 2009). His return drew returned focus on the deathmatch scene, as a real convicted felon had returned to cause more mayhem in an industry he absolutely adored. On the back of Nick Gage, who held the GCW World Championship an incredulous 722-days from 2017 until late 2019, GCW has become not only one of the top deathmatch companies in the world but one of the fastest rising US indies on a global scale. While his criminal record no longer allows him to join his GCW crew in Japan, he has since made his Mexican debut, competing for Mexico’s deathmatch leaders, Desastre Total Ultraviolento (DTU).

But it hasn’t just been the deathmatch scene that his return has ignited – it’s all of the US indies. He returned to Beyond Wrestling and became a regular feature attraction, become a main event star with AIW, and has lent his skyrocketing star power to such promotions as AAW Pro, Bar Wrestling, Black Label Pro, St. Louis Anarchy, Glory Pro, and more – he even managed to work his way into the family-friendly confines of CHIKARA. In July of 2019, he made his debut with AAA Lucha Libre, arguably Mexico’s biggest promotion, in a four-way match with Pagano, Joe Lider, and Psicosis at a AAA/Promociones EMW event in Tijuana.

Since his return in late 2016, Nick Gage has been compiling more singles gold on top of his GCW World title – he’s also a former AIW Absolute Champion, IWA Mid-South Heavyweight Champion, Horror Slam Deathmatch Champion in Detroit, and Insane Championship Wrestling (ICW) Heavyweight Champion (Wisconsin’s ICW, not Scotland’s). He’s also the reigning On Point Wrestling (OPW) Heavyweight Champion out of New Jersey, where he’s just passed the 300-day mark. In 2019, he made mainstream press when he fought Hollywood actor and former WCW World Heavyweight Champion David Arquette in the actor-turned-indie wrestler’s first (and last) deathmatch.
Nick Gage continues to incite a riot-like presence no matter what promotion he appears on – his fan base are a rabid lot of men and women alike who he refers to as his Murder Death Kill gang (MDK) who ravenous try to touch the deathmatch icon in a scene like a Rob Zombie-directed scene from an early 60’s Beatlemania moment. The controlled violent moshing and hugging from fans and Gage alike seems almost surreal and you can feel the energy through whatever television device you’re watching on (although it’s a thousandfold in real life). And through it all he’s remained humble and appreciative of his refound success, progressing with the times and not only embracing intergender matches but having some of the best matches of his career against the likes of AEW’s Kris Statlander or former IMPACT World Champion Tessa Blanchard. He also recently took a powerful pro-trans rights stance on Social Media.
The likelihood of a character like Nick Gage arriving in the WWE Universe, or even All Elite Wrestling, are probably slim to none, simply for his ultraviolent exuberance, but that suits Gage himself just fine. “I think independent wrestling is awesome right now,” he told Fightful.com last June. “It’s on fire. Every show I do, fans are showing up in flocks and it’s awesome. You know, anywhere where you can work every weekend and make money is f*cking awesome. Independent wrestling is on fire right now and if anybody has anything bad to say about it, f*ck them.” With indie wrestling making its comeback from the COVID shutdown, he’s already wrestled for three companies and five matches since his return mid-June – on the West Coast with FIST Combat, as well as regular haunts GCW and ICW No Holds Barred – with many more matches set for the rest of the year.
It should almost come as no surprise, but after such a harrowing year that has seen pandemics, murder hornets, economic problems, and social justice protests, that such a raw and honest man that projects such angered concern would become the hero that pro wrestling needed most. Nick Gage has shown in his remarkable comeback in 2017 that he truly is “the God of this shit”.

Stay tuned to the Last Word on Pro Wrestling for more on this and other stories from around the world of wrestling, as they develop. You can always count on LWOPW to be on top of the major news in the wrestling world.  We provide you with analysis, previews, videos, interviews, and editorials on the wrestling world.