On March 23, 2001, the landscape of professional wrestling changed forever. On this day, the World Wrestling Federation purchased its most prominent competitor, World Championship Wrestling. For better or worse, Vince McMahon bought his competition for a total of $4.2 million. While the latter years of WCW were a far cry from the promotion’s glory days, its closure was bittersweet. A brand that began in 1988, steadily becoming an empire, was no more. Once the initial sadness subsided, fans were left buzzing. How would McMahon and company utilize what they invested in? Would the first WCW match on WWF programming come to fruition?

The First WCW Match on Monday Night RAW – An Introduction

Only a few days after, on Monday Night Raw, the nefarious businessman himself gloated. Vince McMahon stroked his ego on both his own TV program, which took place in Cleveland, Ohio, and the final episode of WCW Nitro in Panama City Beach, Florida. What the Chairman of the company didn’t expect, however, was his son, Shane McMahon, crashing the festivities in his own way. Live, on WCW Nitro, Shane pulled a fast one on his father. “The name on the contract does say ‘McMahon,” said Shane. “However, the contract reads, ‘Shane McMahon.’ That’s right – I now own WCW!”

As many old-school wrestling fans know, this eventually led to World Championship Wrestling, as well as Extreme Championship Wrestling, stars invading WWF programming. Ultimately, WWF’s locker room would unite against the combined efforts of WCW and ECW, known collectively as The Alliance. What happened prior to this, however? During the late spring and early summer, various WCW-contracted wrestlers invaded WWF programming. Seeing the likes of Lance Storm and Booker T storm shows, laying waste to WWF Superstars, was nothing short of surreal. These moments were intended to build to something greater.

Building to the Match in Question

Reportedly, the idea was for WCW to “invade” one of the WWF’s flagship programs – either Monday Night Raw or Friday Night SmackDown – and render it a WCW program. Both shows would feature unique rosters and storylines, perhaps with the two crossing over at pay-per-view events. While this was a novel concept at the time, it needed to be tested before being put into action. The testing phase took place on July 2, 2001, in Tacoma, Washington, at the Tacoma Dome. The final twenty minutes of Raw switched gears and became a WCW program. Despite the ambition behind the concept, it was negatively received and has only aged poorly over time.

This wasn’t for lack of trying, however. The stage was set for the first WCW match on Raw in different respects. First, the traditional WWF graphics were exchanged for newly-branded WCW images, including a new logo to represent the brand. Second, WCW had its own ring announcer in Stacy Keibler, referee as Nick Patrick, and commentators Scott Hudson and Arn Anderson. The commentary team was especially strong; Hudson provided commentary in a sports broadcasting fashion while “The Enforcer” offered insight as a veteran of the squared circle. For many fans, this is where the positives end.

The first WCW match on WWF soil pit Buff “The Stuff” Bagwell against then-WCW World Heavyweight Champion Booker T. While not a main event star, Bagwell was a relatively popular star in WCW, largely due to his energy and charisma. Though he may not have been given the best angles to work with – Judy Bagwell, to name one example – he remained a solid lower-to-mid card talent. He was also a 5x WCW World Tag Team Champion, meaning that he had some credibility to his name.

Booker T, on the other hand, was a top player in WCW until its final days. By the time the promotion closed its doors, Booker was a 10x WCW World Tag Team Champion, each title won alongside real-life brother Stevie Ray as Harlem Heat. Booker enjoyed moderate singles success as well, both as WCW United States and World Television Champion, but it wasn’t until July of 2000 when he won his first world championship. In WCW, he won the World Heavyweight title five times, an accomplishment he would routinely tout once he made it to the WWF. Despite the vastly different statuses of Bagwell and Booker, there was an air of excitement surrounding their upcoming match. That was, however, until the bell rang.

Until July, neither Bagwell nor Booker wrestled since March. It was clear that these two competitors weren’t in ring shape. They certainly looked as they did on WCW programming. The truth, though, is that physical stature alone doesn’t dictate one’s wrestling ability. One could argue that if they had time to train and work off the rust they developed over the past few months, the match would have been smoother. However, it may not have changed the way the crowd reacted.

Almost from the time the bell rang, it was clear that the WCW stars were wrestling in enemy territory. Choruses of boos and chants including “you can’t wrestle” and “this match sucks” illustrated how the WWF fans felt about their show being invaded by wrestlers from the company down south. Would the match have been better received if it took place in a location more closely associated with WCW, such as Atlanta, Georgia? It’s possible, but it may not have changed the way the match unfolded. Fortunately, it would be cut short – at a little under five minutes, no less – due to interference.

Storming the ring were Kurt Angle and “Stone Cold” Steve Austin, the latter of whom had significant issues with Booker T since the 5x WCW World Heavyweight Champion attacked him at King of the Ring months prior. Angle, Austin, and even Bagwell took part in the beatdown, attacking Booker from the ring to the backstage area. It would ultimately result in Booker being thrown out of the area and into the streets of Tacoma. Bagwell believed he found new allies in Angle and Austin. However, it wasn’t long until they threw “The Stuff” out into the streets as well; a chaotic yet underwhelming conclusion to this hyped match.

Needless to say the “WCW trial run” was an abject failure. Not only did the match fail to deliver but it was apparent that the WWF fans were less than receptive toward what they were presented. This can’t be entirely blamed on the fans, however. Consider that, for years, WWF diehard viewers were conditioned to believe that WCW was the enemy. Why should anyone that hasn’t watched any other wrestling care about Buff Bagwell or even Booker T? The latter would do well for himself in time, as history has shown. Nonetheless, on July 2, 2001, it wasn’t apparent that WWF loyalists weren’t buying what was being sold to them.

In fact, if any positives could be gleaned from this match, it’s that Booker T had a successful run while under contract with Vince McMahon. The 5x WCW World Heavyweight Champion would win multiple tag team titles and singles titles, including WWE’s World Heavyweight Champion late in his career. Despite arriving in WCW as an outsider, he built support among WWF fans, which took him to greater heights. He may not have carried the company on his back but given how poorly other WCW stars fared, especially during this period, Booker’s success in WWE can’t be denied.

Similar success in the WWF eluded Buff Bagwell, however. The first WCW match on WWF soil would become Bagwell’s final match in the company, too. By various reports, “The Stuff” generated heat from not only his peers but management as well. It also didn’t help that, even in WCW, he was never positioned above a certain level, so the idea of competing against the reigning WCW World Heavyweight Champion beggared belief. Bagwell would work the independent circuit, as well as make sporadic appearances for NWA Total Nonstop Action early in the promotion’s life. 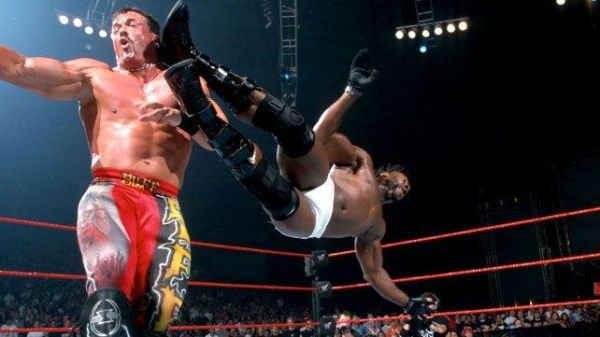 The First WCW Match on Monday Night RAW – In Closing

The Invasion angle is worthy of a column all its own. Without going into excruciating detail, it was a failure all its own. Whether it was a lack of notable WCW stars being involved, the lion’s share of the angle being committed to the McMahon family rivalry, or a combination of factors, “missed potential” doesn’t even begin to describe the angle at hand. What would happen, however, if the first WCW match on Raw did well? Would a WCW brand on WWF programming do big business?

Unfortunately, the world can only look back on what’s written in the history books; professional wrestling is no exception. What history illustrates is that the first WCW match on WWF soil failed to live up to expectations. It was also an omen of sorts as the company moved forward with the Invasion storyline. WCW as a company died and it wasn’t long after that the brand took an indefinite dirt nap beside it.