It’s almost time for the fifth round of matches in the One of a Kind Tag League. As ChocoPro approaches the conclusion of its first-ever tag league, it’s fair to say that the teams involved have competed at high levels. There is only one team that can stand tall above the rest in Gatoh Move Pro Wrestling, however, and emerging supreme in the One of a Kind Tag League will provide them with the platform to do so. ChocoPro #131 is fast approaching and here’s what viewers should know heading into this show. As always, it will air live on the official Gatoh Move YouTube channel. 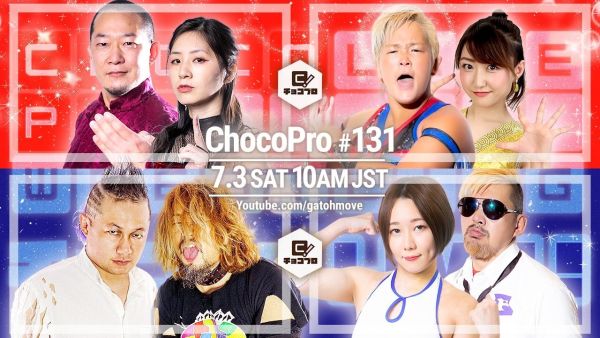 One of a Kind Tag League Block A Match: Dragon Ninja (Sayuri and Chon Shiryu) vs. Wasshoi Aniki (Ayumi Hayashi and Ryo Mizunami)

Dragon Ninja enters ChocoPro #131 with a 0-2 record in the One of a Kind Tag League. This makes them mathematically unable to win the tag league, meaning that they will wrestle the remainder of it for pride. In other words, the best that Sayuri and Chon Shiryu can do is make their mark on the board. Effectively, they’re playing the role of the spoiler team in Block A, potentially derailing the efforts of other teams in their block. This upcoming match will be no exception, as they take on the spirited, party-loving duo of Ayumi Hayashi and Ryo Mizunami, collectively known as Wasshoi Aniki.

ChocoPro #130 was a show of indecisive finishes. In their tag league debut, Wasshoi Aniki took on the Asia Dream Tag Team Champions, Best Bros. Hayashi and Mizunami put forth a strong effort, perhaps one that was too strong. This match resulted in a 20-minute time limit draw, each team scoring only 1 point. Despite this, Best Bros remain at the top of Block A. Hayashi and Mizunami will be looking to recapture their momentum over Dragon Ninja, who will not make such an endeavor easy for their spirited opponents. Can Wasshoi Aniki overcome the efforts of the illusionary spoilers? Tune in tonight to find out.

One of a Kind Tag League Block B Match: Melt Brain Dancing (PSYCHO and CHANGO) vs. Mi✰Sayaka (Minoru Fujita and Sayaka)

It’s safe to say that, following ChocoPro #130, Melt Brain Dancing will enter Ichigaya Chocolate Square none too happy. Much like the One of a Kind Tag League Block A match on the same episode, PSYCHO and CHANGO’s encounter with White Comaneci reached a time limit draw. Simply put, White Comaneci fared well as the spoiler team of sorts. Despite this, at 3 points, Melt Brain Dancing remain atop Block B, which may put them in contention for the Asia Dream Tag Team Championship a second time. To do so, they will have to overcome a team that perhaps many members of the ChocoPro faithful didn’t know what to expect from.

Despite being a thrown-together team, Mi✰Sayaka have been impressing in the One of a Kind Tag League. On ChocoPro #129, they made their tag league debut in a major way, with Sayaka picking up an upset pinfall victory over Tokiko Kirihara of White Comaneci. Sayaka has shown incredible fire in the match, boasting hard-hitting offense. This perfectly complemented Minoru Fujita’s wrestling style, which has been defined by deathmatch wrestling. Mi✰Sayaka is a team with the potential to leave ChocoPro #131 with a 4-0 record. To do so, they will have to be ready to do battle with the chaotic Melt Brain Dancing.